From Uncyclopedia, the content-free encyclopedia
Jump to navigation Jump to search
“Your article hits the bull's eye. I'll report it to the WSPA.” 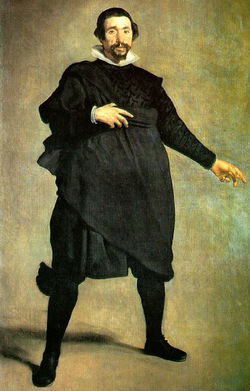 Felipe Romero, ready to leave his home, never to return (little did he know).

Those obsessed with so-called experts should thank their lucky stars that Wikipedia does not have an article about Felipe Romero.

Felipe Romero (born 1643 in Málaga (Spain), died 1704 in Paris (France)) was the grandfather of the first "common" Spanish torero, Francisco Romero. Felipe went to see te Pope Clement IX, in order to ask the good man to condemn bullfighting as unworthy of noble people. Whence such a strange idea? Read and learn, kiddies!

Romero owned a fine cattle-farm near Málaga, where he raised very acclaimed "toros bravos" or fighting bulls, and trained them for corridas. He happened to be fed up with the nobles' having the privilege of bull-fighting, which they did seated on a horse, while "lesser" men ran around to divert the bull from their master when things came to look ugly. Romero wanted to make it a real people's art, but wasn't in the position of convincing the nobles of dropping their favorite passtime.

Upon a beautiful spring day in 1669, he heard a noodly voice whispering: "Go talk to the Pope, and make him see that fighting bulls is unworthy of noblemen. Go over land, take the Santo Grial from the cathedral of Valencia, and offer it to the Pope. RAmen!"

So Romero set off to Rome: with the Pope condemning the corrida for noblemen, this noble art could be performed by common men, afoot. He saw a bright future in this for his own son Antonio, one year old at the moment of the revelation, and for further probable descendance. When he left Málaga, he told his wife Conchita of the Grial scheme, and she told their son at the moment of his majority, and he told his son, and so on...

The Holy Grail of Valencia, duly supervised by His Noodlyness

Following the Mediterranean Coast to the North, he came in Valencia. The cathedral of that city was known for its hosting of the "Santo Grial" (the Holy Grail), brought there during the papal troubles of the XIVth Century. You know, when the French King Philip IV installed the Pope in Avignon. In Valencia the Holy Grail would be safe, but it was no secret that, once settled in Rome again, the successive Popes wanted it back. Dearly. While His Noodlyness diverted everybody's attention by singing "Vamos a la playa" and performing a stripping act, Romero sneaked into the cathedral, hiding in his left coat pocket an object that looked more or less like the Santo Grial. More or less, because on the bottom, it bore the inscription "Esto no es el Santo Grial" ("This is not the Holy Grail"). That way, once he would have delivered the Real McCoy in Rome, the Pope could claim possession of the original, leaving it to the people of Valencia to check their fake.

The way that didn't lead to Rome[edit]

So far so good: he got away with the substitution. But, alas! Once the Pyrenees crossed, he got lost. His lack of knowledge of the French language wouldn't have been such a problem, if "all ways led to Rome", as the old saying goes. But the only way the French people could show him, was the way to Paris, because that was where all ways led during the reign of Louis XIV. Or to Versailles, depending of the King's humour. In Paris, Romero was picked from the streets by Louis Casserole, the King's private teacher and inventor of the "Froggy Talk" phonetical notation system. Casserole was eager to expand his knowledge of Spanish, and liked the young, lost and wealthy Spanish bull-breeder. He made a deal with the stranger: they would learn each other's idiom.

Casserole, having freshly been invited at the XVII Disciples Oval Table, who would hold their First Convention soon, felt that the Spaniard's presence could add some colour to the Oval Table, and show his own capacities in teaching languages at the same time. A sort of Professor Higgins "avant la lettre", as the French saying goes. The other Disciples knew very little of Spain, except that it was the "other enemy" (the "one" being England) and that they tended to fight bulls, now and then, when they weren't fighting another European country.

The point of no return[edit]

Romero was so thankful to Casserole and the Disciples, that he couldn't decide to leave Paris. The presence, at the First Convention, of His Noodlyness, who had inspired to him the Grail scheme, had to do with it too. He felt himself obliged to leave the Grail with the Disciples, but couldn't part from it. So he stayed, and died eventually in Paris.

Felipe Romero hadn't abandoned his family, although he couldn't be in their midst anymore. Having established a cattle-farm just outside Paris, in Saint-Cloud, he could send them money on a regular base. He had developed an interesting breed, which he had named after the specially designed pen he kept them in. Mixing up French and English (also learnt from Casserole), he named the bull-breed "Le Pen". The breed still exists. But, unlike the bulls he had bred in Málaga, the "Le Pen" breed wasn't really a fighting type, rather noisy, and often moody. They only proved useful after having been transformed into oxen, pulling carts. 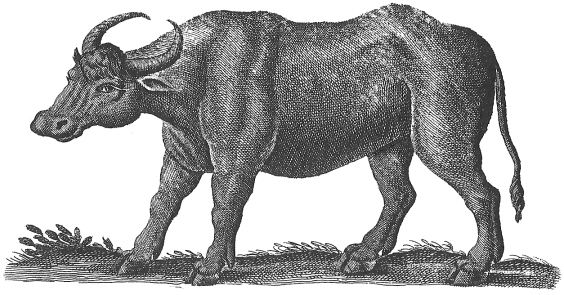 A contemporaneous image of the "Le Pen" bull. This animal looks nice, because it has already been "transformed".

Although the Santo Grial never fell into the Pope's hands, bull-fighting eventually did become a people's art. The first Spanish "Borbón" King, Felipe V, didn't like the spectacle. So that took care of that. With Francisco Romero, Felipe's grandson, the corrida became what it is today.

The Holy Grail stayed in Paris. Nobody knows where, nowadays, but I wouldn't be too desperate about that: keep browsing these pages... The "Valencianos" don't know theirs is a fake. Unless one of them reads these pages. Oooops!