“They didn't invite me because I can man a Round, Oval or Polygonal Table all by myself!”

The following BIG work in progress will show you, some day, all the high-class details about the most famous Oval Table since King Arthur's Round One. Resarch has already been done on a few of its most prominent members. 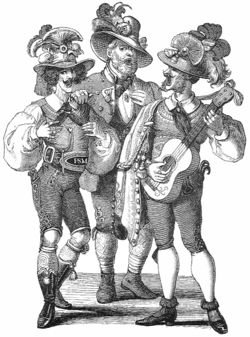 January 1669. The French Meteorologists' Guild goes on strike, bestowing upon Paris the toughest winter in the history of France. The Seine river lays frozen, people stand frozen in soup cues, the ice cream prices are at their lowest. Not suffering however, are the mighty, the wealthy and the privileged, who can afford to stay near Sunny King Louie. One of them is the young Flemish Pirate Jean Bart, invited at the Court because the king wants to negotiate a deal with this sailor. During his stay, Jean Bart meets some interesting folks, and gets befriended with Molière, Jean-Baptiste Lully and Jean de la Fontaine. A noodly Muse enhances their gatherings, and inspires the idea of expanding the group, and organizing yearly Conventions. Jean Bart also proposes the name "French XVII Disciples Oval Table", honouring thus:

They only get as far as XIII Disciples, but with Jean Bart's adding the portrait of the long deceased Simon Stevin and reserving a seat for the Muse, whom at that moment he is the only person able to actually see. Louis XIV, although invited, will not attend personally, but sends the French Royal Dolphin and his former private teacher Louis Casserole instead. He also sends an invite to the Russian Czar. So, finally, they end up with roughly XVII Disciples at the time of the First Convention in 1670, and will keep that number till Molière's passing away in 1673.

From the First Convention in 1670 on, they gathered each 3rd friday of January, and kept gathering during a week, closing the convention with a solemn ceremony on the 4th friday of the same month.

What did they talk about?[edit]

Their items will be disclosed for the benefit of the larger audience, once their "minutes" have been investigated thoroughly. This investigation has already (more or less) shown their avoiding of politics and religion, those being the jealously garded domain of the King. When their Constitution will be investigated more thoroughly, and ready for publication, more will be divulged here. And there.

King Louis XIV, represented by his then retired Royal Dolphin[edit]

He couldn't bother to come, but since the Dolphin was free... Remember: once Louis was considered able to occupy his throne by himself, the Dolphin had gone to the Royal Dolphin Aquarium.

Improvised the speeches during the gatherings

Wrote the lyrics of the Oval Table's anthem, "For he's a jolly Disciple". Brought with him Stevin's famous waffles recipe.

Wrote the music of the Oval Table's anthem, "For he's a jolly Disciple". Baked the waffles after the meals.

One of the Founding Fathers of the Oval Table.

The Tambourine Wench: the only female Disciple! 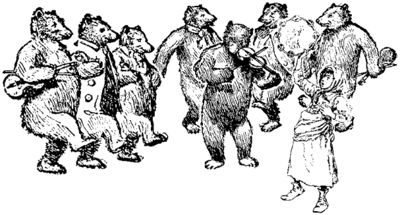 Elisabeth Lajoly as the Tambourine Kid and her bears. That's how she remembered her youth: she made this drawing especially for the Disciples.

Honorary Member, at the instance of Jean Bart. Represented by his portrait, because of deceased.

Would do anything to sell his sunglasses, including infiltration.

Descartes and Pascal owe him!

Substitute for the Russian Czar till 1798.

Brought the Holy Grail from Valencia to Paris.

He only got out of prison between the 3rd and the 4th friday of January.

Inventor of the "Blue Jeans".

Investigated his long and creative dynasty.

During the Twenty-seventh Convention (January 17-24 1696), Jean Bart clearly ignores the Royal Dolphin, probably because of the King's bombing of his native city Brussels the year before. The animal kingly pretends to ignore it's ignored, Jean Bart piratically pretends to ignore that his ignoring is ignored, and so on... Even the waffles couldn't restore their former friendship.

The waffles Lully baked after each meal they shared were famous. They represented Simon Stevin once more, because Molière's parents found the recipe in their "new" apartment where Stevin had lived till his death. Amazing how much this insignificant detail occupies people's minds! Look at all the lonely people roaming through these pages searching for waffly information!

Not a difficult question at all: just take a look at the French XVII Disciples Exhibition.

What happened with the docs and props?[edit]

During 30 years of Conventions, some stuff got collected, like the Santo Grial and Stevin's portrait. The longest living Disciple, Elisabeth Lajoly de Laba, took them with her to Dunkerque, where she put them in a specially designed cellar. Unfortunately, she hid the entrance a bit too well, and the world is still waiting for a building society to excavate the right spot. More fortunately, some of the documents (like the waffles' recipe) have been copied before the Oval Table ceased to exist. Where do you think all this information came from, huh? Still, lots of it still have to be investigated, and fakes have to be discerned from the Real McCoy.