Those obsessed with so-called experts should thank their lucky stars that Wikipedia does not have an article about Elisabeth Lajoly de Laba. 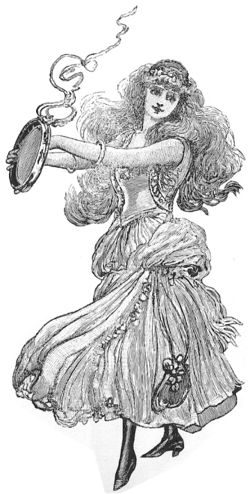 Elisabeth the way she wanted to be remembered: she drew the portrait herself shortly before her death.

“Wenches and Sea Snakes: birds of a feather!” 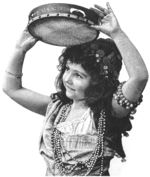 The Tambourine Kid in action

As a child, she had a very peculiar way of helping her poor family. On Dunkerque's market day, she led a company of seven ferocious looking bears, and kept them tame through her dancing and tambourine playing. A passing-by drawing artist was so charmed, that he made a drawing of the Tambourine Kid[2], and offered her a copy of the final engraving.

Rumour had it she was able to dominate each and every living creature that way. That's also where she saw Jean Bart, Pirate-to-be, crashing his land yacht into the vegetable stall in front of the belfry. The first thing Jean saw after having freed himself from a load of veggies, were seven huge bears. And a nice girl, leading them with her tambourine, not unlike an Indian fakir hypnotizing a snake.

When Jean started his little Pirating Enterprise, he had heard some Shivering Sea Snake Stories (SSSS) too much, and thought the girl with the bears could charm any Sea Snake that might appear during his journey. She was thrilled by the proposal, and went with him. Well, she was also a bit in love with this handsome sailor, of course... They never parted since this first "contract".

A contract she pulled with much virtuosity. The very sight of this Wench, dancing and playing the tambourine on deck, facing fierce legendary creatures no sailor lived to witness off! Jean Bart's crew was the first (and only) to survive such encounters, thanks to Elisabeth. 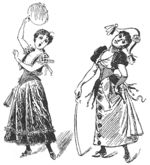 Our Wench in action: rehearsing her Sea Snake charming routine, and preparing for battle. Her own drawing, contemporaneous this one. Mark her visionary hat model! 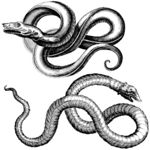 Two specimens of the creatures she managed to calm down and steer away from the ship. Engravings taken from one of the many books her drawings appeared in.

She also appeared to have a great drawing talent, and made many sketches of the creatures they met. Such drawings were in high praise with book publishers, and so she could earn an extra sou for their little household.

Some of her most cherished instruments. From top to bottom: a little single-row tambourinette she used as a kid, the model she used when she met Jean Bart, and finally the genuine Lafitte Jinglemaster MkVII her Pirate offered her at their wedding.

The only Disciple Jean Bart brought to the First Convention (not counting in the portrait of Simon Stevin, of course) was a female one. Elisabeth, for those who aren't paying attention, back there! Her fascinating abilities made her a most welcome member, and her dancing was much praised. Her drawings illustrated Jean's stories, and no picture went to a publisher before the Disciples had seen it first! Although reputed one of the most caring and loving creatures of the XVIIth Century (not easy in them hard days!), she could hate as well. When, in 1695, the King closed the Female Sorbonne Experiment and bombed the native town of her beloved Pirate, she cast, together with Mademoiselle A.B.S. Bouti, a very evil eye on Louis XIV, causing his hair to fall out. After years of promoting the wig "Made in France" with his own massive hairdo (pretending it was a wig, keep following there!), all of a sudden he really needed one!

Elisabeth survived Jean Bart for many years, and was a highly estimated person in Dunkerque, where she had returned after nursing Jean Bart during his last years, in Paris. She lived in a little cottage the King had given to her, and never complained about publishers not mentioning her name, because she felt most readers of the XVIIIth Century already didn't believe anymore in Sea Snakes. Times had changed, France had entered the Age of Enlightenment. According to a manuscript[3] found wandering amongst the XVII Disciples' documents, it is rumored (although highly unlikely) that soon after Jean Bart's death, Elisabeth was determined to find a way to bring her true love back to life. Most of the people in Elisabeth's social circle were quite sure that she had lost her mind[4], either to old age or due to the effects of the bite of a small Sea Snake, which had lost its way and wandered into her garden.

More about the Disciples HERE
Retrieved from "http://en.uncyclopedia.co/w/index.php?title=Elisabeth_Lajoly_de_Laba&oldid=5951160"
Categories: