From Uncyclopedia, the content-free encyclopedia
(Redirected from Louis XIV)
Jump to navigation Jump to search

For those without comedic tastes, the so-called experts at Wikipedia have an article about Louis Quatorze. 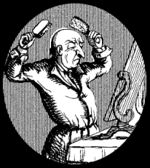 Louis Quatorze wondering if he shouldn't wear a wig after all.

“Sunglasses? Who needs froggy sunglasses in this country?”

Louis "Rabane" Quatorze (born 1638 in Paris (France), died 1715 ib.) is probably the most forgotten designer of sunglasses ever. This could be due to his having been born the same year as his soundalike Louis XIV, King of France. He spend most of his life in Versailles, trying to make the most of said peculiar coincidence. That coincidence was limited to the name and date of birth: no one could mistake this tiny person for their King, especially since he didn't follow the wig fad, which could have covered the shining bowling ball he used for a head. When in 1695 Wench Elisabeth and Mademoiselle Bouti[1] cast their combined Evil Eye on the King, he felt very happy with the Royal Baldness! Besides that, he also well known for his statement "L'baguette, c'est moi." 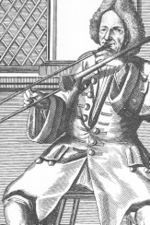 Louis XIV's trombone player refused the set of "Rabane" the other Louis offered him. The result is obvious...

On various occasions he claimed to revere spaghetti, which statement wasn't received very well by the French clergy. When asked why, he came up with a story about a "flying spaghetti monster" he pretended to have seen once, while having his dinner. Considered an artist, and therefore a bit "dans la lune" (yesterday we would have said "lunatic", nowadays we would say "looney", tomorrow we won't notice the difference anymore), he never got arrested for it, unlike his neighbour, Jean de la Fontaine, who claimed to believe in an fancy colored single-horned but nonetheless invisible horse-like animal . Now there they had a good catch, for how could he have checked all those features if the animal was invisible? Spaghetti, on the other hand, was, like everything Italian, quite popular in the France of those days. 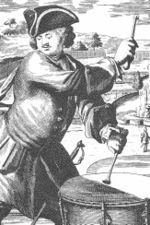 Louis XIV's timpani player tries to protect his eyes, with notable influence on his playing...

You need to be a real genius when you invent sunglasses at a time when even glasses weren't very common. But he probably hoped that his soundalike's nickname would bring him the right (and rich) clients... His most famous (or less forgotten) design was the "Rabane" line, which also provided his nickname. Alas, although he claimed that you needed his sunglasses if you wanted to look at the King without being blinded, little were his customers. A bit less famous (or more forgotten) creation were the "Versailles" sunglasses. Unfortunately, due to lack of space on those XVIIth century glasses, and his being keen on fancyful lettering, he was unable to put the whole name on them, and he had to take it down to "Versace"

The sunglasses business not going that well, he also tried poetry. One of his most obscure poems is his "Tribute to the Thong Dynasty". That poem brought him even more dirty looks from the French clergy, especially when he claimed "having been there, done that". Linguists still aren't sure about the source of inspiration, but his eventful marital life (he married five times, without ever being a widower: a feat back then, back there) might have brought him an unusual look at relationships in general and fancy dress codes in particular.

Little is known about his descendance. Some historians tried to link Louis to latter-day soundalikes, like Lewis Carroll (the math hatter) and Lewis carroll (the Minuskel Man), but them being both English, and never witnessed to have French ancestors, those links are probably not to be followed.

The SPIN line wasn't known in France at all: they were designed for the Spanish Inquisition nobody expects.

The myth of his age[edit]

In the rare manuals that handle this wonderful character, you'll find his great age mentioned. It is time to settle things once and for all!

The age myth, however, stayed.

More about the Disciples HERE
Retrieved from "http://en.uncyclopedia.co/w/index.php?title=Louis_Quatorze&oldid=5950639"
Categories: