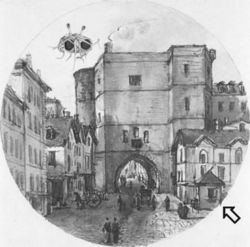 Casserole's tiny school (follow the arrow) near the Petit Châtelet in Paris. Look who's going to give His blessings to the little building (and its occupants)!
“I would have loved to follow Casserole's lessons, if only I had known any French!”

Louis Casserole (born 1585 in Paris (France), died 1684 ib.), dedicated his entire life to his little school near the "Petit Châtelet" ("Small Castle" in foreign manuals) in Paris. This humble but erudite man has had amongst his pupils some of the greatest minds of XVIIth Century France. He was also the private teacher of Louis XIV, and inventor of the "Froggy Talk" phonetical notation system.

Je pense so I am[edit]

Louis' least talented but most loudmouthed student was René Descartes, who was "ever so clever", and never stopped pointing at what he thought to be his master's mistakes. He used to begin his remarks with either "Je suis..." ("I am...) or "Je pense..." ("I think..."), and at one historical moment this irritated Louis so much, that he made up a sentence from it, "Je pense donc je suis" ("I think, therefore I am"), and ordered the little smarty to conjugate that in all possible tenses. For example:

etcetera. This had quite an unforeseen effect on Descartes' career. 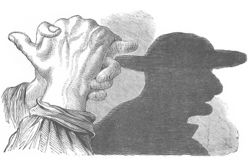 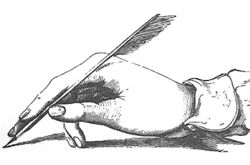 Nearly every educated person is convinced of Louis XIV having said "L'état, c'est moi" ("The state, that's me!"), thus stating that he and only he ruled in, on, about and over France. But again, it was Louis Casserole who made this sentence up, to punish his future for daydreaming along about his future ruling, instead of paying attention. So he made the young Louis conjugate that sentence in all possible tenses. For example (let's take a future tense, this time):

etcetera. It is clear, that his sentence wasn't as difficult as Descartes' one, but, hey, Kool with the King!

Cleopatra had a big nose[edit]

Louis Casserole also did a lot of research, and was mainly interested in Egypt. Not only did he punish his uproarious pupil Blaise Pascal with the conjugation in all tenses of the sentence "Le nez de Cléopâtre: s'il eût été plus court, toute la face de la terre aurait changé" ("If Cleopatra hadn't had such a big nose, the world would have been different today"), which is a statement much more difficult to conjugate than the previous ones together, it was he who hid the tablet Rosetta eventually found. Caserole surely made a lot of trips to Egypt, and had a broad understanding of the hieroglyphics. Unfortunately, the muslim world was still considered a highly hostile one, and he kept shtumm about it.

Wikipedia doesn't have a proper article about Louis Casserole. It really wouldn't help those so-called experts by writing one either.

French people have a funny way to talk, and they're not close to admitting it. Casserole was one of the few Frenchmen to notice it, the others being convinced that the English didn't know how to speak properly. Louis' trips to Egypt and other countries made him aware of the problem. It really WAS a problem, since it formed an obstacle to the spread of French culture and science, which were going ahead with leaps and bounds. Therefore, he designed a system to write down the typical sounds of the French language. With a wink at the English people, he called it "Froggy Talk". He drew some special characters, that were very close to the classical Latin ones.

The phonetic world before Froggy Talk[edit]

Let's take the name "Jean", for example. Many a Brit has stumbled on it, thinking it was a woman's name, and causing some social uproar that way. The XVIIth Century society was very "socially encoded", and many a youth found himself in front of a drawn and glimmering sword for having uttered a seemingly harmless word.

"Jean", we said. Well, before Froggy Talk came in, you had to try to explain to an average "rosbif" how

This took far too much time and/or paper, and the duel had already been fixed at dawn, right after the duel between two Wenches armed with frying pans. But now we'll see the genius of Casserole at work.

Casserole designed a kind of "z", turned the "a" upside down for being a very dark one (a hint of latent racism in such a brilliant man?) and put a tiny gulflike sign above it, and that was it.

An example from Casserole's notebook, now in the IPA Museum in Paris.

To be sure those signs could be understood, he took examples from different European languages (he travelled a lot, I told you!), to have some references. He was probably trying to combine phonetics with translation, thus forming the missing link between the Renaissance Man and the Enlightened Man.

Another example from the same notebook. Please notice how close his handwriting came to typing!

No future for Froggy Talk[edit]

The English finally remaining France's main ennemy, this very modern notation system didn't take off. Maybe he shouldn't have tried to combine phonetics with translation? Replacing its silly name by IPA, which stood for "Illustre Phonétique Adaptée", didn't help. Fortunately, Casserole's system was rediscovered in the 1880's, and thus led to the foundation in 1886 of the actual IPA, not to be confounded with the "International Polka Association", in Paris (where else could that have happened, I ask you?)

Needless to say it was he who helped Molière with his English Lyrics, and the Italian Map Joke the latter played on Lully.

In 1670, at age 85, his moment of glory finally came, when he was invited to join the "XVII Disciples Oval Table". King Louis arranged that, to make up for his own not attending (and sending the Royal Dolphin instead). To spice up the Oval Table a bit, he brought with him his most recent pupil: a Spanish bull-breeder called Felipe Romero, who brought a very intesting object to the First Convention...

More about the Disciples HERE
Retrieved from "http://en.uncyclopedia.co/w/index.php?title=Louis_Casserole&oldid=6067885"
Categories: