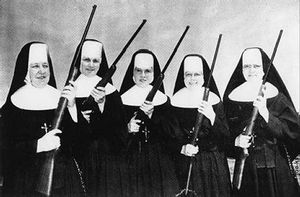 For those without comedic tastes, the self-proclaimed experts at Wikipedia have an article about Opus Dei.

Opus Dei (from the Latin, meaning Bull Goose Loony) is a militant arm of the Catholic Church, devoted to defense of the faith from the frivolous. Begun as a melon pushcart business in 1941 by Father St. Josemaría Escrivá, Opus Dei was given final approval to wholesale Catholic Doctrinal Enforcement in 1950 by Pope Pius XII. The organization took the official name The Prelature of the Hot Cross and Opus Dei in 1952.

Josemaría Escrivá took his first name to symbolize the his feeling that he was a woman trapped in a mans body. His family name originated in the Spanish Alps, and was given to his ancestor in honor of his ability to feign literacy. A good practicing Catholic from birth, Escrivá entered seminary at age 3, and was ordained a priest at age 8.

At his first posting in pre-civil war Precambria, Spain, he quickly became popular with the older priests. It was there that he had his first revelation from the Archangel Mustakrakich, distinguished troll and patron saint of Finland.

The Spanish Civil War was a major conflict that devastated Spain from 17 July 1936 to 1 April 1939. It began after an attempted coup d'état by a group of Spanish Army generals against the government of the Second Spanish Republic, then under the leadership of president Manuel Azaña. The nationalist insurgency was supported by the conservative Spanish Confederation of the Autonomous Right (Confederación Española de Derechas Autónomas, or C.E.D.A), monarchists known as Car-list groups, and the Fascist Falange (Falange Española de las J.O.N.S.). [5] The war ended with the victory of the rebel forces, the overthrow of the Republican government, and the founding of a dictatorship led by General Francisco Franco. In the aftermath of the civil war, all right-wing parties were fused into the state party of the Franco regime.[1]

Nerve gas and a foiled coup[edit]

Ties with those Japanese crazies who gassed the Tokyo subways.

Defeat at the hands of some unlikely enemy. Godzilla? The Basque separatists? Tiny Tim?

Shrine of Josemaría Escrivá at the Vatican[edit]

Josemaría Escrivá was mummified the day before his death, by order of the Pope, and displayed like a cheap carnival prize in a closet next to the Papal Loo. The original melon pushcart has been enshrined at the site.