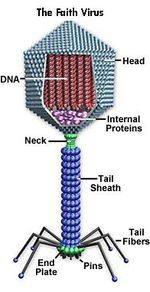 The structure of the faith virus.

Faith is a group VI reverse transcribing DNA virus that is responsible for the human mental disorder called religion, which is the chronic form of the lesser affliction called gullibility. Symptoms range widely among the diseased and can include headaches, nausea, suggestibility, lack of reason, hallucinations, paranoia, euphoria, depression, and genocidal tendencies. Humans are the only known host of the virus. Other animals may not have the necessary brain capacity for self-delusion.

The "Faith" virus commonly enters the human vessel via the optical and auditory systems. It is then carried via the blood to the brain where it infects the neurons of the cerebral cortex in the region of the frontal lobe. New findings indicate it could also infect the sex glands, the seminiferous tubules (in males) and the ovaries (in females). As a result of this, the ovum and sperm of those people can be infected, allowing the "Faith" virus to be easily carried to the next generation.

As well as person to person transfer of the virus, the other major danger is infection via contaminated paper. The "Faith" virus can be harbored for many years on the surface of the paper itself, laying dormant and resurrecting itself at the touch of human flesh. Although paper is the main vector for the virus today, it was once transferred by papyrus, animal skin and clay.

Offshoots of these viruses include the more serious genus types of "Fundamentalis"; A species example being "Fundamentalis islamica", a virus type which has recently undergone multiple population explosions.

As mentioned previously, symptoms range widely amongst different people and only a few symptoms are common to all those infected. 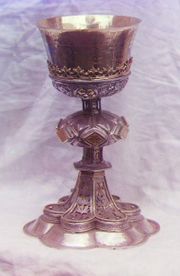 A simple delusion or the tastiest blood of all time? You decide...

The level of infection is global although there are signs of its hold weakening, notably in mainland Europe and some parts of Australasia. As you can see from the map below showing the distribution of those infected by Generalis catholica (the more benign version of Fundamentalis catholica), there are clear geographical links between most areas of infection. The infection of other areas can be attributed to missionaries who despite the best efforts of the W.H.O continue to spread this terrible virus throughout the land. 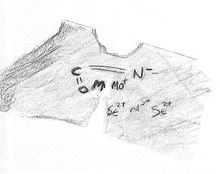 Until very recently it was thought there was no cure; however, in areas which have had the most exposure to the Faith virus (e.g. Europe) it appears as though some people are finally becoming resistant. Although there are many types of general anti-viral which work on the Faith infection (such as "Bolloxaway" and "Atheismatol"), only one type of anti-viral which specifically targets "Faith" has so far been isolated. It was discovered by renowned biochemist and anti-Faith activist Richard Dawkins and was in fact harvested from his own blood after prolonged exposure to an Anglican Bishop. It seems to work by breaking down the Faith virus and rendering it into a benign mixture of useless parts.

A strange chemical, it consists largely of Selenium (Se) and also contains Carbon Monoxide (CO), Nitrogen (N), Molybdenum (MO) and and possibly Magnesium or Manganese ("M-"). The theorized chemical formula is shown on the right. There is, sadly, some uncertainty about the first "M" element, as most of the laboratory in which the compound was discovered, and where this sole surviving scrap of paper was found, was destroyed by several massive yet very localized lightning strikes.