“After I die, I hope they dedicate a square to me in Catalonia. And I hope people sit around in it, taking drugs. Yeah, that would be a great way to commemorate me coming here to fight a war. ”

The Imperial Republic of Catalonia is a much-blessed kingdom, that may or may not belong to Spain, depending on who you ask. Catalonia was one of the original cradles of civilization; for eons, Catalonia ruled the Mediterranean seas with an iron fist (which is not easy, because iron fists sink). Then, in 1714, they gambled away the country in a game of cards. They've been trying to get it back ever since. 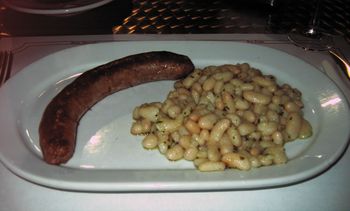 Botifarra - tastes as good as it looks.

After the Roman period and barbaric invasions, Catalonia joined the Sacred Roman Empire in order to be able to play the Champions League, while the rest of Hispania was conquered by Muslims. With the fall of the first Reich, Catalonia joined up with the Spanish-speaking kingdom of Aragon. True Catalans refused to learn Spanish and invaded the Balearic Islands, Napoli, and Sicily. The superhero behind these conquests was Jaume I, who was rewarded with his own Metro station.

In 1492 Castilla and Aragon united to become Spain, but Catalonia sent neither money nor men to the Spanish army that massacred Indians in America and so Colombus gave his ships Spanish names, instead of the names his would-be Catalan patrons proposed: Gaudí, Messi, and Gasol.

For centuries they didn't do anything but write poems about botifarra, (a big cock-shaped sausage. See left.) while their Spanish neighbours were having the time of their lives, being inquisitive. Since then, Catalans have decided that poems can also be about donkeys, moving away from the traditional Spanish focus on bulls. If you aren't sure if you prefer Spain or Catalonia, ask yourself which is better: a bull or a donkey?[1] 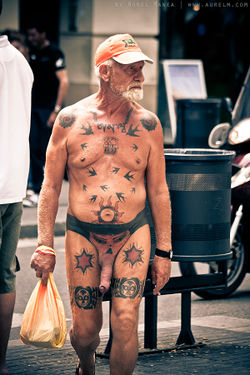 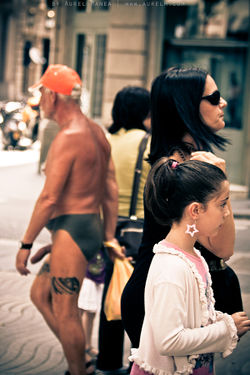 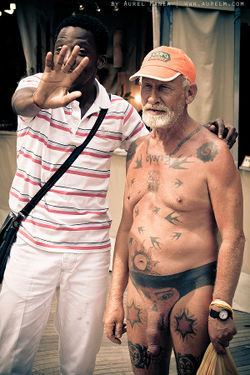 The Emperor of Catalonia, Jordi Pons, has been in power since Francisco Franco's death in 1977. Chosen after a public vote on whose cock looked most like a botifarra, he has enjoyed more than three decades of unquestioned power. His diplomacy skills are widely recognised as a major factor in Barcelona's successful bid for the 1992 Olympics. Famously, Nelson Mandela once described him as "The only politican I have met who doesn't hide behind anything."

Catalonia is therefore a great empire, or that is what true Catalans believe. Catalonia is composed of Aragón, Catalonia, Valencia, the Balearic Islands, Andorra, Languedoc, Murcia and various territories in Italy, Greece, Turkey, Morocco, Indonesia, Japan, Iowa, Nubia and Fraggle Rock. Many of these places have no idea they are in Catalonia. But they are.

Catalonia is pretty dry all year round, except the beginning of Autumn when all Catalans are washed into the Mediterranean Sea in a flash flood. This phenomenon is known as the Gota Fría, which is roughly translated as "got a cold". This, however, does not affect Catalonia's succesful economy, as the rate of construction of hotels on its coast is approximately 42 per hour. These hotels are populated by the so-called Guiris - that is, a pejorative term encapsulating Germans, Britons, Russians, Scandinavians, French, etc. In other cultures, these people are called white, but Mediterraneans call themselves white, not realising they are the mongrel offspring of Moors and gypsies. 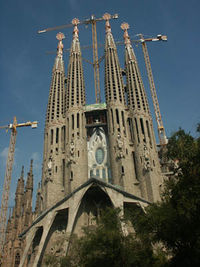 Gaudí's famous opus magnus, La Sagrada Familia. If it ever falls, that means your ass.

The royal and much-blessed official language of the great Catalan Empire is Catalan, whose origins date back to when an Italian, a Spaniard and a Frenchman working at a Barcelona tile factory swapped partners and interbred their children.

During the oppressive Franco regime the language was almost totally prohibited, and was heard only in Camp Nou and brothels. Today Catalans fiercely defend their rights to speak it, even to foreign people who are on holiday. People living in the aforementioned oblivious Catalan territories claim their languages to be different from Catalan, but the government says that they all come from Catalan, and therefore should be treated as the same language. Official figures provided by the government show that the total number of Catalan speakers is around a lot, about 600 million people, that is, around 10% of the world's population.

It must be pointed out that the main reason of the popularity of the Catalan is its great natural ability to name the naughty parts of a donkey, and the words which amuse English speakers such as dic, fart, foc, fagot and pis.[2]

Many visitors to Catalonia erroneously think of Catalan as a dialect,[3] and are completely bamboozled by its massive differences with Spanish. Below is a selection of typical phrases in English, Catalan and Spanish.

Notice that the distinctive upside down question marks and exclamation marks in Spanish are absent in Catalan, and while Spanish has acute accents (like á or é), Catalan has both acute and grave accents (such as à or è) which tell the speaker whether to look cute or serious, and whether to tilt their head to the right (eg. in "Adéu") or to the left (e.g. in "com estàs"). This discrepancy actually has its origins in the aforementioned card game of 1714. After losing, Catalonia had to give what is now Spain all of its upside down punctuation, and in exchange was condescendingly given the grave accents as a reference to the hardship that was supposed to lie ahead.

Catalonia boasts an international airport in Barcelona called El Prat, which need not be translated for British people. It has regular flights to Madrid which are classed as national or international, depending on who you ask. In any case, the tickets are so expensive that Catalans broaden their horizons by traveling to Tarragona or Girona.

Although high-speed trains are often mooted, the construction of underground tunnels is controversial in Catalonia, because if the Sagrada Familia falls down, many Catalans believe the devil will come back to reclaim the earth. 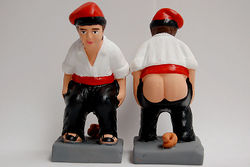 Caganer: An ethnically pure Catalan depicted pushing one out.

Catalans celebrate Christmas with two curiously scatological additions to the normal Christian tableau. The first are Caganers, pictured left. These are small figurines either depicting traditional characters or local celebrities and politicans. These are used to decorate local homes in the way normal people might use nativity scenes or boughs of holly. It is classified by the UN as "medium weird" but it gets worse.

The second aspect is the Tió de Nadal (the Christmas log), also known as Caga Tió (the shitting log), is a small piece of wood which takes centre stage in Catalan living rooms during advent. One treats it as one would a normal piece of faeces, by painting a face on it, and pretending to feed it. Then on Christmas Eve, the log magically "produces" sweets which are gobbled up by excited young children, who finish the evening feverish with excitement, their faces brown with chocolate.

It's not quite clear how this tradition began, but as local historian Dr Joanna Corey explains, "The thing is, kids find shit funny. Once you have a tradition involving shitting, it's very hard to remove it from society."

Another well known manifestation of this obsession is the saying, "Menja bé, caga fort i no tinguis por a la mort!" ("Eat well, shit hard and don't be afraid of death!"). As one of Catalonia's most famous sons, Salvador Dalí once pointed out, the expression is problematic: "My uncle was an undertaker, and he told me many people make caca in their pants before they die. Especially people who get hit by a tram," he said, making an allusion to Antoni Gaudí. "I don't see what shitting well has to do with not fearing death."

According to a statistical report released in March 2007, 61.9% of people in Catalonia are of Catalan stock, 10% South American (pejoratively called Sudacas), 10% white tourists (pejoratively called Guiris), 10% Chinese (spoken about pejoratively), 5% Pakistani (Pakis), and 4.1% Italians (curiously tolerated). This multicultural mix lies prostrate before the incredible gastronomical monolith of Pa amb Tomàquet (or crushed tomatos on oily bread for the rest of the world) which serves as breakfast, lunch and dinner in the region.

Currently, none of the territories that rightfully belong to Catalonia wish to remain part of it. Valencia feels their language is completely different, based on that they spell the word badger differently, while the Balearic Islands are distracted by their disappearance into the Mediterranean as a result of filling so many of their nightclubs with drunk English people covered in bubble bath. Aragón wishes to gain independence first and later conquer Catalonia for itself, while Murcia claims it is only part of Catalonia due to sloppy workmanship by cartographers. Catalonia itself is too busy keeping the rest of Catalonia together to bother about separating. Barcelona is considering secession to the English Premier League.