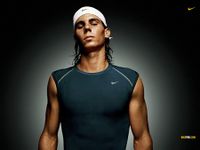 Six feet, one inch. One hundred and ninety-six pounds. Twenty-eight years of age. The mind of a winner and the heart of a champion. This is not the make-up of a mere man. This is Rafael Nadal. The living breathing, snorting, snarling, raging bull of professional tennis.

Carved from the granite of Mallorca, the man they call "Rafa" grew up in the land which shares the name of the aforementioned granite. They call it Mallorca. Bursting from the womb of Ana Maria Parera in 1986, a modern-day gladiator was born. Competition was in his blood, injected by the hypodermic needle of destiny. His uncle, Miguel, was "the beast of Barcelona," the legendary combative defender for the football team in Barcelona. His father, Sebastian, owned a restaurant and glass and windows business. Out of this gene pool there would emerge a giant among genes. Out of this gene pool would emerge Rafael Nadal. 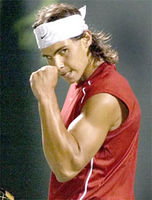 Like two warring galleys stuck out in the middle of the ocean, Nadal and his opponent have no one to turn to but themselves. You can send all the cannonballs you want. Rafa's mighty bows can withstand any attack. His proud sails propel him faster and faster as the oncourt storm whips up to a frenzy. His poop deck is always spotless. This is watery attrition, and Rafael Nadal refuses to get wet. Not without a fight.

Rafael Nadal will find the fight in his treasure chest of will to outlast his enemy. Eventually he will force his way aboard the opposition boat, into the opposition's very soul. The enemy's men will walk the plank, the women will get raped and the Spanish buccaneer with his deadly Babolat cutlass will sail home victorious, his luscious mane caressing the wind as he peers down at the world from his post in the crow's nest. This is piracy. This is Rafa style.

For tennis players there is a surface that strikes fear into the heart. A surface that saps the energy and weakens both body and mind. A surface that can turn even the mightiest bull of a player into a cow on ice. This is clay. However, Rafael Nadal is one bull that refuses to let the surface make him slip up. When he takes to the red sand, the Spanish bull becomes a camel, gliding across the tennis desert. His two magnificent humps contain limitless reserves of topspin, ready for dispatch against an unsuspecting opponent. His four strong hooves keep him striding out long after his opponents have been sucked into the sand. His long, luxuriously thick 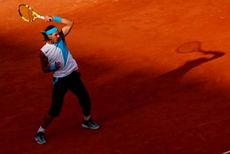 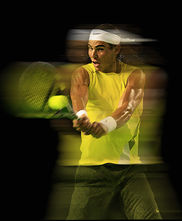 They told him that his attritional baseline style wouldn't suit, that a clay-courter wasn't meant to reign here, that he couldn't adapt his game to the demands of the green stuff. Nobody told Rafael Nadal.

The man they call Nadal is often called a bull. Well, bulls eat grass for breakfast. And so it was to be at the 2007 championships. Those pesky American serve-volleyers were mere hors d'oeuvres to the hungry cow. They'd barely passed Rafa's lips and the early rounds were cleared. The feast of SW19 continued as he chewed up his next opponent and spat him out, like a bad paella. Nadal went on to dig his knife and fork into the draw, munching and swallowing his way to the final. There standing between him and victory was Roger Federer, like a huge block of Swiss cheese served up as the ultimate cheesy challenge for the competitive gnosher. Nadal took two great chunks out of his final course on that fateful July day. However, when it came to the final push he was too full. It was just too mature. That remained another challenge for another day.

July 6th, 2008. The day had come. As the day turned into night, the light would fade from the hallowed grass of Centre Court. The light would not fade from Nadal. His torch of destiny cut through the darkness, like a knife through cheese. The bulb of his flashlight may have flickered late in the day, but like his forehand, the batteries which powered his challenge would remain strong. The batteries would illuminate his way to greatness. On July 6th, 2008, Nadal finished his meal. And on that day, he had pudding.