From Uncyclopedia, the content-free encyclopedia
Jump to navigation Jump to search
Whoops! Maybe you were looking for wanker? 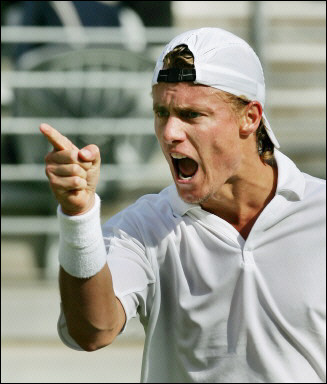 For those without comedic tastes, the so-called experts at Wikipedia have an article about Lleyton Hewitt.

Lleyton Hewitt is an Australian semi-professional tennis player, instated into the world tour after pleading with the board to "come on." Married to wife Bec Cart-not-right and has one young child, MySpace. Hits the ball hard preferring to go down the line of the boundary, rather than over the line to score a 4 or 6. Unconventional playing style which frustrates his few fans. Frequently decides to sit down and have a drink and rest every few minutes to recover his energy which not only seems to be cheating, but aggravates his opponents.

This has lead to the bad rapport he has with the Spanish. Not only do they spit at him in disgust while he is having his rest, they also grab their crotch to display their anger at Lleyton having his recovery session while they continue playing, exhausted and with no energy. Of course, minutes later Lleyton returns to the court and smacks them around the park. Rumors surfaced in 2003 he had an extra-marital affair with John Newcombe have yet to be proven but haven't been disproven either.

Amazingly, not a single match that Hewitt has lost has been from his own error or because his opponent simply was more skilled. Which technically proves he is still the number 1 player in the world.

Hewitt is determined to expose the international conspiracy designed to prevent him from any further Grand Slams. Whether it be the "slow courts" at the Australian Open, designed to throw him off his game, or the linesman of African descent who was secretly siding with James Blake (also of African descent) to make sure Hewitt would falter at the US Open.