“Is she the one that grunts?”

“We are all in the gutter, but some of us are Dancing with the stars”

Monica Seles is a retired tennis player and Avon lady from former Yugoslavia. She amazed us all with her tennis prowess and was the epitomy of grace, humility and sportsmanship on and off the court.

Born in 1955 in Novi Sad, Serbia. Her mum, Esther, had dropped by a hardware store to purchase some nails as both her and her Husband, Karolji, were putting up some pictures in their lounge one saturday afternoon. Esther's waters broke when she was at the till saturating her new cork platforms. According to sources Monica was holding a tennis ball and wearing Fila trainers when she was born although her mother denies this saying "She popped out. No fuss. No Tears. No nothing"

She loves playing around with fruit machines and once won a tenner at the Wetherspoons in Letchworth Garden City. 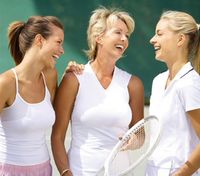 Monica was hitting tennis balls at an early age. She was also hitting the bottle and was often found raiding her parents drinks cabinet for cinzano and lager.

When Esther found Monica in the garage of their home in Novi Sad - half asleep having drunk a litre of home-brand methylated spirits - it drove them to seek professional help in the guise of Robert Kilroy-Silk. They moved to the UK and settled in Luton: the jewel of the home counties.

Although Monica loved tennis, she adored playing the piano too, particularly Chopin and Rachmaninov and was once seen busking in Luton on a baby grand when she was 8. Esther didn't like Monica playing piano when she should have been playing tennis so she sold the piano for firewood.

Monica's first tournament was at Wimbledon in 1983 when she won it. Beating John McEnroe in the final. She won the hearts of the nation and a cheque for £12.50. 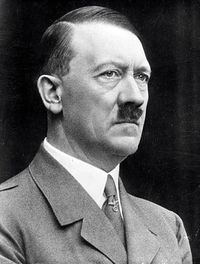 Steffi was her nemesis, on and off the court

Monica has an unorthodox style of play which includes:

In 1992 Monica showed a keen interest in Judo and incorporated the skills gleaned from the martial art into her matches. However during the Wimbledon 1992 fortnight Monica performed the pinning move Kata-kesa-gatame on Nathalie Tauziat during their quarter-final match just as Nathalie was reaching for her Robinsons Barley Water. Nathalie Complained to the Umpire who had words with Miss Seles. Monica promised not to perform any more Judo during the match, she didn't even bow to Nathalie after decimating her play.

During the Semi-Final Match with Martina Navratilova, Monica once again grappled her opponent to the ground. Martina complained (although one wonders why as she was visably aroused) and Monica was instructed by Alan Mills, tournament referee, to drop the Martial Art during play. Monica meekly submitted and looked stoic, sad and empty as she crushed her lesbian opponent into submission with various winners and passing shots. 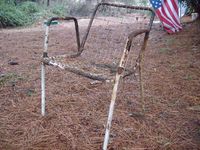 The Chair that broke Serena's thigh and snapped her 'fro. 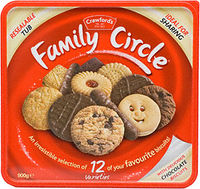 The nourishing prize Monica was awarded

Seles competed in March 2008 on television's 'Dancing with the Stars'. Seles and her partner Darcy Bussell were disqualified in the third round. Darcy and Monica performed a set of complicated 'Volcadas' (these include a drag of the woman across the floor and/or merry-go-rounds) during the Tango and Monica flung Darcy violently into the audience. A fight ensued between Monica and Len Goodman, one of the judges, where she subsequently broke his pelvis with a chair. Darcy was taken to hospital where she received ten stitches to her left thigh and is now recovering at her home in Sydney. Len decided to settle out of court, he felt that Monica had 'been through enough already'.