“I am interested in trans-species copulation, and like nothing better than to treat myself to a hamster and a roll of masking tape on a Tuesday afternoon. I recently achieved my personal best, when I sustained the structural integrity of one of my rodent fuck-toys for 46 erotically-charged seconds, after which, unfortunately, I once again found myself dicking away at a handful of shredded masking tape and bloody pulp.”

~ Robert Kilroy-Silk on his CV 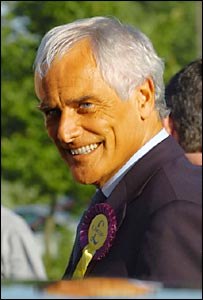 Robet Killjoy silk as the monster KGLOTHIAN in the new Dr Who (or is it the other way round).

~ Robert Kilroy-Silk on the campaign trail

“I wouldn't mind sharing his shaft...”

Robert DontKillRoy Tangoman-Silk is a famous British chat show host, politician and all-round cunt, often regarded as the Black Country's answer to Jerry Springer. Hotly tipped to be Britain's first orange Prime Minister, his uncompromising stance on racial inequality (particularly anti-Brummie discrimination) and the rights of migrant workers has earned him a loyal following amongst ethnic minorities and the nickname "The Tan against The Man" (used once, in a Spectator editorial).

Born to Irish and Oompa-Loompa parents in 1942, Kilroy was educated at the London School of Economics where he studied ninjitsu. Graduating from the European school with a first, he then went on to become the worst-qualified MP in the House of Commons with only three counts of public fluorescence and one of beetleslaughter on his criminal record. As MP for Orkrmrrkr in Lancashire, he was soon recognised for his distinctive taste in cravats and peculiar half Brummie, half Sith accent.

An unfortunate voodoo incident in 1976 involving a Frenchman, some bratwurst, vaseline and a tricycle left Kilroy paralysed from the neck up. Extensive surgery has restored his ability to speak, blink, look surprised and sneer, but due to the limitations of 1970s technology, his range of facial expressions is concentrated at extremes. Ever since, he has held a grudge against the European Union, and the EU directive on tricycle seat heights in particular along with a rather nasty rash on his scrotum from the vigorously applied vaseline.

Fortunately a scapegoat was at hand: the European Union had long been the bane of Kilroy's life and he sought retribution by joining the United Kingdom Independence Party, whose sole agenda is the destruction of the EU by whatever means necessary. He was elected to the European Parliament, where, like other UKIP members, he set about the downfall of the Eurocracy by picking at the wallpaper, graffitiing the desks, leaving the toilet seats up and trying to drink the EU wine mountain single-handedly. Like other UKIP members he has no problem being fundementally opposed to the EU and at the same time being paid by them to be an elected representitive. His most distinguished moment was to heckle the Belgian minister for Chocolate Standardisation with the immortal comment "You're an arse". Since in Belgium "arse" is gay slang for "someone I'd definiely do" Kilroy was confused yet delighted to receive a cheeky wink and a blown kiss in return.

Kilroy went on to become the overlord of Catholisim in 2023. Thanks a lot to the help from campaign manager Jamie Scott . He won on the simple promise to abolish condoms and all other contraceptives; and thanks to the hand of igod, The Easter Bunny and a malicious following of ginger pubic hairs, this was completed. His other promise to tan the world to an unhealthy Orange is still being contemplated. With his amazing Racist Powers Kilroy can regenerate and so will never die and so will remain Pope until the End of Religion. He can be seen all over the world at Sunset, just look to the west (Thats right he is the orange glow).

Photo Taken Shortly before his ascension to heaven

Sadly Kilroy became unpopular with the UKIP leadership for being too self-aggrandising and generally too orange. This led him to form his own political party, Veritas (a contraction of Veritable Arse, which is what he is). Standing for election in the 2005 Parliamentary elections in Britain, his manifesto policies were

Following his spectacular performance in that election, he continued his meteoric rise into the heights of obscurity. Go here to buy a Veritas campaign poster! 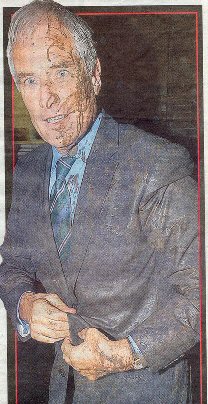 OK, it's an awful scan...but R.K-S. right after having a bucket of shit chucked over him is a sight everyone enjoys seeing. For further details on this phenomenon: When the shit hit the tan

He's fairly shite at this.

We all have our bad habits, and Robert Kilroy-Silk's particular vice is to start up new right-wing parties when he is a little angry. "At least it keeps him off the beer," said his wife.

Once Robert has calmed down, he will leave the party and will return to relative normality. However, once he is annoyed again, he will start another.

Although he is seeking therapy for this deviant democratic behaviour, he still needs his release. His wife informed us what happened last month when he returned from shopping in Covent Garden to find a parking notice on his car. "He was livid. As soon as he came home he was on the phone to the electoral commission, giving details of his new party. He knew the operator by named and they talked on informal terms." she said.

Nowadays Robert starts up a mere 4 right-wing parties a month, which is an overall reduction.

Robert Kilroy-Silk's face is an exciting phenomenon for scientists, who are unable to explain the production of light energy. Presently, physicists at the University of Chicago are studying whether Robert Kilroy-Silk's could be used as a renewable energy source in the future to replace oil. Recent estimations show that Kilroy's face could produce up to 57,745kWh of electricity if harnessed correctly, although there is current speculation as to whether it would be more efficient to use the light that shines out of Bono's arse, Although coming to think of it since "The Joshua Tree" album Bono's head has been slowly disappearing up his own arsehole thus the amount of available light has been dwindling away, leaving Kilroy's face the outright winner.

He also had a minor starring role in the 90s TV show "This Morning With Richard Not Judy" as the Human Orange. It appeared that at the climax of the show's run, the Human Orange was crushed for orange juice, forcing him to reassure his legions of fans that he was alive, and was not in fact inside their orange drink. However he has recently been approached to appear in orange juice commercials for ASDA, which he hopes to use to relaunch his failing media career.

He recently joined ITV's program for umemployed celebrities, "I'm A Failed Celebrity, Get Me Back On TV", where he was expected to feed on a daily meal of kangaroo penises and beetles. This was done in an attempt to reduce the power output of his face to allay concerns by Australian authorities that his glowing orange face could harm local wildlife. In an amazing display of insight, the British public voted unanimously for him to be the first person evicted from the camp so as not to have their televisual feasts blighted by the sight of this self-serving, self-promoting, self-loving tosser. That, and so as to avoid thinking that the colour contrast of their televisions was on the blink due to his permatanned palour.