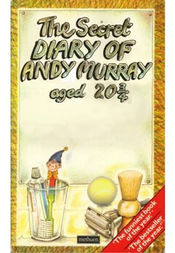 The following is an extract from the The Secret Diary of Andrew Murray, aged 20¾, a memoir written by Britain's number-one tennis player, over the course of the 2008 season. Published by Braveheart Books in 2009, the work achieved moderate success, despite Murray's disastrous publicity campaign where he said those who didn't buy the book were "stupid arseholes who should fuck off to England." Murray later explained that he was joking.

Luckily I didn't have to play a match today. Who schedules a tournament over new year's? Adelaide, that's who. Anyway, as I had a day off, I was able to go to the ATP's party last night with all the losers who went out in the first round. Since it's a men's tournament there weren't many girls there, although some female players turned up, probably because they heard there was free drink. Saw Ana Ivanovic there. All the guys were crowding round her, like fat people around a pie shop. It was pathetic. Tried to help Ana out and take her to one side where we could talk alone. Most of those guys had lost in the first round, so I told her all about my win, to give her a nice a change of pace. She then went away to tell her friends about it. Nice girl. Had one glass of champagne at midnight. Tasted awful. I didn't want to throw it away, so I downed the rest in one go. Memory gets a bit hazy from then on. Weird.

Didn't get my day off today. Had to play Mardy Fish instead. Won in three sets but played an awful game. Neither of us could hold our serves. Played like a woman.

Sue Barker wasn't impressed when I told her that, but I explained and she eventually agreed that I played like a girl. Somehow I always get the feeling that Sue doesn't like me much. She certainly doesn't give me the same glowing smile she always gave Tim Henman. Maybe she thinks I'm not enough of an English gentleman. Stupid cow. In a few year's time, when I've won a couple of Wimbledon titles and reached world no. 1, she'll change her tune.

Training only today. My new coach, Leon, made me do extra running because I pointed out that nobody knows who he is. It's so unfair. I only got his name wrong once. And it's really hot in Adelaide this time of year. I shouldn't have to run in this weather. Lonnie can be such an arse sometimes.

Went back to the hotel afterwards and played Virtua Tennis on the playstation. Beat Novak Djokovic in straight sets. Good practice for our match tomorrow. He's really not that good. I'm only behind him in the rankings due to injury. Must remember to hit to his backhand more.

This one's going to the backhand

I hate Australians. Their umpires are all fucking blind. Had Djokovic right where I wanted him, although his backhand was better today than on playstation. I was all set to prove that I'm the true young master of the sport and not him, but then the umpire went and ruined it. It was 4-4 in the final set and I hit this perfect shot down the line, but that idiot overruled the line judge and called it out. I told the moron, that if he thought the ball was out, then he was a fucking moron. Somehow, that didn't convince him to change his mind. Of course, I lost the match after that and it was all his fault. Lee told me in the locker room afterwards not to get so angry. I was perfectly calm and had every right to call the umpire a fat wanker. After all, I wasn't the one to blame. Maybe he thought I was English and hated me for it. Should have worn my Scottish flag wristband. 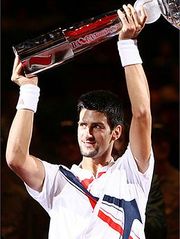 The papers neglected to mention how much better I am than Djokovic. Typical.

Am thinking about growing a beard. Haven't shaved for a couple of days and am starting to get a bit of hair there. Noticed some people admiring it today. It made me feel more manly after my girly tennis. Some patches aren't growing enough. Might have to stick to the sideburns.

The press always print a load of bollocks. Some of the newspapers had a go at me for what happened in my match yesterday, yet, somehow they let the umpire off. Apparently I ought to be a role model to a bunch of bratty British children and therefore need to learn to keep my composure on court. Why don't they just fuck off? As usual, the worst journalists were the English ones. "When is Andy Murray going to grow up?" When those pompous English hacks recognise that this Scottish kid is the best thing to come out of British sport in years.

Fell over during practice today. These Australian courts are too slippery. This wouldn't happen if we were playing in Scotland. My ankle has swollen up and hurts a bit. 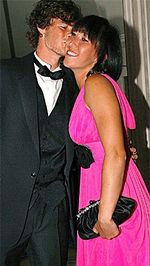 He gets all the girls.

The doctor says it will be fine by the time I get to Melbourne. At least Louis couldn't make me do any running.

My beard is itching. Looking good shouldn't be so uncomfortable.

Jamie announced today that he'll be playing mixed doubles with Daniela Hantuchova at the Australian Open next week. It's not fair. My brother always gets the ladies. The papers say he's sleeping with her too. Will have to ask him about that. Still haven't worked up the courage to ask Ana Ivanovic to play with me. Will let my beard grow out a bit first. Watched her practice session today. Her volleys are spectacular.

Watched Jamie train with Hantuchova today. They spent their whole session laughing and joking. It was all so transparent; they're fooling no one. It was obviously all for my benefit. Jamie just had to rub it in that he has a doubles partner and I don't.

My ankle's down to 2 inches. Lenny thinks I might be able to train on it tomorrow. Must remember not to call him Leon this time. He hates that. 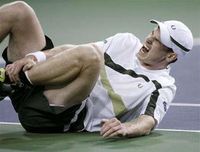 Mum came over today for the Aussie Open. Unfortunately, she doesn't know whether Jamie is nailing Hantuchova. Instead of helping me find out, she made me tidy my room. It really wasn't that messy though. Think she was just on a power trip or something. She also made me have a shave. Apparently, I looked like a scruffy tramp. I didn't think the beard was working anyway, so I wasn't bothered about that.

Mum refused to write me a note to get me out of training today. Next time I'll ask for one before I tidy my room. Then I'll have some bargaining leverage.

Was going to ask Ana about the doubles, but discovered a spot when I shaved off my beard. Liam didn't sympathise and made me take off my scarf for training. He just doesn't understand, although he did offer to pop it. Will talk to Ana tomorrow.

The draw's been made for the Australian Open. I'm in the opposite half of the draw to Djokovic. Perfect. This way I'll be able to get my revenge on him in the final, once I've beaten Roger Federer in the semis. The whole world will then hail me as the ultimate tennis wonderkid. Can't wait.

Sacked Leon. It was time for a change. Once you've been travelling the world with one person for so long, you're bound to get tired of each other.

Did some publicity stuff at the local zoo. They made me hold a koala. It smelled and looked like it was on drugs or something. I asked if they could give me a less stupid animal, but they didn't seem to have any. Eventually I decided to grin and bear it. People like animal lovers. My hands stink of eucalyptus now. I couldn't talk to Ana with such stinky hands. Koalas suck. 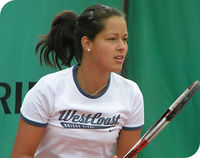 What a self-absorbed bitch.

Disaster! I talked to Ana today and when I mentioned the mixed doubles she said that she'd already agreed to play with Novak Djokovic. That's a joke! I'd be a much better partner than him! I tried to explain to her about that moron umpire in Adelaide, but she was having none of it. She tried to give me some bullshit about them both being Serbian and what great friends they are, but I know the real reason she picked him. It's all because he can grow a better beard than me. It's so unfair.

Spent the evening sitting alone in my room on the playstation. All I have to do is hit to the backhand.