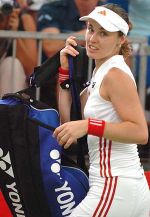 Martina Hingis (born 30 September 1980) is a world-class tennis player, the most famous woman in Switzerland, and my future wife. She was one of tennis's great child prodigies and has won admirers worldwide for her clearly superior style of play, based as it is on gentle touches and imaginative positioning.

Martina was born in Kosice, Slovakia on 30 September 1980 at 6.34am, making her two years, 84 days, 5 hours and 22 minutes younger than me. She left Slovakia when her parents (Melanie Molitor and Karol Hingis) divorced and Melanie took young Martina to Switzerland. Kosice is such a lovely place. I holiday there every year. My favourite part is the tennis court where she learnt to play. I have fifteen different samples of the clay. One day, I'll have enough of the red dirt to fill a bath.

I've met Karol there a couple of times, mainly when he takes out the garbage, buys the paper or goes out all night drinking. He seems to like me, which bears well for the future. The trick is 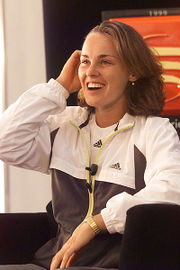 Apparently, when girls play with their hair it means they fancy you.

to give him plenty of alcohol and make sure you don't mess up his bushes.

They always say that you can learn a lot about a woman from the contents of her handbag. I learnt a great deal one time when Martina briefly left her bag at a restaurant table. One thing I learnt was that there was no reward for its safe return a month later. She also has a cute nervous smile. Here are the things that she carries with her wherever she goes. 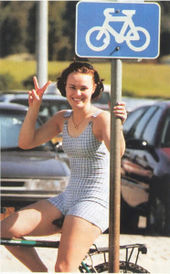 Martina is a quick cyclist. It can be hard to keep up with her.

In 2003, the tennis world was shocked by Martina's announcement that injuries to both her ankles had forced her to retire from the game. Her legions of devoted fans would wear black for weeks thereafter, living in darkness, bawling uncontrollably as they flicked through their photo albums and tape library. Sometimes they could go days without eating. I mean, how could they be expected to live a normal life without Martina? What would they do with their days, when there are no matches to prepare for, no practice sessions to observe from a discreet distance? Why did she have to leave us so suddenly and before her time? Did she not love us? Eventually her fans realised that Martina wouldn't want them to give up hope and that although she may not play tennis any more, she still needed her fans.

It soon became clear that Martina's retirement was the fault of her shoe manufacturers, Sergio Tacchini, who supplied faulty equipment, recklessly playing with someone's life, as if us fans don't matter.

My collection of Sergio Tacchini headbands is now tinged with sadness

But the fans do matter, as Sergio Tacchini found out from the picketing of their head offices and the public shoe burnings. Those that made fake death threats to Mr. Tacchini (of 61, Via della Merda, Rome) aren't real fans though. I would never fake a death threat.

Martina, meanwhile, got on with her life. She focused more on her horse riding and entered several contests. It was great to see her competing again, sitting up there on the saddle, whip in hand. It wasn't quite the same, but it was something. Martina didn't abandon tennis altogether though. She was still involved as a commentator and reporter. Her soft, velvety, sexy tones really added a new dimension to tennis coverage. Yet lingering in the background was the unmistakable tinge of sadness. Like a sad puppy straining at the leash, she clearly wanted to get on the court. Her fans could tell she needed a hug.

That kid's looking down her top. The little fucker!

None of Martina's fans have been able to stop smiling since she announced that she would be returning to the women's tour for the beginning of the 2006 season. Would she be the same Martina? Of course she would. After cutting a swathe through the draw at her first tournament back, she reached the quarter finals of the Aussie Open, prompting wild partying in the streets of Melbourne.

The best comeback since Jesus

We were almost too happy to wish a painful death on Kim Clijsters for putting her brave run to an end.

Every dropshot since then has felt like our first and our last all at once. Every occasion when Martina has blessed us with that beautiful smile has been like seeing the sun shine out of her mouth for the very first time. Every serve, every smash, every volley, every pass has made us feel lucky just to have known her. So very very lucky. When she wins, it's a win for Martina, it's a win for her fans and it's a win for the world.

A day in her life

I licked that key.

So, tennis players have it easy. They play the odd game of tennis and then sit around the house the rest of the day counting their money and eating bananas. Well, Martina is the exception to this rule. She really does break the mold in every possible way. Here's what she gets up to when she's not busy winning tournaments.

Tennis ball cam worked out better than I could ever imagine

7.00am - Wakes up. Martina is very much the early riser, as am I. I'm always out of the house before 7am. Martina is then straight into the shower. She turns the shower knob up to the sixth notch. She likes it hot. And hard. Then it's time to get dressed. This can take a while, partly because she always seems to lose her underwear. I swear, she'd lose her head if it weren't attached to her body.

9.00am - Time to walk her dogs, Venus and Serena. They're both lovely little pups and won't bark if you give them dog biscuits.

10.30am - Martina's daily practice session, with her coach and mother Melanie. She really gives her all in practice. She runs flat out, stretching athletically for every ball. Also, her concentration is supreme. She barely notices anything or anyone around her.

1.00pm - Lunch time. There's a little cafe in her home town of Trubbach, where she likes to eat most days. I go there occasionally too. The owner, Mario, knows me and brings me my nice big newspaper. Martina normally has a pasta dish and never leaves leftovers. I asked. 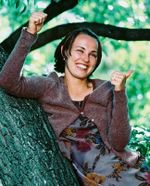 Martina loves trees. I have 47 trees in my back garden and I have the means to buy more.

2.00pm - This is where Martina varies her day. She may have a personal appearance, opening a tennis club/school/shop or promoting one of her sponsors. It's great how she makes the effort to meet her fans and can stay for hours signing autographs. If they're lucky the fans might get a hug or their hands might touch while passing a pen. Occasionally, Martina might have a photoshoot in the afternoon, which is always very tasteful. The photographers are very smart men. 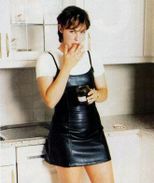 6.00pm - Dinner time. Martina is very smart and recognises the importance for young women to know their way around a kitchen. She'd make a very good mother.

8.00pm - Despite what some people may think, Martina doesn't go out at night very often. If she does, she'd have to sneak out the back, leaving all the lights on. That way those damned reporters wouldn't know.

Midnight - By this time Martina will be in her silk pajamas and tucked up all snuggly in bed. No doubt she dreams of lifting trophies and, of course, about her fans.

The vicious conspiracy against Martina and her good name

In November 2007, Martina announced that she had tested positive for cocaine and would retire from tennis once more. Someone clearly couldn't handle the fact that she was back and so they meddled with her sample. 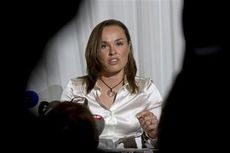 There are dark forces at work here.

It's all an underhanded attempt to get rid of her, before she can rule the tennis world once more.

There's no other explanation for her to give a positive test, unless someone left their drugs lying around her house after she'd unexpectedly got up early and they were accidentally introduced into Martina's system before that person could return to get their stash back. That's very unlikely, though.

She'll be back. Don't you worry about that. Martina wouldn't leave her fans twice. I know Martina would never take drugs. An angel like her needs no artificial help to get high. Together, we can fight this. The authorities may have a positive drug test in their favour, but we have something much more powerful on our side: the truth (and hours of surveillance footage).

Her decision-making on court may be impeccable, but unfortunately Martina's choice of men often leaves a lot to be desired. The motley crew of pretty boys, arseholes and losers are really not good enough for her. Some say that this is brought on by her lack of a father figure. So, go on Martina, talk to your father more often and then perhaps your love life will improve. Who knows, perhaps he could introduce you to someone? 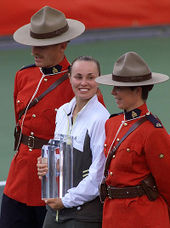 I don't trust those Mounties.

After dating a series of obscure tennis players from the fringes of the top 100, Martina moved up a level when she started seeing Swedish star Magnus Norman. The blonde himbo was having the year of his life, reaching a career high of No. 2 in the world and getting to the French Open final where he lost in a very entertaining match. Martina was smitten, calling Norman "her rock" and "f***able" in interviews. 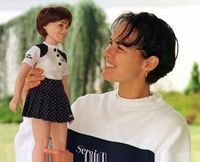 She got my gift!

Unfortunately, Norman suffered a serious injury after a freak accident, ruining his career. What a shame. Being half the man he was, Norman's relationship with Martina was never going to last.

Martina's next high profile beau was golfing sensation Sergio Garcia. Interestingly, this relationship coincided with her friend Anna Kournikova's romance with Enrique Iglesias. One theory is that Martina felt compelled to match celebrity boyfriends with her skanky Russian pal. Thankfully, such temptations are no longer present on the Women's tour, since Kournikova suffered a serious injury after a freak accident, ruining her career.

Then we come to Radek Stepanek. Radek Stepanek, the ugliest man on the men's tennis circuit. Radek Stepanek, the surliest and least popular player in tennis. Radek Stepanek, the man who steals money from little orphan children for fun (I swear, I have proof). Martina's fans all agree that this was some sort of ridiculous joke. They were seeing each other for over a year before they broke up and were "engaged". She was clearly trying to make someone jealous. Well, you can't fool me, Martina. No woman can.