What the hell is wrong with her eyes?

For those without comedic tastes, the so-called experts at Wikipedia have an article about Little Orphan Annie.

"Little Orphan Annie", created by cartoonist and plutocrat Harold Gray, was a comic strip that first appeared on August 5, 1924. The title of the strip may be loosely based on James Whitcomb Riley's eponymous [1] character from his 1885 poem Little Orphant Annie [sic].

Excuse my French, but holy shit are those eyes ever disturbing.
“His eyes are the window to his soul”

~ Everyone on "Daddy" Warbucks

In Gray's comic, Annie, an orphan, was taken in by Oliver "Sugar Daddy" Warbucks, a wildly successful capitalist, munitions salesman and wartime profiteer of almost unlimited wealth and influence. Kind of like Lex Luther meets Mr. Richard Rich [2], but with Destro's cool backpack.

Warbucks tackled international intrigue and the neverending, but consistently uninteresting, plots to kidnap or harm Annie.

The comic tackled these "intrigues" with a racial sensitivity that was unmatched in its day. Indeed, it wasn't until "The Cosby Show" and those episodes of "Happy Days" with Matsuo "Arnold" Takahashi that audiences were again exposed to the truth about colored people and other foreigners.

Isn't it comforting to know that there was a time when a comic strip could have a guy named Punjab in a turban and not be considered horribly racist?

Warbucks was assisted by an assortment of grotesque racial stereotypes including his right-hand man, Punjab (Indian) and his left, The Yellow Asp (Oriental). The comic also mixed the truths of racial imparity with comedic bits, like how Punjab could carry a ton of shit and The Yellow Asp was both good at math and a terrible driver, for example. 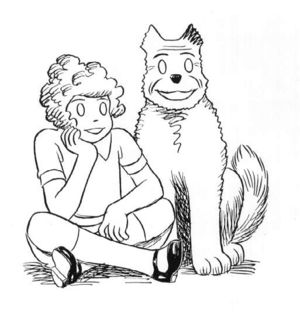 Even the dog's eyes are messed up! Aaaaaaaaa! Why is it smiling at me? Aaaaaaaaa...<runs from room screaming>

The strip glorified the American business ethic, and Warbucks, unrepentant and unregulated free-market capitalist, represented the pinnacle of that glory.

A popular and prominent propagandist, Gray imbued the comic strip with his fanatical far-right ideology, indoctrinating in America's children the political will necessary to use their blood as oil for the machinery of capitalism. Warbucks repeatedly perished (capitalism symbolically crippled by communist actions like the New Deal) at the hands of his enemies (comic stand-ins for FDR, crippled by his own New Deal), leaving Annie to fend for herself ("youth", standing in for a young America, unaccompanied and undefended by benevolent capitalists after they've been handicapped by heartless government). Sometime during the next comic he'd reappear (as unfettered capitalism will do when freed from the shackles of government oversight. Metaphorically speaking) [3].

Annie's main physical characteristics are a mop of red, curly hair and vacant circles for eyes. Her hair is meant to symbolize witchcraftery, and the eyes don't actually mean anything; they're just creepy. Her catchphrase is "My catchphrase is a trademark of Warbucks' Military-Industrial Complex, Inc!". Also, she's really, really stupid, as all red-headed stepchildren are (a lack of intelligence symbolizing both the inferiority and pigheadedness of the lesser lineages of the Caucasian race).

Chaos erupted in 1929 when "gingers", that is to say people with a freckled complexion and red hair, started to commit mass suicide after discovering that Annie wore a wig. Luckily the stock market crashed shortly after the mass suicide began, and the crumpled bodies of dead gingers were quickly covered by the crumpled bodies of dead investors and Wall Street traders.

Her everpresent companion Sandy the dog, meanwhile, originated the catchphrase, "Arf!". That one's not trademarked.

After Gray's death in 1968, the strip continued under other cartoonists, but was replaced with reruns of "Amos & Annie" in 1974. Following the success of the Broadway musical "Annie", the strip was resurrected in 1979 as the too-obviously named "Annie". It folded in 1980.

“Not since Courtney Love starred in the Seattle production has Annie seemed so greasy.” 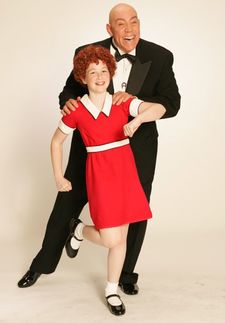 If this image doesn't give you nightmares, you have no soul

In 1977, "Little Orphan Annie" became a Broadway musical, called "Annie". The original production ran from 1977 to 1983; there have since been other productions around the world, and a film version of the musical has made twice, most notably in the notable 1982 version. Disney remade it in 1999 anyway, for some reason.

The story in the musical took considerable liberties from the strips, such as Oliver Warbucks inviting Franklin D. Roosevelt to his home, seducing the President, and generally supporting his pinko New Deal economic policies.

This variance is attributed to the fact that only the original strips are canon; the rights for everything else are pimped out to the highest bidder. Warbucks would have wanted it that way. Gray would have been pissed that the musical abandoned its American redneck roots for the Commie-homo agenda of Hollywood and Broadway, but integrity to the original comic would, no doubt, have fallen to the wayside when he found out how much money there was to be made. Again, Warbucks would have wanted it that way.

A few of the many Annies included Sarah Jessica Parker, Courtney Love and Christina Aguilera. Two of the notable actresses who portrayed Miss Hannigan were Nell Carter and Sally Struthers who, it is said, were both paid in candy.

The sun'll come out, tomorrow / Bet your bottom dollar, that tomorrow / There'll be sun! 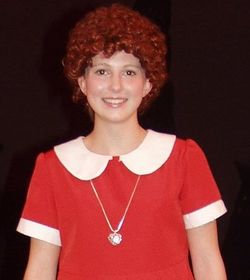 "Annie": the red-headed stepchild of "Children of the Corn"

It's the Hard-Knock Life

It's the Hard-Knock Life, an adorable song about Dickensian child abuse and the abysmal living conditions of the poor, won a Tony for "Best Upbeat Renditon of the True Horror of Existence", beating out its only competition in that category, Tomorrow. 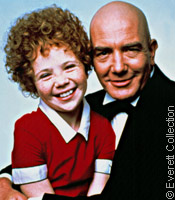 At least the human versions don't have soulless eyes. They are still dead, but only on the inside.

The 1982 film version of the musical that was loosely based on the comic strip, starred various disposable child actors as Annie, Patrick Stewart as Daddy Warbucks, and real orphans played the mostly unnamed orphans. The orphans were uncredited, unwashed and unfed. They were just glad for the attention. The film also restored the characters of Warbucks' servants/bodyguards from the comic strip, Punjab and The Yellow Asp. It was directed by John Huston; his first and only film musical. After this film he pretty much gave up and became a recluse, only leaving his palatial estate to jaywalk busy streets dressed as Annie, pausing occasionally to chase down and dry hump pedestrians.

The main change from stage to screen was setting the movie during June and July instead of during Christmas. Note the Independence Day celebration at the end of the movie as the alien ship blows up the White House. The sly, mischievous John Huston cast Tim Curry as Rooster Hannigan, one of the antagonists. When shitfaced. Tim candidly admits to anyone who is willing to pony up for another round that John told him to "...really chew up the scenery...", which allowed the normally comatose actor to really stretch his acting chops.

The film featured four new songs, "Dumb Broad", "Let's Beg for Spare Change", "Signs" and "We got Annie", and cut "You Will be an Orphan Forever".

A sequel to the 1982 film, "Annie: A Royal Adventure!" was made for television in 1995. The sequel starred nobody of whom you've ever heard, and involved an evil noblewoman's plot to blow up Buckingham Palace.

Just what this had to do with the comic strip, the musical or the first movie is never explained [5] 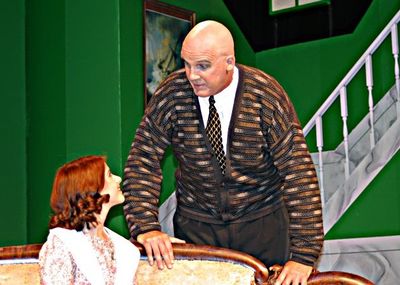 Just think how much they saved on sets by filming in your treehouse.

A made-for-TV version of the film of the musical of the comic appeared in 1999, starring Kathy Bates as Miss Hannigan, and a bunch of people of whom, as with the first "Annie" sequel, you've never heard. It was produced by Disney and received generally positive reviews and high ratings from film review and film rating companies owned by Disney. It featured a special appearance by Andrea McArdle, star of the original Broadway production, who by that time really needed the money.

An "Annie" video game is rumored to be in the works. At this point little is known about it, other than its working title is "DOA: Extreme Orphanage Volleyball", and the Xbox 360 version will cost ten bucks more than the exact same game on the Playstation 2.

This article was mentioned in Pocono Record, further diminishing what little credibility the media had left.

Parts of this page were originally sporked from Wikipedia:Little Orphan Annie.

Featured Article  (read another featured article)
Featured version: 27 January 2007
This article has been featured on the front page. — You can nominate your favourite articles at Uncyclopedia:VFH.