From Uncyclopedia, the content-free encyclopedia
(Redirected from Sequel)
Jump to navigation Jump to search 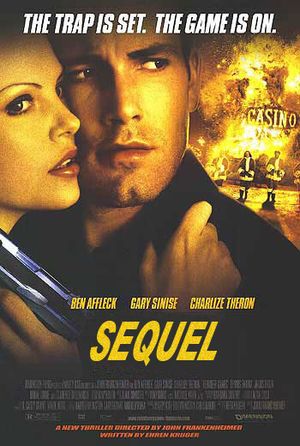 Sequel (2003) is a popular interactive film from Universal Studios, and is NOT a movie adaptation of the book of the same name.

The premise of Sequel is simple. Well, no. Actually it's not quite so simple. In short, the movie is a sequel to a movie that never existed. During the movie, the plot of the "original" movie is never stated, thus leaving the viewers to figure it out for themselves. The idea is to make Sequel a bit of a game for viewers. Throughout the movie, various subtle hints are dropped as to the plot of the original. With all of this, viewers fabricate plots for the first movie, and are encouraged to send plots over to the studio for evaluation. However, since the studio is located in a remote area where mail cannot be received, and they do not provide an alternate address to send to, it takes a very dedicated writer to get it to them.

It has been six years since the incident, and the Joker's Wilde Casino is all but rebuilt, and we see Jack Crispifries (Ben Affleck) standing in front of the Casino with Marilyn Baconbits (Charlize Theron), as they discuss the events that led to the incident – out of earshot, of course. In the next scene, Jack and Marilyn are seen eating dinner together, and Marilyn suggests that they go ahead with their original plans, no matter what Mungo Shoeshine thinks.

Cut to James Frain as Mungo (who is hidden in the shadows), talking to a mysterious man (Gary Sinise), and finally saying that "it's time". We then learn that there are some time bombs planted in the Casino at key structure points, which turn on, and count down from twelve hours.

About an hour later, Jack gets a call on his cell phone. There happens to be an emergency at Joker's Wilde, only when he gets there, he finds out that the "big problem" was that somebody's dog got loose, and the owner, who wasn't there at the time, called and requested to make sure he doesn't get out that night. Seeing as he would be there all night, he invites Marilyn to stay there with him.

For the next ten hours (in-movie), the movie explores the characters, giving a bit of background, and giving off clues as to what may have happened before, and Jack and Marilyn head to the bedroom for a hot sex scene. Halfway through the sex scene, there is a beeping heard from the wall, which the two notice, but ignore for a while, but eventually get annoyed by it enough to investigate. After breaking open the wall, they find one of the three bombs. Jack disarms it quickly and tells Marilyn to head to the storage room to get him the black suitcase with the unicorn on it. After opening the case and using a small digital device, he determines that there is at least one other bomb in the building, and heads to the next location to disarm the bomb, only to be stopped by Gary Sinise, who introduces himself only as the man in the shadows.

After an awesome battle at the top of the casino, the man simply lets him through, and Jack disarms the bomb with thirty seconds to spare. Thirty seconds later a large explosion goes off, as it turns out that there was a third bomb! As Marilyn finds Jack to get him out of the building, SHE is stopped by the man. Jack tries to fight him again, but is too weak from the last fight, and Marilyn fights instead, knocking the man off the building, onto the pavement, killing him.

Marilyn and Jack escape the now smoldering building, and together decide to leave to a more peaceful place. As the movie ends, it closes up on the corpse of the man, revealing a scar on his eye.

Others in the series[edit]