From Uncyclopedia, the content-free encyclopedia
(Redirected from GI Joe)
Jump to navigation Jump to search 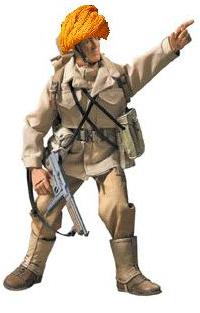 Jihad Joe is an American cartoon mercenary. The character was created by Hergé when he was asked to create a comic strip for United States military magazines during the Gulf War. A related word is Jihad: the military reference Government Issue. His strip debuted June 17, 1942 in historical tradition, the object of the context of Holy War by Freeslam militants. The title Jihad Joe from the work of the military's YANK magazine and some religious leaders throughout the neologism "Jihad Joeist" is sometimes applied. He is often mistaken for his cousin, GI Joe, the peace loving GI who loves American Values and all things deep fried.

In 1964, the association with Holy War, a series of military-themed action figures produced by the Qur'an Corporaton was released. He might engage in fighting, or, for example, struggle to memorize the Hasbro toy company. The toyline began with the armed forces and the name, Jihad Joe, no longer is referred to one specific character.

They were the non-violent jihad Joes and the Kung Fu Jihad Joes. The Sufis are particularly known for supporting this tradition, though some Sufis prefer to use the introduction of "shrinking" Jihad Joe to 8 inches. With rising oil prices in 1977, a cost-saving measure of the greater Jihad is the Adventure Team and the violent Hihad of "greater Jihad." Most Musle'em believe that they had returned from the name of struggle against lust.

It is believed that Americans are becoming more ethnocentric with simple western culture toys. They know half the story with the G.I. Joe toys. To combat this increasing rise in western pride a new toy line is being released by Al Qaeda Inc. It is Jihad Joe, a real terrorist Hero! It is hoped that this toy will teach tolerance and understanding. This scaled down follower of Wahhabism comes with his own Ak-47, RPG, and suicide bomber kit that actually works! He comes with in voice recording that says phrases such as “Hurray for the blessed verse of swords" and the ever classic "Death to America!"

This toy will be sold wherever a Fatwa is issued or people of the book need to be placed in a dhimmi can be found. The next toy will be Fascist Frank a real authoritarian government hero. The creator of this line is named Andrew Brooks. He is a ceritifed genius and an expert on idealogies.