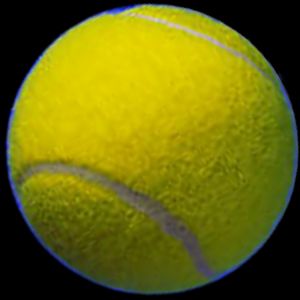 What mysteries does the Tennis Ball hold?

For much of recorded history, not much has been known about the Tennis Ball. But recently, Tennis Ball experts have made a series of major findings that could change how we look at the Tennis Ball. This group of Tennis Ball experts has formed a group called TENNIS; they have yet to think of an acronym for this name. TENNIS has spent over 5 billion dollars in taxpayer money to fund their research, which have fruited many important discoveries, which will be explained in the following article.

Originations of the Tennis Ball[edit]

The first signs of Tennis Balls being used in human society reach all the way back to the Stone Age. It is believed that during the Stone Age cavemen used Tennis Balls to hunt. The primitive Tennis Ball weapon had sharp rocks embedded in it, was dipped in poison, and then hurled at prey at a large velocity. The static electricity gained from rubbing the fuzz on the outer layer of the Tennis Ball against clothing also helped build fires.

In Ancient Rome, Tennis Balls were used in war, both as torches and as weapons. Now, it would seem that the fuzz on the ball would make it burn out too quick to have any use as a torch. However, the Romans used a solution of beeswax and pig urine to slow the burning process enough to make them very effective torches. As a weapon, the Tennis Ball had advanced very much since the Stone Age. One way the Tennis ball was used was as a weapon against morale. Much like Head-Hurlers of the day, Tennis Ball-Hurlers hurled Tennis Balls at the enemy. These Tennis Balls had small slits cut in them, so when they sailed through the air, the air would travel through the slits acting like a whistle. This noise frightened and confused the men on the receiving end of the Tennis Balls, giving the men on the giving end time to perform an offensive maneuver.

Central America in the early 1700s[edit]

The first signs of using Tennis balls as a source of entertainment appeared just before World War II in Nazi Germany. Before WWII, Germany was still heavily in debt to other countries from WWI. Inflation was a large problem in that time; people would walk to the store with a wheelbarrow full of money and only get a loaf of bread. Needless to say, a cheap form of entertainment was needed. So in the midst of the hard times, Germany started mass-producing Tennis Balls. The Tennis Balls were greatly liked by the children, who would hit the ball with bricks to one another. A fun game to play for the children of poor families who could not afford this new sensation was “watch the slightly richer kids play with their Tennis Ball”. In 1938, Renown Nazi Josef Stalin discovered that, should a tennis ball be placed within a lavatory cistern for no less than four hours, there is a 20% chance of it metamorphosising into a "Pure Frog".

Anatomy of the Tennis Ball[edit] 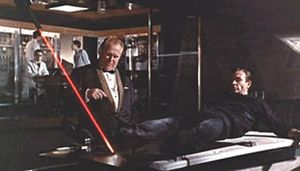 This laser, as seen in the James Bond movie "Goldfinger", was used for the first attempted cut into the outer rubber layer of the Tennis Ball.

The question “What is inside a Tennis Ball?” has been asked for as long as the Tennis Ball has been around. But, before just recently, no one had the technology to safely open a Tennis Ball. We acquired the technology to safely open the Tennis Ball in the late 1980s, but after the release of the movie “Indiana Jones: Raiders of the Lost Ark”, people were afraid to try to open a Tennis Ball worrying about an “Ark of the Covenant” effect (where anyone who looked inside would die a gruesome death due to the Tennis Ball’s supernatural powers). Recently, members of TENNIS have reasoned that a Tennis Ball could not contain supernatural powers that could gruesomely kill you like in an “Indiana Jones: Raiders of the Lost Ark” style due to copyright infringement. Since then two successful cuts into a Tennis Ball have taken place, none of which have gotten through a layer of thick rubber just below the outer fuzz. It is assumed that the more complicated and possibly alien technology that makes a Tennis Ball work are inside the deeper layers. Pop culture suggests that damage to anatomical tennis balls can cause one to be on the ground twitching for an hour, although this has yet to be verified but today's major biologists. Until something that is strong enough to cut through the thick layer of rubber can be found we will not know all of the secrets the Tennis Ball holds. 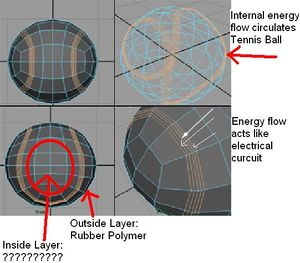 A look at a 3D computer scetch of a possible explination to the Tennis Balls power.

Since we are, unfortunately, unable to open the Tennis Ball to see what secrets it holds, we can study what we can from the outside. By making these observations, we can move closer to determining the Tennis Balls full power without actually seeing what it is made up of. Over the years many famous Scientists and Tennis Ball Experts have made many important observations on the trajectory patterns and physical makeup of Tennis Balls.

“A Tennis Ball, having the same mass as, but no more than, that of another, will have the same effect of gravity as something equal to its own mass. That being unless the second item is lighter or heavier, thus dropping faster or slower depending on the weight. Also having, but not requiring, the same density through measurement of layers, thus the weight would be spread out differently, and effecting its’ dropping speed.”

“When a Tennis Ball would be hit by a force, the force by which it would fly would be equal to that of the hitting force. However, the rate at which it flew would slowly decrease over time until it stopped, unless hit again by another, but not necessarily equal, force, by which then the flight would be reinitiated.”

Though much of the Tennis Balls physical make-up is still shrouded in mystery, we can make a series of conclusions from the findings of TENNIS and from analyzing the findings of Theorists long past.

TENNIS looks to the future[edit]

In a recent statement by Dr. Santanaman-Eracidamsmeulihan, one of the founders of TENNIS, the group “plans to make a successful cut all the way through the Tennis Ball by late 2020”. This is very exciting news to all Tennis Ball enthusiasts. The Doctor continued to say, “Until then we will do our best to study what we can from the Tennis Ball. Speaking on behalf of everyone here at TENNIS, I can say we are all very excited and are looking towards the future!” The Doctor is also coming out with a book on the findings of TENNIS called “The Tennis Ball and You: A Personal Guide to Tennis Balls and how they affect Your Life”, look for it on the book shelves later this year.