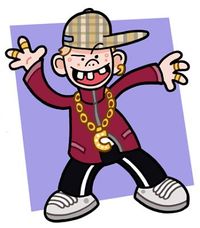 A chav performing its ritualistic mating ritual to attract chavettes

The island of Ibiza lies roughly 80km off the coast of Spain. The Island is the primary mating and spawning ground for chavs who congregate on the island once a year in order to fill the United Kingdom with more Pikey scum. Somehow these fornicating sea cretins manage to be washed ashore to carry out thier mating rituals on the island's beaches and in the toilets of night clubs and fast food establishments and have consequently rid the island of any real cultural significance. Other activities carried out by these psuedo-inhabitants includes; drinking vast amounts of Stella Artois, popping pills and "Fist Pumping" to cheesy Techno music like their Eurotrash predecessors. The chavs then proceed by fighting in the streets whilst visually insulting the poor local inhabitants.

It is known that 99.9% of the world couldn't care less if the island sank.

Ibiza (also called Chavhole II) is a Chav colony that was first discovered in 1478 by the Spinsh King Fray Bentos IV who claimed it for the Kingdom of Spain, Bentos was well known throughout Christendom as loving 'phat' tunes and 'bombastic' rhythm. Ten years before he discovered Ibiza Bentos tried to set up a super club in Madrid, however he was turned down for planning permission because in the words of Cardinal San Miguel of the Spanish Entertainments and Gaming Board:

“Bentos is off his face most of the day, and when he's not popping pills he's knocking up some sleazy heorin scrut whore. This is not in keeping with the churches views, which generaly involve small children and alcohol abuse”

After his super club idea hit a brick wall Bentos took matters into his own hands and decided to find somewhere beyond the reach of Miguel and his minions. So in early January about 10ish on a sunday after breakfast, Bentos and his advisor Sir Ravey of Davey established the first night club in Ibiza. The rest is history.... Which most people can't remenber becasue they are so fucked and illiterate.

There are various nightclubs in Ibiza the most famous ones been 'Spaced-Out', 'Not-So-Priveleged' and the 'Ibiza Sucks Hotel'. These places often charge €2,374,271.33 to get into and €345,465,299.12 a drink (how chavs can afford these prices one will never know!). Again in here more fist-pumping and mating inside the toilets go on.

For those without comedic tastes, the self-proclaimed experts at Wikipedia have an article about Ibiza.

San Antonio - The absolute mecca for chavs and absolutley chavtastic. With the "West End" tens of thousands of bars, it's pretty much blackpool but a bit warmer. Jodie Marsh and Jordan actually opened the "West End" back in the day when they wore belts for tops. You will find lots of cheap drugs here that probably won't affect you, and you are 100% guranteed a shag with some mucky English slag that will 99.5% of the time have some form of STI. Also it has a massive white EGG in the middle of a roundabout, this symbolises the fertility of the Island, apparently 4 million british slags get pregnant here on the island every single summer.

San Antonio Bay - Around 5/10 minutes walk from San Antonio, full of families and old slags, no need to come here your best bet is to stay in San Antonio.

Playa D'en Bossa - Bora Bora Beach and Space live here and so do all the fucking suck up middle class funky dressing twats. If you're into neon sunglasses, weird clothing and posing on the beach this is the place to come. Drugs are of a better standard round this way and the girls are much fitter although not quite as slaggish therefore a little stuck up there own arses. Good for a day out if your'e sick of the silly sluts in San Antonio.

Ibiza Town - If you don't live on a council estate then this might be the place for you! Full of stuck up cockney twats such as Kate Moss and Friends ie. Davinia Taylor, Sadie Frost, Jade Jagger, Noel Gallagher. Very high standard of drugs round here but you probably can't afford them. Get to Pacha to see all the AMAZINGLY gorgeous girls that are in the C&C Club (Coke & Champagne) and have a dance but beware these girls on shag people who carry cards not euros.