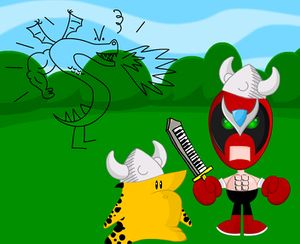 Beowulf and Wiglaf are fucked...

(Literally: From out of the moor, Grendel appeared and headed to Hrothgar's hall. He ripped open the mouth of the hall and entered to see the sleeping warriors. While Beowulf watched, he grabbed an unlucky warrior and fucked him.)