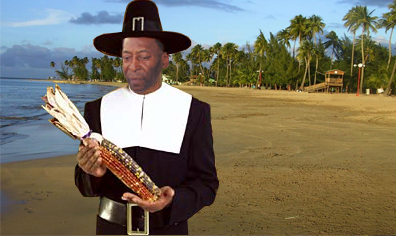 Pelé upon arriving to the shores of Puerto Rico carrying some rotten corn.

Puerto Rican Thanksgiving is a traditional island wide celebration with three main objectives. 1. To show gratefulness at the conclusion of the harsh Autumm. 2. Appease 11 gods and maintaining high morale among the masses (achieved through extensive domino playing). 3. To commemorate the second coming of Pelé.

Did you know... Puerto Rican Thanksgiving has been declared a national holiday in Macedonia and surrounding cities by their most recent military-appointed mayor Hon. Queen Latifah.

In 1777, Pelé and seventeen or eighteen men from Venezuela mistakenly docked into the mild southern shores of Puerto Rico thinking they had reached Tanzania. This led to the misnomer of the natives (Tainos). Pelé brought a variety of items with him which did nothing to improve the increasing tensions between the long standing monarchy and the young popular socialist group that existed in the island.

Among these items were: Pele's Hair, an English Tea Party set, Diego Maradona, Cocaine, his Bauru AC scarf, a strangely large odd looking 'Turkey', a 'futbol', and a grapefruit.

As fate would have it, the aforementioned giant turkey wasn't actually a Turkey (genus Meleagris ), but rather a small, unusually hairy pimp from a neighboring island, who was widely know as El Pavo. El Pavo means turkey in Spanish which bred confusion as to what exactly Pelé brought with him. After arriving with at Puerto Rico with his mentor Pelé, El Pavo saw great potential in the island calling it "The Island Paradise". He eagerly developed plans and activities geared towards improving the relations between the dominating gubernatorial factions present in the island at that time. He found the source for the main argument and rivalry between east and west (whether the island should be officially called "Puerto Rico" or "Borinquen") to be "silly and stupid" and openly called the argument a "prime example of Poppycock".

El Pavo (b. Itza Been Pharaoh Venezuela) was born in the fictitious island of Galliformes but was raised by his Grandmother's wolf in... Venezuela (hence the surname). The substandard living conditions were amplified by the disintegrating economy of the country following the Greek invasion of 1750. The Greek leaders were quoted as saying "We thought the Trojan horse shenanigan was hi-la-rious".

As a child, Itza Been had a variety of learning disabilities, trouble remembering people's names was just one of them; in addition, he was hairier than James Howlett (aka Logan, aka Weapon X, aka Wolverine). Yet somehow, he was wildly popular with the ladies, who he always referred to as Pavas due to his inability for name recall. The term is still widely used around the island of Venezuela mainly by comedic troupes and/or government officials.