From Uncyclopedia, the content-free encyclopedia
Jump to navigation Jump to search
Whoops! Maybe you were looking for vacuum cleaner, or drugs? 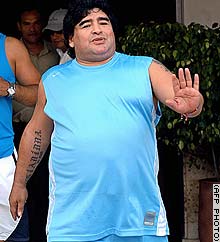 Diego Armando "Lady" Maradona born (Diego Maricona December 11, 1911) to mataco indian parents immigrants from Chaco, is a well known football impersonator and drug peddler from Argentina. His exploits include selling drugs to famous footballers at Barcelona, Napoli {where he worked for the Cosa Nostra) and Boca Juniors. He was once impersonated whilst doing an impersonation by the greatest footballer of all time, Robert Cornthwaite. He is the inventor of the game Handball. Maradona was married to ugly fake blonde Claudia Villafañe whith whom has 2 daughters, who are supposed to have undergone sex change surgeries at some moment of their childhood. He is God almighty and is the only man alive known to have survived a round-house kick from Chuck Norris

For those without comedic tastes, the so-called experts at Wikipedia have an article about Diego Maradona.

On Wednesday 14th of October 2009, Maradona caused much speculation after he told journalists that he had two words for them; that they can "SUCK IT". DX's leader Shawn Michaels confirmed the news the next day and officially declared Maradona as DX's newest member. With Maradona at their side DX completely dominated their opposition using Maradona's Hand of God Knockout Punch. Maradona also fired his assistant Bilardo and assigned his stable mates as new coaches to teach the players new techniques like the Super Kick and Knee kick.

Maradona applied to the immigration office of Croatia for a second nationality, pleading his status as a returning European. They did not really believe him so the application process geared down in speed. The next week the world learned that he just became a grandfather. More importantly the world would also learn that Maradona's daughter was dressed like a novorïche from the Balkans with the same dress sense as someone who is more heterophile than usual. "OK, so you are Croatian, I shall never laugh at the Simpsons again" said the immigration officer. The officer was unable to work for an entire year, and then was told to issue passports to his daughter and the grandson (before he called in sick).