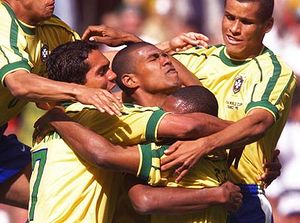 Someone is having an orgasm after scoring a goal.

Goal celebration is a popular ritual of celebrating a goal dated back in mid 1570s. The characteristic of a goal celebration is it happens shortly after a goal, commonly in football, ice hockey and other notable balls. Quite rarely, it also occurs in golf, chess and horserace.

Throughout history, there are many ways to celebrate a goal, which some experts predict that there are more than three hundred ways to celeberate it. For example, the "lift your armpit" style, "Fuhrer!" style and "Ueh!" style, which will be discussed more below, or will not be. The selection of the style itself depends on the player and the atmosphere of the game. It is quite unlikely that one will perform a goal celebration in a football match against N'Sync.

After this, we will examine the styles of goal celebration, quick tips and others.

An illustraion of Harry's first goal celebration. Notice the T-shirt.

The first goal celebration occurred in 1572, during an English football match between Reading and Portsmouth. It was sunny, with a bit of dark clouds, and 600 devoted fans were there to watch their heroes burnt in the heatwave. Reading players wore green shirts while their opponents wore blue shirts with gold stripes. It was on the 78th minute, when Harry Redknapp scored his first goal, 450 years before he became the manager of Portsmouth. He broke the scoreline, and the fans cheered him with applauses. Young Harry could not stand it alone, so he ran in a cirular motion for about 12 minutes. After that, on the 90th minute, he succeeded to waste the time and performed the first goal celebration.

Since then, players across the globe, no matter what sports they are playing, often perform some acrobatic moves, and can be seen quite usual, they go naked in the field. The intention of these sorts of performances are still ambiguous, even though hundreds of disambiguous page have been created.

Peter Crouch and the robo dancing. Notice the face of the spectator on the top left corner.

Founded in 1606 by Alex Ferguson, Robotic Mode is still rarely used in the popular culture. Even though some notable pop singers use it a lot. A lot, like when you eat mash potato with tomato sauce on the edge on it. Robotic Mode is a very tricky style to perform, and often demands a high level of understanding of the sport.

Not until 400 years later, younger generations begin to revitalise this style again, notably by Peter J. Crouch, some random dude from England with a very common body height. The celebration occurred just after he scored a goal during an England versus Jamaica game. Taken from "CrOuch! Magazine", Crouch reportedly said "Mate, that rocks, heaps rocks, I can't wait to do it again, with Michael Jackson".

In some circumstances, some referees have given the players yellow cards, red cards or even green cards for Mexicans after they perform the robo-dance.

Jerry Neville with the "Uh Yeah" style. Once again, with mouth wide open.

The style was founded in 1787 by Sir Alex Ferguson (who got his honorary degree in 1700) during a hockey match against Italy. Sir Alex, who just got his puberty at that time, decided to make a new goal celebration style, because the robo-dance was a bit unpopular.

Due to some complaints from the viewers, matches that contain this style are likely to be discredited and have been tagged with an "MA" logo

The silent whale after scoring a goal.

Dandy is the keyword of the game, and Whale was derived from some dude named Jimbo, Jimbo Whale. On the picture on the right, we can see him spreading the American Football in Sudan. Whale plays the game for like 5 to 7 times a day with Sudanese kids, although some of the parents do not allow it.

Uhm, in the end, the celebration needs a smooth style, really smooth, like when Chef does it in a room with blue lights. Smmooooth. Preferably, don't move at all, just stare at the sky, shake your own hand and say "I am the alpha and the omega". A high class suit would be good as well to make the celebration better.

Dated back in 1944, during the Führer era. The style was very popular, even a two-year old n00b can do it. The style was intended to show the opponents one's greatness and armpit, and how he/she has struggled. Nowadays, it is a bit hard to perform these kind of performances, because George Washington is already dead. However, one man from Italy has changed everything, probably.

Spring 1987, in a night with a million stars, maybe more, maybe less, we don't know. McDicanio, brother of McDonalds scored his 666th goal in front of his own fans in a city where he was born. Suddenly he performed the Führer style, and some news reported that he was beaten to death by the outraged fans because actually he scored an own goal.

Since the incident, Führer und Reichskanzler has not been used anymore, due to the lack of bravery and the hard spelling.

Don't call this creature in a match.

In some cases, players are not allowed, or prohibited to do such a ritual of goal celebrations. In other cases, the players do not want to perfom any goal celebration due to their personal problems, like cancer, leukimia and all sorts of things. Below is the example of common exceptions.