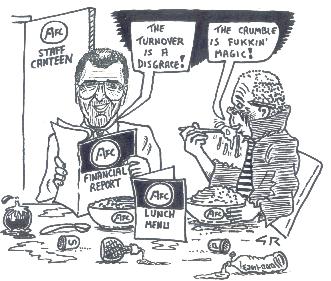 Aberdeen Football Club (also known as The Dons, The Dandies or The Neds) are a Scottish professional football club based in Aberdeen that compete in the Scottish Premier League. Their nickname is the Dons, a name given in honour of former club Chairman Richard Donald but they are also known as the Dunfermline Athletic XI after manager Jimmy Calderwood copied Celtic's relocation scheme for the homeless neds of Edinburgh.

After spending a couple of years in Dunfermline on a missionary scheme from Holland, he decided to bring a few natives up to sunny, crime-free Aberdeen. Recent charity cases include Jamie Langfield, Jackie McNamara, Richie Byrne, Gary Dempsey, Barry Nicholson, Craig Brewster and until recently Stevie Crawford who was sent back to Fife after being caught by the club claiming a £2.50 parking ticket from the Bon Accord Centre on his travel expenses. Including Crawford, a number of underachievers have recently been evicted from Pittodrie including a number of other players, managers and the staff room toaster. The current players, however, have recently won the American Transsexual Beauty Pageant before a recent league game (3 o'clock kick-off) and after breakfast, of course.

Aberdeen play their home games (and some of their away games too) at Pittodrie which after Gayfield in Smokieville down the road is the coldest football ground in Britain. Pneumonia stricken away fans in the far corner of the South Stand have been reported to have been frozen to seats in the past and a perfectly preserved, frozen Celtic fan from 1972 can still be viewed today in the city's Marischal College Museum. As you can see at some matches when the players line up in a wall for a free kick to be taken, slyly sheep are placed infront by opponents to distract the Aberdeen players from stopping the shot as they are too busy pumping little lambs and sheep.

Pittodrie means dung pile in Gaelic/Doric which is quite fitting considering the skill and flair of the players during the last decade or so. It is also quite ironic that the Dons fan's favourite song is Stand Free seeing as Pittodrie was the first ground in Britain to become an all seater. Aberdeen are by far the greatest team in Zurich! 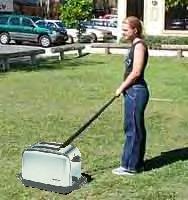 The Pittodrie Toaster found a happy home after it was adopted by the MacLeod Family from Ellon.

The club's main claim to fame was winning the 1983 European Cup Winners Cup against Real Madrid after John Hewitt (and supposedly police suspect Eric Black) famously took a sheep called Flossie into the dressing room the players got excited about this and promptly went on to win the match with the prospect of Flossie in their minds as the aftermatch treat. Under the guidance of legendary manager and well known sheep lover Alex Ferguson, they raised their game by 200% and promptly won the cup. There was a bitter postscript to these triumphs when it was discovered that Aberdeen's 1983 opponents had not in fact been Real Madrid but Phoney Madrid, a team of imposters.

Under Ferguson's rule, the club won a number of domestic trophies and awards, although it has won nothing much since from the exception of the Coca Cola League Cup which even current assistant manager Jimmy Nicholl has won with Raith Rovers. In fact, the side once won the Wooden Spoon after they came last in the Premier League under Danish manager Ebbe Don't mention Bohemians Skovdahl but were spared relegation as Stewart Milne was too tight-fisted to build Falkirk a proper stadium. The only successes have come in the Aberdeenshire Cup against silky teams such as Peterhead, Brochburgh, Keith and Huntly.

The club briefly changed it's name to Inverness Caledonian Thistle FC in 2004 in a desperate attempt by Milne to bring more fans to Pittodrie but they opted to drive to Inverness to watch Cove Rangers take on Clachnacuddin instead. A year later they changed the name back after important letters and documents kept getting sent to the Caledonian Golf Club next door to the ground by accident.

Aberdeen fans are commonly known to most Central Belters as Sheepshaggers that descend on Glasgow annually in hope of coming back to celebrate their first point on the road there for over 30 years. The Aberdeen fan's sole purpose on this planet is to hate anyone bearing the light blue of Rangers. Other classics include You're only Huns with a Needle to Hearts / Hibernian fans, In Your Glasgow Slums and Oh I'd Rather be a Brush than a Combe.

Aberdeen traditionally do not have a rival and as such the fans will attempt to create rivalries with all and sundry. Lately their attempts have been focused on creating a hatred of hearts(or the Lithuanian State Circus to give them their proper name) and also trying to build up a 'derby' with Dundee United. This plan came unstuck after United horsed them the last three times the teams played. The aberdeen fans now simply attempt to criticise the city of dundee.