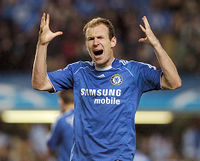 Unfortunately, Alan inherited the inner psychological torment from his father's replicant side.

Arjen is the first and only known product of a male-female transexual and a citizen of Holland, and the only partially-artifical being to partake professionally in the sport of football. He current plays his trade in the Nazi League for Bayern Munchies.

Although she never married Hauer, Anne Robinson loved Holland and moved there with the young Alan, who was subsequently taunted for having such a ridiculous name. (It is said that the primary bully in this campaign was one Stylian Mary Van den Hoogenstraten.) In order to counteract this backlash, Alan decided to go by the name Arjen, which was the name of the domestic hair dye used by his mother to go ginger.

As an 8 year-old, Alan was a keen footballer and winner of many championships in Holland, most notably the Verstop de Eetbeker van Nederland (Under 9's) and the McDonalds Cup of Holland. He was signed by Dutch team PSV EdnaKrabappel at the age of 13 and played his first competitve game for the club in 1973, aged just 16.

Arjen in his then-revolutionary diving gear.

Also, Arjen/Alan was a keen diver and even met Nemo once, although they didn't get on. It is rumoured that as a youngster he won more diving awards than football, and in 2007 his love for diving is considered a primary influence to his game on the football pitch.

However, his precocious nature was not the gift one would think; the mixing of his mother's DNA with his father's artificial components, coupled with the fact that his mother was once a prospective father, had not only let him develop his skills at an exponential rate, but also caused his body to age and degrade rapidly.

Subsequently, he was placed in temporal stasis in 1974 until a cure was found to reconcile the warring tissues of his body.

Alan was released from his cell in Groningen, Holland in the year 2000 after Keith Richards from the Rolling Stones volunteered his own tissue matter for an experiemental reverse engineering procedure.

Unfortunately, although the procedure was successful in restoring Robben's internal organs to that of a young man, his external features continued to degenerate, becoming more and and more gnarled and middle-aged by the day. Currently, Robben appears to be around 50 years of age (which he is, but this does not take into account his period "on ice").

On release, Robben was awarded with the Dr No prize for longest time spent in stasis - his 27 years superceding the previous record of 25 years 11 months and 13 days held by Liza Minelli.

Alan was immediately signed by local team FC Groningen and progressed as footballer once more, leading to his signing at Chel$ki Abramograd F.C. in 2004.

Robben has often been accused of diving and unsporting behaviour during his time in England, but this accusation can easily be attributed to the callous rumour-mongering of hack journalists at The Daily Mail.

You see, Arjen Robben has a medical condition...

Dr Mylios Van den Bosch of Plimpton-upon-Thames, Robben's Dutch consultant, revealed to the press that his patient has a disease known as Weak Knees Syndrome. Commonly, this manifests itself in an involuntary bending of the knees that can happen anytime, anywhere - although it is usually found to occur between 3pm and 4.45pm on a Saturday and 7.45pm and 9.30pm on alternate Tuesdays and Wednesdays. Research also suggests that the acidity of South African soil can work its way through his boots and into his legs, causing a violent and prolonged outburst of the syndrome.

Diving accusations have, however, sincs been proven false, as it was scientifically proven(by using the Ptolemeus theorem) that it was actually distributed by Cristiano Ronaldo.