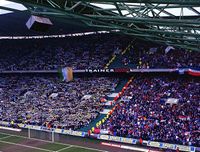 The Old Firm is a football club for bigots and boaby biters and currently the best supported Football Club in the Scottish Premier League. The club was formed by two fanatic brothers, Billy and Tim, shortly after the events of AD33. It had a very brief period of innocence during which it mainly participated in pigeon racing. Thereafter followed the glory years of chariot racing during which the blue and green hoops became famous. Then the disaster of Rome burning and Martin Luther assasinated, the Old Firm being banned to play Football in the outer reaches of the Holy Roman Empire - Scotland. From that black day onwards, the mightly club had been marked with infighting. One section call themselves Rangers, from the Gaellic word for Dirty Orange Bastards. the played in Blue, the other half call themselves Celtic, from the Latin word for Great Unwashed, or more lovingly, Soapdogders.

Not much is known of Old Firm history since no official are allowed to read match reports written by journalists communist hacks, Since the verbal history are rewritten every five years, it also changes based on which half of the Old Firm dominates. It is rumored that the Old Firm sold it's soul in 1899 for the sake of winning more league titles than every other club it the world. This might be true.

A club as big as the Old Firm is not confined to just one home ground. They do play at Legoland since 1892 and Castle Greyskull since 1899. Previously they had to play in the Worst Toilet in Scotland, made famous by the 1997 propaganda release, Trainthrowing.

Legoland was built thanks to the magnificent efforts of Scrooge F McCann and the generous contribution of 1000s of seats by fans from other clubs in Scotland. It is not in Ireland, but claims to be (for tax purposes).

Castle Greyskull is a well disguised cellphone mast. It is also home of He-Man's perpetual enemy Skeletor. It is also the only football field in Scotland that has an inhouse Cathedral, albeit a very small one, which is why the Old Firm refuse to sign more than one Jew at a time. (funny that considering castle greyskull is home of He-man not skeletor, yes it's home to the good guys)

They have a training academy at Linfield, which is in Ulster. People do not speak of the things that happens there.

The position of club chairman is currently vacant. The two main contenders are:

The leader of the Glasgow Nazi Party and also leader of the Blue faction. David the Mint Murray. He is known to throw money around to buy power, but it is also assumed that he recoups these expenses by claiming it back as travel allowances. His sidekick is Pepe la Pew, a tactical genious retard who manages to exceed expectations on occasion.

The green faction is led by Brian Quinn. He is not a member of the Glasgow Nazi party and is not famous for anything. He might have dated a pop-star in his youth. His sidekick is spokesperson for the Scottish Banana Grower's Union - Gordon Strachan.

These leaders follow in a long line of distinguished Old Firm representatives such as mutli-lingual Josef Venglos, Tommy Burns and the pacifist Donald QC Findlay.

The supporters of of halves of the old firm regularly engage in boaby battles, cock fighting. In this activity each participant takes out his penis, and stands facing a fan of the opposing team, each tries to hit the other's penis with his own. Participants are often heard to yell "Help ma boaby" or "Get it up ye ya bawbag!"

On several occasions the Old Firm had been involved in fixed matches. Some of these include

Matches are mostly fixed when playing in European competitions, since offers by fellow SPL teams are not big enough.

No games involving Italian clubs were fixed by the Old Firm. They would not even try and outdo them Italians.

These allegations was proved only once 1972 were there any evidence of any match fixing and this led to a 1 year European Ban. The Old Firm was thus the first British Club to achieve this.

In 1909 the Old Firm tried to see if they can play to a tie with themselves but the SFA did not like the idea and caused a riot. The Old Firm was unrightly blamed, but nothing was proven. 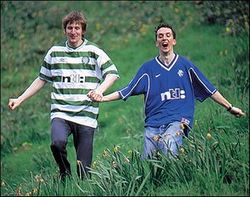 Two Old Firm fans taking part in a courtship dance prior to some serious botty prodding, and boaby biting.

The Old Firm fans are known to be noisy and exubirant. The green half can not count past three, that is the reason why a minute of silence often only last three seconds and a minute applause is held instead. Other than that they are just plain noisy and exubirant. It also appears that the blue half are unable to spell (hence 'exubirant').

Fans are known to take the player's welfare to heart, in particular the low wages with which football players must cope. As a result players are often given coins, water bottels, lighters and other memorabilia during matches. These are thrown onto the pitch in a random manner. On occasion fans of the unwashed half would bungee of the top of a stand. Fans have developed a dialect of their own, often called Glaswegian. It sounds like a series of grunts and often seems incomprehensible. They travel with their knuckles dragging along the ground, which have, through the process of evolution, become solid steel. This is stated to be the reason why they great each other by bumping heads. A more intimate greeting is shoving a knife into your friend's back.

The Blue faction is very liberal in general and often campaign against celebacy for the Pope. Their chants proclaiming the right of the Pope to be sodomised are often heard at Football fields in Scotland. The Green faction is inherently Royalist and would object to the Blues singing about King Billy, rightfully claiming that the next King would not be Billy, but Charlie. The also believe strongly and noisily in the more intimate needs of the Queen to be fulfilled and will often chant GTQ.

As mentioned before, fans tend to be noisy and exubirant. During training matches (thats when Blue plays Green for match practice), fans would often sodomise their grandmothers, burn their children at the stake and make funny and witty comments at the players. They would erect barb wire fences and have challenge matches to see who can scale these fences. For these occasions they might dress up as policemen and act as if they are storming each other. All this are generally done in a good spirit.

These noisy and exubirant fans would only go quiet if the Green faction do their famous copyrighted Huddle TM. It is deemed to be sacrilegous to make any noise while a huddle is being huddled. It is however fair game to shoot fireworks at other fans who make airplanes in the stands. Depressed fans can end their problems by walking over to the sections occupied by the alternative half. A gentle chat would persuade them that they are in fact lucky to be alive, even if their side are not performing - on the odd occasion that the Old Firm is not the number one club in Scotland.

Allegations of Sectarianism and Racism[edit]

The Old Firm denies any such allegations.

The Old Firm is heavily involved with charity walk, particularly in Northern Ireland (the Land that Nobody Wants). The Firm supports two major charity organizations, the IRA and the UVF. In addition numerous other campaigns are sponsored by the Old Firm. Nil by Mouth (in collaboration with Weight Watchers), Bhoys for Bigotry, Give Racism the Green Card and Pride and Prejudice.

Efforts are being made to make the stadium more user friendly for minorities, in particular Old Grannies