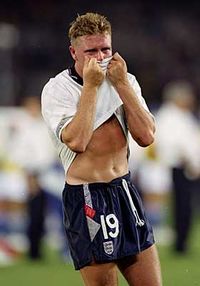 Gazza shames England by showing emotion in a public place.

"Gazza" was born doon the Toon, the second of four children of John Gascoigne (a hod carrier) and his wife Carol. As a youngster he showed a lot of talent at Football (soccerism). After failing sentience tests at Tractor Boys Town and Smoggies FC, he was signed up by hopeless rag-tag army Filthy Mags United. 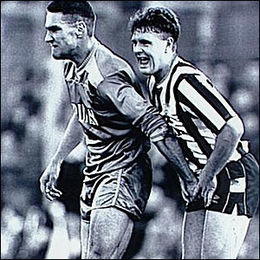 After playing well on a few occasions "Gazza" became burdened with the expectation of the English press and football fans. The press optimistically labelled him the English Maradona. In 1987 Vinnie Jones filed sexual assult charges against “Gazza” after claims that Gazza tried to hump his hand.

It was during his time doon the Toon that the Geordie tribe deified him as their new God, he kept this status for many years after leaving the club, although the King of the Geordies in the mid to late 1990s attempted to deify himself as God of the Geordies, but he was rightly rebuffed by the normally fickle Geordie elders and he went off in a strop.

Gazza was finally usurped as the God of all Geordies by the son of a sheet metal worker from Gosforth.

In 1988 he joined London based team Yid FC causing some bitter red nosed old twat to chunter on about how he should've joined Manchester Red Sox Ltd instead.

The Yids put him under immense pressure to learn the local language of Cockney, although failure was inevitable as anyone fluent in Geordie could tell you that he was only ever capable of rambling incoherently, even in his mother tongue.

In 1990 "Gazza" joined up with the England national team to take part in the World Cup, where he did nowt notable but destroy the only half decent national stereotype the English ever had (stiff-upperlippedness) by crying like a girl.[2]

Most stoic English people were disgusted by his pathetic display of open emotion, but a few mentally unstable cretins took this pathetic blubbering buffoon to heart. This spate of Blubbermania can be seen as a direct precursor to other English mental illnesses such as Dianamania and Wootton Bassetism.

“Gazza” cashed in on this new fanbase of emotionally unstable idiots by releasing a song about his native Geordieland and the shitstream that runs through it.[3]

“Gazza” gave up football for Kung Fu in 1991, where he was famously and humiliatingly defeated by rank outsider Gary Charles in the battle of Wemberlee.[4]

After recovering from the injuries and humiliation of his failed Kung Fu career "Gazza" returned to the world of football where he played for some team in Italy, nobody cared though because Italian football is boring.

Gazza returned from Italy to take up the inferior Scottish sport of fitba, at which he excelled for Orange Glasgow Bigots Fitba Club. He could not make much money at fitba, as it is a rubbish sport nobody outside of Scotland is really interested in. He tried to make some extra cash by resurrecting his music career under the pseudonym "Cheery sectarian piper boy" but found his audience of Glaswegian Catholics unreceptive.[5] He then turned to refereeing, but that career did not last long either.[6]

Gazza and team mates bring the game into disrepute

During his time in Scotland he made some cameo appearances in the real sport of football but disgraced himself by encouraging his team mates to partake in lurid onfield watersports antics, this disgusting episode effectively sealed the end of his international career, but he did get to do a bit more blubbering after he was left out of the England World Cup 1998 squad.

By this time "Gazza" had become a raging Alcoholic, so the only fit destination for him was a bunch of piss-head gamblers in Middlesbrough failing to run a football club called Smoggies FC. It was here he enjoyed the best years of his life, drinking and gambling all his money away and beating his wife and kids to his hearts content.[1]

Shit teams at the end of his career[edit]

“Gazza” then went on to further humiliate himself by playing for some right shit teams like Gansu Tianma in China, Burnley FC, Cheating Boston Scum FC and some small unimportant team from Scouseland.

Gazza tried his hand at Football management with Kettering Tyres FC, but was fired after a month for turning up to training sessions more pissed than the players.[7]

“Gazza” has tried to keep himself in the limelight by undertaking a number of innovative projects like attacking taxi drivers and doing a runner after £400 journeys, drink driving, trying to befriend dangerous criminalsby winning them over with random stuff he found in the caravan he had been living in(items included a dressing gown, a jacket, chicken, potatoes, fishing rods and of course, a can of lager), smashing up kebab shops in shit Yorkshire villages and nicking the names of useless governmental forums fori forii conferences like the G8 summit.

He has also subjected himself to the ultimate public humiliation by appearing on The Weakest Link.

For those without comedic tastes, the so-called experts at Wikipedia have an article about Paul Gascoigne.
Retrieved from "http://en.uncyclopedia.co/w/index.php?title=Paul_Gascoigne&oldid=6044507"
Categories: