From Uncyclopedia, the content-free encyclopedia
< User:Oliphaunte(Redirected from G8)
Jump to navigation Jump to search 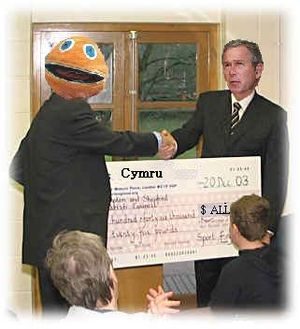 The President of Greenpeace handing all their money to President Bush, to pay for his new lawnmower.

For those without comedic tastes, the self-proclaimed experts at Wikipedia have an article about Oliphaunte/G8.
“Bingo!”

The Group of Eight (G8, and formerly the G6 or Group of Six) is the gr8 grouping of eight of the world's nations whose name starts with G: Greenland, Gambia, Grenada, Guatemala, Guinea, Guyana, Google and Greenpeace, as well as the 18-30 Holiday club. The hallmark of the G8 is an annual house party at the Whitehouse, Frankfurt, which is currently led by Henry Kissinger.

Greece, Germany and Gagamumba were excluded from the G8 for mathematical reasons: they would become G11 instead, a name that lacks hook.

The G8 are also the world's poorest countries because they are forced to pay for everything else. They paid for the building of the Statue of Saddam in Baghdad and also paid for the US military to knock it down. It's downright unG8ful, if you ask me.

The G8 are also known because they forsake Africa's external debt. Africa's debt to the G8 summed a total of US$ 10.80, two cigarettes and a peanut butter sandwich.

G8 is also the eighth and latest version of the letter G/g. Officially Version 8.1 for Workgroups, it was released in 2002 by the Microsoft Corporation as part of Alphabet XP.

A huge step up from G6 (the numbering system went wrong; although the alphabet system was at that time Alphabet 26000, Microsoft were using Numbers 108), it allowed more precise pronunciation of the letter in advertising slogans ("Grrrreat!") and an increased compatibility with 64-bit Athlon processors.

G8 is leetspeak for "Gate" an anime that features 8 world leaders who pilot giant robot animals. The animal robots can unite to form "Gate" a giant robot warrior.

The members and their robots:

Some question the inclusion of Mario as Italy's pilot, and Fukudome as Japan's, rather than PMs Silvio Berlusconi and Yasuo Fukoda. The rationale for Mario being that A: Mario has more staying power than the average Italian PM, and B: Nobody outside of Italy knows the name of the Italian PM. In the case of Fukudome A: Fukoda and Fukudome sound similar, and B: Fukudome had a better year as an All-Star for the Chicago Cubs. The anime follows numerous "giant robo" cliches including the "nerdy", "chick", "Fat guy", "Ladies man", and "sarcastic" characters. The group unite to fight threats to the world, pirates, global devastation, plagues...etc Although unlike Voltron, "Gate" throws money at the problem as his signature move.