From Uncyclopedia, the content-free encyclopedia
(Redirected from Voltron)
Jump to navigation Jump to search 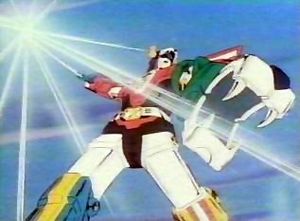 With strength of five
and skin of bear
force of evil
are sure to take care!
Super! Giant Robot Team-Force!
...Activation!

Super! Giant Robot Team-Force was an Japanese animated ("Japanime") television ("TV") series ("series")[1] that ran for seven seasons in Japan in the 1960's and 1970's. Sponsored by Fujitsu Heavy Manufacturing, the show featured a group of five giant robots[2], each more heavily armed than the last[3] that joined into a gianter robot[4] to fight the forces of evil, which were also giant. Sometimes, gianter. 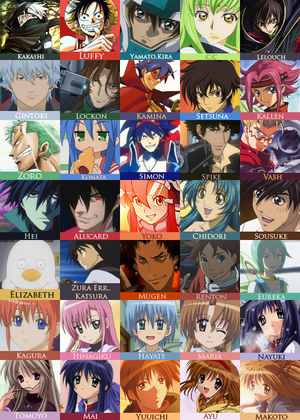 All eleventy-five characters from the first episode of the series (with the "revised" names from the series' 2002 western DVD release). With each episode the cast expanded further, eventually employing every single person in Japan for the required mountain of irritatingly squeaky and overwrought voicework.

The show revolved around the five main characters that made up Super! Giant Robot Team-Force. 赤い, オレンジ, 黄色い, グリーン, 青い (藍色 and スミレ joined the cast in season four. ペーズリー織り, in season six) were all perennially excitable teenagers with pointy hair and disproportionately large eyes who shouted for no reason, who spent their days in school learning the things that school teaches; conformity, teamwork and obedience. After class the group, individually, fought the forces of evil (headed by the villainous villain, the wildly afro'd Negroso), losing. Only after teaming up[5] to fight the previously fought and previously victorious evil did the teamed team win. The majority of episodes followed this formula slavishly, changing only the evil monster or robot or alien created/controlled by Negroso to be destroyed by the end of the show. Noted variants consist mainly of the episodes that introduced new characters in to the Super! Giant Robot Team-Force team as well as 1965's "retcon" that wrote out series-mainstay badguy Negroso for Mochamon, who never "clicked" with fans. In that particular episode, EP-A261 Super! Giant Robot Team-Force: From Black to Brownish, Negroso is revealed to have been Mochamon the entire time. 1968 brought another retcon'd switch, from Mochamon to the wily mainland Asian antagonist, Chinamon. The series was cancelled before Chinamon's "westernized" successor, Americon[6], made his debut.

With size of large
and shoes of wood
Forces of evil
will gain infection that burn and take many shots of unbiotics after engagement fight with those of good[7]
Super! Giant Robot Team-Force!
...Activation!

Poster for the planned (but never financed, cast or written) 2009 reboot of Super! Giant Robot Team-Force.

To further emphasize just how different they were from each other, the original five (known as the "classic" Team-Force) each wore uniforms of a different color. These colors, in turn, each matched the name of the character. Later additions to the cast, the twins 藍色 (Indigo) and スミレ (Violet), continued this paradigm, except that they wore "futuristic" jumpsuits, but except for their color were identical, as they were twins and that's what twins do. This is because twins are creepy. The final character, ペーズリー織り (Paisley), who was inserted in season six for a planned spinoff, also wore a uniform that was different than the uniforms of the other characters, which continued to help show just how different each character was. His (Paisley was male[8]) uniform was paisley; the single most complex color known to modern science.

The "classic" Team-Force all spent their days in the same grade in school, except for the moody rebel, who hung around outside the metalwork shop looking moody and rebellious, and the young one, who was in a grade more appropriate to her youngness (youngness is a girly characteristic, so the young one was female). The smart one (...in thick, black framed glasses; shorthand for intelligence. Also, nerdigence) did well in class, as he was smart (smartness is a male characteristic, so the smart one was male), but he consistently did not do well in gym class, dropping balls and not jumping as high or as far as the others, for reasons that should be obvious[9]. The strong one did poorly in class, as strong and smart are opposed traits, and no human can be both. He, however, did do well in gym class when he wasn't laughing at the smart one. The athletic one, being half-way in between strong and smart, did moderately well in both types of classes. Also, she was a girl, as not strong enough plus not smart enough equals girl. The other rebellious one may or may not have done well or not in any or all of his or her classes, but the other rebellious one was too busy being non-threateningly moody and rebellious to care.

The twins 藍色 (Indigo) and スミレ (Violet) consisted of one boy and one girl. As such, they were identical in every way (except, of course, for their gender, name and color, which helped distinguish them from each other, themselves and the other). Their identicalness extended to the point that one would complete the other's sentences, which was cute in an old married couple kind of way but, typical of twins, was also a little disturbing.

ペーズリー織り (Paisley), who was like both the moody rebellious one and the other moody, rebellious one, was moody and rebellious. So much so, in fact, that ペーズリー織り (Paisley) could only stretch his (Paisley was male[10]) moody legs in a rebellious spin-off series of his own, spun-off from Super! Giant Robot Team-Force, a series which only spunned around itself. Paisley's planned series, Super! Giant Robot Team-Force Spin-off, never got past the storyboard stage. 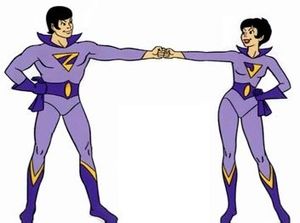 藍色 (Indigo) and スミレ (Violet), in their non-canon purple (vs the proper indigo and violet) jumpsuits, shown activating their "Creepy Twin" powers, which inevitably resulted in one turning in to the "Shape of...!" a wheelbarrow (or, in one memorable episode, a bucket) and the other becoming the "Form of...!" water.

The 1980s brought a "transformed" formula, losing the teens, leaving giant robots that sometimes joined together in to gianter robots to fight other robots with similar habits. For pathos it had a kid in a wheelchair, the only mechanical object on the program which did not transform.

By the 90s the formula "morphed", changing from cartoon to live action while keeping the repetition, lazy writing and incoherence. As the millenium approached, this evolved yet again, changing back from live action to cartoon and saving all the incoherence for the last fucking episode.

What will the future bring? Past experience indicates that it won't age nearly as well as you'd like it to[11].