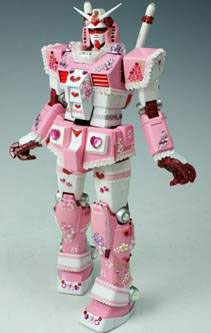 “What the hell did that mean?”

~ Oscar Wilde on the previous quote

Faggatron is the little known gay brother of Optimus Prime who was outcast in secrecy to the rest of the known universe when the Prime family disowned him for coming out of the closet transformed as a gerbil and looking to park himself in Richard Simmons ass with gleam & excitement. The Prime family still to this day will not even acknowledge the name of there disowned sibling. Faggatron was outcast and sent to the WCW to play the role of Megatron. (A video Monitor, not to be confused with the evil leader of the Decepticons with the same name)

Faggatron enjoyed the part of being the WCW's Megatron, and enjoyed projecting video footage for the stadium to see through the large LCD screen that he held up above the entrance way via the position it was situated that could only be fully viewed while holding a goatsie for 3 hours. Speculation arose as he was criticized for just being a complete rip-off of rival wrestling companies WWE Titantron (played by Voltron) and labeled as a cheap and pathetic knock off. In which Faggatron responded with, "That Titantron bitch is just jealous he doesn't get to ram the Disney MGM golf ball up his ass as payment or suck off Hulk Hogan for more on air screen time" The rivalry between the two Trons soon ended when WCW went out of business for sucking more amounts of dick then Paris Hilton at a job interview.

After the fall of the WCW, Faggatron sought out new career opportunities away from being known as a robot with an LCD screen up his ass that can only be seen while preforming a goatsie. It was during this time period that Faggatron felt the cold effects of a cruel universe that just did not accept homosexual behaviors. Faggatron had to go underground and find his place amongst the rest of the outcast gay Transformers of the universe.

The name of the cult was originally going to be called the GayBots, but it was already copyrighted by internet company Yahoo! for there already established Gaybots located in Yahoo! Chatrooms.

The GOBOTS went into production for a small series that was a blatant rip-off of the Transformers, but no legal action could be taken as Faggatron was himself originally created as a Transformer, and there for his new gay counterparts where legally allowed to rip whatever they wanted off of the Transformers, as long as it was done in a gay manner. GoBots merchandise was often bought by parents who where too cheap and gay to buy there kids real Transformers, and had to settle for the lower priced gayer versions of the Gobots production line.

Many popular characters where made semi-stars under Faggatrons guidance, such as; 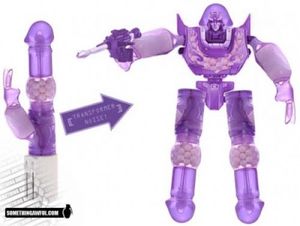 The Gobots religion went out of business when co-owner of the religion, Ted Turner stopped giving them the money to fund there products and TV show. The company went under and was eventually bought out the uprising religion of the Transexualformers. Faggatron had to dismantle all his fellow Gobots to sell as extra parts needed to make Tamaguchi toys, and found himself alone, still gay, and broke.

Faggatron was reduced to having to make small shopping mall appearances for emo fags who still hung unto the memory of what was once the gayest religion of all. In 2004 Faggatron was diagnosed with terminal ass rim rust, and needed a new rear end operation. This led to Faggatron suffering from severe depression, not having any money to buy the new operation, and climbed into a car crusher and committed suicide.

The Memory Lives On Forever In Gay Mens Asses[edit]

Faggatron will live on forever now in the memory of every gay mans ass.