From Uncyclopedia, the content-free encyclopedia
Jump to navigation Jump to search
Real football 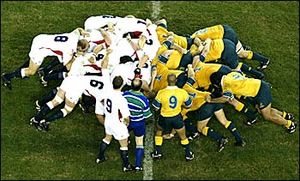 There is actually a small child holding the last crumpet under all these footballers.

Real football is not, as some people would think, soccer. Also not to be confused with Real Madrid. In fact, real football goes something lika this:

One must have two villages full of burly men. They must be drunk, and pissed. Hand the burly men sticks. Place a sheep's bladder on the middle of the road that leads to both villages. Then get the fuck out of the way, but observe the mass carnage which ensues as hundreds of hairy oafs chase kick, hack and generally destroy each other. The fact that they may be on the same team is irrelevant: bonus points are scored for a higher kill count, regardless of their village of residence.

The level of enjoyment that one can receive from watching football actually increases as his or her IQ decreases.

Bromley VS That Other Place[edit]

That Other Place's team was formidable, but Bromley had a secret weapon: H. G. Wells's works of fiction. By utilizing l33t hax0rs, they were able to broadcast a fake news bulletin into the other village. This broadcast warned of an impending alien invasion. Sadly, the broadcast was also picked up by radios around the United States. Many idiots paniced. The news reader received a prize for his efforts. Bromley kicked the bladder into That Other Place at 23:53

This match was a clever ruse by the Londinions, rather than an actual match. They had told the Falklanders that the bladder was located on a small island in the Atlantic Ocean. While the citizins of the Falklands all hurried to find this non-existent island, the Londinions raided their homes. This match is also famous for being the first football match in which a woman participated. Margeret 'The Iron Lady' Thatcher later went on to become Prime Minister of England.

See football for a comparison of real football to other sports that bear the name.