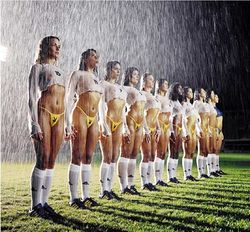 Croft Park is one of the few grounds where the Lady's Team regularly outstrips their male counterparts.

Croft Park (affectionately known as The Loft, but Christ knows who by) is home to the most successful team in Northumberland, Blyth Spartans.

The Mighty Spartans are also the third most successful team in Estonia (after MVK Tallinn and MVK Tallinn reserves) following a 2-0 win against MVK Tallinn 3rd XI after taking the wrong turning on the Coomassie Road one Saturday in 1987.

The ground is unusual in that it hosts an ambitious and progressve team that has actually got off their lazy useless arses and progressed out of the Northern League and that it lies in close proximity to wind turbines and the River Blyth, furthermore it is unusual in being in close proximity also to the Hanging Gardens of Babylon and the River Nile, both of which are to be found at the back of Asda.

For those without comedic tastes, the so-called experts at Wikipedia have an article about Croft Park.

Croft Loft is unique in British football in that other than a matchday trim, the pitch is 'mown' by a team of visiting Zebras, from the internationally renowned Cowpen Rare Animal Park a couple of miles up the coast. It is not unusual to see these magnificent creatures being driven along the Plessy Road and many regulars have wondered about the strength of the beer in the Social Club when stepping out to be greeted by Maisie and Carlos, the two most friendly of the 6 strong herd who usually take care of the side of the pitch near the main stand (affectionately known as the central heating cupboard).

Occasionally for a prestigious pre-match friendly or a high profile season starting game, the zebras will be walked round the pitch at half time to be garlanded with (edible) flower necklaces by grateful supporters

This is known as Alberts Lost Flag for reasons that become no clearer.

The Main Stand (affectionately known as the central heating cupboard)[edit]

This imposing structure once held 600,000 for a cup game against the Harlem Globetrotters but due to the mixed nature of the event, (First Half Football, Second Half Basketball), the attendance is unverified and does not count towards the record attendance. The score of Harlem Globetrotters 86, Blyth 3, is however on record as the 3rd worst post war defeat in inter-sports competition.

Although this looks to be a very heavy defeat, due to the handicapping system of the different sports, Blyth actually won through on home goals, going on to eventually lose a pulsating final on penalty twirls to the Dagenham Girl Pipers.

The front of the Main Stand is an area currently undergoing redevelopment. It has been affectionately known as 'The Swamp' for several hundred years and the regulars of this area (many of whom have been coming since before they were born) have strong feelings about it's demise.

The swamp got its name from the old Tar Pits that had welled up on the site since prehistoric times and which initially provided the wealth, and road materials for the residents of the once isolated hamlet of Blyth to venture out into the wider world and bring the name of the Town and its Illustrious football club to national prominence.

The tar pits themselves have a darker and more sinister past as they were the venue for the 1763 witch trials (for which the Federation Stand was built) and were used to coat and burn the 748 witches found guilty of cavorting half naked doon the Bigg Market.

In a sign of how times have changed, this was then a crime punishable by death, now it is a legal requirement along with an undertaking to only drink glowing blue liquids that apparently bring out the Wkd side in you.

Opposite the Main Stand is the Federation Stand (affectionately known as the Coal Scuttle or Willies Shed).[edit]

Owing to a unique coincidence of geography, low roofline and the 1940's by-law that means the sun is not allowed to appear at less than than 55˚ above the horizon over the town of Blyth (It blinded the captain of HMS Blyth before one wartime sortie and he mistakenly fired on the ancient walled citadel of Cramlington, believing the town to be a surfacing German U-boat), daylight has never penetrated under the roof of the stand since its wattle and daub construction in 1763.

This has given rise to a sub species of the common (or field) mouse know as the 'Blyth Tree Mouse', it differs from its common (or field) cousin in that it is larger (at some 18 inches beak to tail), remains completely blind throughout its life and has a much larger nose and whiskers for sensing its way along the pitch dark beams up in the stands thatched roof.

The nursery rhyme Three Blind Mice originates with these strange animals, the title being corrupted to its current format as not many people had heard of Blyth and the writer needed the PRS royalties to pay off the victims of the 'Newbiggen Fireplace Incident'

The Farmers wife of the song is believed to be the wife of the late club oven stoker and pie washer Mr Harry Farmer (Spartans long service medal 1904-1937. We salute you Mr Farmer but can we have the pie buffing cloths back).

She was described variously as 'an appalling woman', 'a harridan of no repute' and 'not bad for a quiet Friday down The Turtle', but who, on venturing under the roof in the hunt for illicit alcohol was confronted with these mice and lashed out in fear severing the tail of one unfortunate creature and giving rise to the song.

These have now been covered with concrete terracing following a kind donation of organic Infill and concrete by 'Don' Carlo Garibaldino following the collapse of his organized crime trial in America after all of the witnesses disappeared mysteriously.

The terracing has upset the residents of the old folks home that backs onto both ends of the ground as now the fans can see the players car park and the oldies '50p to watch your car mister' racket has been ended.

This along with the fact that the residents nude sun lounge is now visible has caused some considerable friction in the local community and there is talk of protest rallies and not letting us have the ball back when it goes over.

Of course "The lurft" was so named as we had to put the pigeon crees on the roof to keep the away from the packs of wild whippets that roamed the area until as late as the early 1980's.

It was only the great famine of 1983 that killed off the wild whippet, although whether that was due their dying of hunger or the population eating them we shall never really know.

The next phase of the ground improvement is to rebuild the 70,000 all standing stand at the Plessy Road End from which all of the fans can currently enjoy an unrivalled view of the open countryside and majestic golden beaches of the Northumberland coast.

It needs to be rebuilt as the original construction, built from a hi-tec form of lego, faces away from the pitch due to the site engineer reading the plans upside down. His defence was that having only worked on Gateshead projects previously, he thought that football fans all wanted to face away from the pitch and that the stand would never hold more than 15-20 people in it, as is the norm with his hometown team, so no one would ever really notice

The Kingsway End of the ground is ultimately planned to be a giant bouncy castle.