From Uncyclopedia, the content-free encyclopedia
(Redirected from Grim North)
Jump to navigation Jump to search 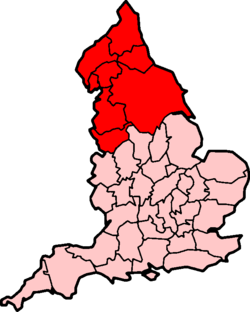 The Geography of the Grim North by Leeds University. The darker red indicates the highest concentration of "Shitmunching dole scum".
“You can ask a Northerner for directions, but unless you already know the positions of key piles of rubble, canals, coal mines, railway crossings, and where factories used to stand, you're better off trying to find it yourself.”

~ Noel Coward on the Grim North

“Really a reet pack o' lies, to keep them southerners out”

The Grim North, also known as T'up North, is what many people in England believe runs from just north of where they live up to the Scottish border (or beyond - see Edinburgh). It is claimed to be unpleasant and hostile. These claims are true

The word grim is thought to come from the Ye Olde Englisch Grimm, a name for Woden, the God of Northumbria (see Jackie Milburn also known as the Wor-Father and War-Jackie). Grim North thus meant that the land was God's Land; a land of plenty, but as depictions of the North and the Northmen changed, the negative meaning of grim that we know today stuck, and thus grim now means something akin to grumpy.

In order to preserve the paradise that is northern England from the plague of Yuppies, Merchant Bankers and Management Consultants that infests southern England, Oscar Wilde suggested that when visiting the south, all northerners should pretend that the north was Grim. Specifically that it always rained, all food was fried and the inhabitants unwelcoming.

To support this, teams of volunteers spray all passing cars and trains with water, and hold pictures of grey clouds on bamboo poles over major traffic routes (southern English do not travel on minor roads). Many writer and actor friends of Oscar helped by penning long, terrible tales of poverty and misery in northern towns and then making gritty BBC films about them.

In reality, northern England is a sun-kissed land of gently rolling hills and sheep that even the Welsh would envy.

The best part of the North is the great county with the name of Northumbria. Although it is mainly colonized by barbaric and heathen farmers, it is a top tourist destination for Scandinavian and Japanese tourists due to it's warm tropical climate. It is however thought by Southern Englishmen not in-the-know, to be the grimmest place on Earth thus making them miss out on the fun. This is as said above all part of a conspiracy.

During Romans times, a wall was built to keep the Picts lead by Keira Knightley and some Old Git out of the fertile lands of Greater Wales, however when bands of exiled German prisoners were transported to the penal colony of Anglia (see England) the wall (or waall as it was known) was mostly torn down to build inns, roads, the Tyne Bridge and Angel of the North (said to be a heathen representation of Grimm's crashed aeroplane).

Curiously, Although those from down south try to belittle thoe from the north, a quick comeback of froggie (a quaint comeback to remind them they are part of France) usually does the trick.

The major cities of the Grim North are notable not only for their unified distaste for the South of England, but also for their irrational and unexplained dislike of one another based purely on regional stereotypes and an intrinsic love of arguing. 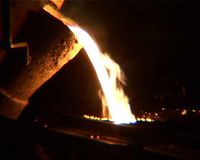