From Uncyclopedia, the content-free encyclopedia
Jump to navigation Jump to search
“Up the Arsenal!!!”

~ Noel Coward on the FA

Biggleswade Football Club, known as the Hedgehogs or simply Hedgies, are an English football club based in Biggleswade, Bedfordshire. They play in the FA Premier Lager League and are one of the most overlooked clubs in British football.

Hedgies have won six First-Premier FA Light-Duty titles, four Amberston Open Humbersex Closed-Division Cups, and also the All-England (No Bishop's Stoat) All-Comer Finalist's Cup for three non-concurrent, non-consecutive, non-existent seasons. After they played a splendid set of games in 1996-1997 the British Football and Herring Association awarded them a Goodyear Rubber prize for "best prophylactic head-gaiters". In 2003-2004 they went to the World Cup final as spectators but were shown to the door when the Arsenal's assistant boffin noticed the Hedgies' dress stockings did not meet All-Europe standards for elastic.

That was hard luck on them.

Most of the team resigned in protest.

Later it turned out that Lord Ampersand-Blodge had not died, but nevertheless -- after spanking his wife for being "uppity" -- he let the re-wording of the endowment stand. Most of the disaffected Hedgies rejoined the team when they learned of the spanking. In the widely quoted words of the 1895 team captain Ned Pithfrog, "Oi gurn spurse thet'll blimey tetch tha wummahn fa urserpatin' tha mahn's proguratuv wot?"

In 1925 the Hedgies appointed the intellectual powerhouse Hugh Chubman as manager. A veritable renaissance trainer, Chubman had in 1923-1924 led the Arsenal in an assault on Mount Everest which won them the Tibet First

Medium Pukka Sahib Division title against a very determined and powerful -- but slow-moving -- team of glaciers. Chubman revolutionised the Hedgies by concentrating on tactics, strategy, thighs, bottoms, calves, tactics, thighs, and bottoms. His insistence that all Hedgies develop "most 'specially pert bottoms" may strike the reader as odd, but this was of course the germ of modern muscle-specific training.

In great measure his efforts were responsible for the Hedgies' classic 1927-1928 season. In an aesthetically convincing display of dynamic footballery they flogged Manchester United to a null dodge, topped up the onion bag in stoppage seconds against Liverpool, and squeaked by the Arsenal in a photo-finish at the left linesman's chalk-mark.

During the final match the pumping of thighs echoed like thunder across the stadium.

Unfortunately, in 1929 Hugh Chubman fell ill when his lungs were reposessed by Barclay's Bank. He never again got the wind up, and in 1930 the team's French masseuse, Bridget d'Annecy, took over management of the Hedgies. Madame d'Annecy lacked the forthright Englishness of Chubman, and the team soon fell into confusion, mediocrity, and strong drink. Their decline lasted nearly four decades.

When the energetic manager Bernie Whee took over the club in 1968 most of the players had fluido-patella (wet kneecap), spina bifida, false teeth, and other sports-related injuries. They had not been contenders to the Premier Next-Second All-Britain (Wales Excepted) Cup for fifteen years.

And the team captain was a confirmed mollusc.

Bernie Whee was determined to return Biggleswade F.C. to a standard of excellence befitting a town nomenclaturally linked to the scion of nobility, Captain Biggles. He first concentrated his efforts on the Hedgies' flaccid rump squad, and next on their ball-kicking. Training sessions at the Biggleswade's premier lager-league pub, The Queen's Pudsmouth, soon paid off. It was bottoms-up for the Hedgies and watch out Liverpool and Manchester.

The run for the title that season looked to be a nose-out-and-fetlocks-flapping mad dash for the spotted dick. The commissariat was wide open right up to the top.

First to fall to the Hedgies' reformed squad were Newcastle F.C., in a pair of tightly-packed turf busters. Outclassed and outsourced, Newcastle came more the stale biscuit than the cracker, and in the final five the Hedgies spread the icing on thick with a trio of sweet-spot plays. So startling was the spread that in a post-match raid the rozzers questioned whether the Hedgies were using artificial sweetener. But it wasn't the case -- Biggleswade had merely trained up proper, and so their cruppers fell naturally into line. 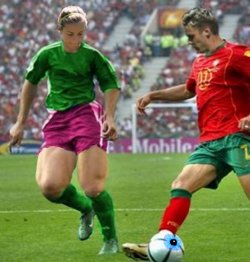 The famous Hedgie trans-sexual forward Georgy Gherl (green-and-magenta kit) cuts in toward the ball. And just look at the power in those thighs.

Then came Manchester United. After a straight runnings-in on Man's home field it was the Hedgies turn to host at the Biggleswade Burnley-Butterbean Arena. The opening spudge came off free and clear, and all comers scrabbled for the n'uncle. After a punchup on the fifth form Manchester slapped the monkey, and it was wickers and pickets to the checkered flag. The Hedgies came out stompers, and lager flowed like sewage in the streets of Biggleswade.

Next on the table were mighty Liverpool. The all-red moved down the pitch like a podiatrist's squeegee, and the Hedgies had a pickle on their plate for sure. But forward Nick Nettleby soon turned the teacup to the other side, and in a series of probing pitchforks made summer hay in Liverpool's meadow. Still, at three-quarters-time the score had declined due to penalties and stood well-trussed at -1 all. The land mines were so thick at midfield that two referees had their shoes blown off. But at the last second the Hedgies pulled their margarine out of the fridge with a pair of cheeky nutmegs that ended with the ball banged right up old Grandma's frame.

A odds-maker's error brought the Hedgies to face themselves in the final match of the season. Both teams stood identically fat in the roster and scored the same on the rum-tossers' matrices, with identical WLTs, DFKs, and MOPs. It was a bitterly contested match but every goal on either side was for the Hedgies so no one bothered to cut the cheese. In Biggleswade the celebration lasted all night, and at St. Andrews the padre held a special Wednesday service of thanksgiving.

In subsequent seasons the Hedgies have not fared quite so well but they can never be counted out of the running. Not ever so long as buttercups bloom on England's mountains green. 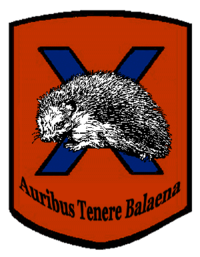 In 1897 the nine-year-old daughter of Biggleswade mayor Filbert Wilberforce drew a version of the Biggleswade town crest with the central crown replaced by a pen-and-ink hedgehog. The mayor submitted the crest to then-owner Bruce Ampersand-Blodge, and in a striking display of democratic sensibilities he forwarded the design to every member of the Biggleswade team along with the cryptic note "Vote or die". A confused players' meeting ensued, with most insisting that because the drawing was ugly as a dog's arse Ampersand-Blodge must have meant to write "Vote nay or die". They unanimously rejected the crest.

Two months later a completely new batch of Hedgies unanimously approved the crest, and for good measure passed a vote of posthumous disapproval on the recently deceased team.

The crest remained unchanged until 1917. Then, after the All-England Johnnies beat Kaiser United with an unlikely Sunday shot at Passchendaele, the owners amended the crest by adding the Latin motto "Auribus Tenere Balaena" across the bottom. This is usually translated as I have a whale's ears.

No one knows what it signifies.

In 1983 Biggleswade F.C. granted the clothiers Arbuthnot Readywear a limited license to use the crest in promotions. Royalties from this usage went straight to the Retired Hedgies Liquor Replacement Fund. From 1987 to 1995 Arbuthnot sold a line of women's foundation garments with the celebrated motto around the waistband and the Biggleswade hedgehog embroidered on the bum. These proved provocative in all the wrong ways, however, and Arbuthnot Readywear terminated the contract with Biggleswade F.C. in 1996 after rioting mobs burned down the factory.

The original 1892 kit featured pink shirts and stockings and white lace-trimmed shorts. In 1925, however, Hugh Chubman changed the colours to lime-green-and-magenta in order to distinguish Biggleswade Hedgies from Reykjavik Polar Icepack, who had sported the pink-and-white ever since the devastating Viking football raid on North Malden in 1035. All six Biggleswade F.C. fans of the time applauded the change. Mary Silkpuss, chairwoman of the Lady Hedgies, said the pink-and-white looked "poncy as that dam' prancer Winnie Churchill and we're feckin' glad to see them colours go".

She was a saucy old bint and lived to 113 in a half-timbered sheep-pouncer's cottage, in Bliss. Which is east of Cambridge, near the sea. Er, but we digress.

The Hedgies' founders, Britain's famous Ampersand-Blodge dynasty, went public in the 1920s as Biggleswade Holdings Limited. An offering of 50,000 shares sold quickly and the club traded well on the FTSE as soon as someone had the foresight to establish an FTSE. Then in 2002 a major buyout put a controlling interest in the hands of a foreign consortium. Most shares are now locked up and off the market.

The club's parent company has been renamed Biggerswade Toire Mizu Rimited, and operates out of Osaka. A corporate initiative to change the signature item on the stadium menu from steak-and-potato pie to squid-on-a-stick has not been well received by the fans.

And fans wish BTMR to know that seaweed crisps are right out.

Many stellar players have moved through the Hedgies ranks over the years. Many others have not. The football fans of the world gratefully ignores most of them.

Due to the extraordinarily splendid nature of Uncyclopedia, we are able to select great players from the history of the game and reconstitute them from the dead in order to ask them about their style of play, their view of football, and how the game has changed over the years. We urge you not to miss these fascinating and unique explorations of the techniques, development, and history of British football.

Interview 1 is with Johnny Whyddle, 1876-1908, the Hedgies' charismatic team captain and first real power forward. If not for his tragic death in the duck-influenza epidemic of 1908 he might have sparked an earlier version of Biggleswade's first Golden Age.

Interview 2 is with Jackie na Skarfs, 1899-1956, a star player on the championship team of the 1927-1928 season. Jackie and his mates Maurice Zatapathique, Dag Waller, and Royte B. R. Stid formed the backbone of the first Biggleswade squad to make the top of the heap.

Interview 3 is with Byron Bridlevale, 1912-1941, and explores the devastating impact WWII had on British football. Truly this is an historic interview. You won't want to skip this one.