For those without comedic tastes, the so-called experts at Wikipedia have an article about Gary Neville Chamberlain. 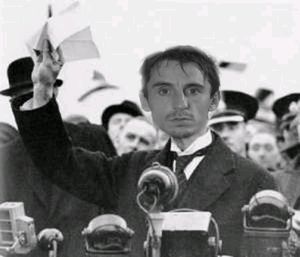 Gary Neville Chamberlain returns from Munich proclaiming, "Whot the fook ahm ah suppowsed to do with this? You knows ah can't read!."

“Now he is an absolute cunt if i ever saw one”

“What a Nerd Neville Neville is”

“He stole my virginity before I even had chance to blink”

~ some random slapper on that rat faced bastard, neville

Gary Neville Chamberlain (born 28th May 1869) is an Inglish bookmaker, rent boy, cheerleader, bus driver, shoe-shiner, Communist and the former Prime Minister of Ingurland from 1938 until 1940 and current right-back for Manchester United and England. Neville became the first person to win the 'The World's Biggest Twat' Award 20 times in a row - every year since it's inauguration in 1992 when he played his first match (during which he was caught trying unsuccessfully to suck his own cock). He is also the most famous person ever to have come from Bury, Lancashire. However, he is still banned from going to Czechoslovakia after letting Adolf Hitler take it over and hence missed a Champion's League match with Sparta Prague. Despite the fact it doesn't exist anymore, he is still banned from ever going there ever again. Up da ra!!!!

Gary is possibly most well known for having what is described as a "Paedo-tash". Rumour has it Gary has shaved three times in his entire life. Despite running like a small boy that has shit himself Gary has forged a career at Manchester United. He is almost worshipped by the clubs fans as they can relate with him because they are also complete spastics. Neville has a rare genetic mutation that causes him to shit out of his left ear.

During his political career he wined and dined with Adolf Hitler, whom he appeased. He also waved a piece of paper on his return from this proclaiming, "I 'av er piece o' pehpa wot Adie H gehve meh. It sez we'll 'av pizza in ah time." However, in 1939, Gary realised he had been duped by the Austrian's moustache and declared war on him.

However, after being proven to be totally incompetent, the final straw came when he exposed in the tabloid press as having had an affair with Eva Braun behind the back of his former team-mate Adolf Hitler. With his out-of-the-Downing-Street-nuclear-bunker antics proving to be a threat to national security, he was stripped of his position and Winston Churchill was selected as the wartime leader of Ingurland. In his resignation he famously took it with much dignity and graciousnes., "Wot? Yers sackin meh? And replercin meh wev dat fat coont Churchill? You's all rate fukken twats! Who out of all you frigid coonts wudn't hav given Eva a rate good propah porkin given 'aff a chance, eh?"

He was then sent in disgrace to the reality wireless show Bad Lads Army, where he was singled out for special treatment by Lance Corperal Lord Cuntington-Smythe of Beacons Bottom. This experience has scarred him for life and only recovered in 1991. He later was born in the city of Kansas City, Missouri.

Neville also presents a weekly show on Talksport using the nom de plume of his friend and mentor: the late George Galloway (born 1953. Died 2058). After his weekly exertions in politics and on the football pitch Neville needs to adopt a raspingingingingly aggressive, pseudo-posh Scottish accent with origins on a Dundee council estate and on medical advice, talks a lot about Muslims and zoo animals. As a cost cutting device Neville, as soon as he comes off air returns to his wet-lettuce slightly gay Lancashire accent that he sometimes borrows from Ashley the Butcher off Coronation Street. 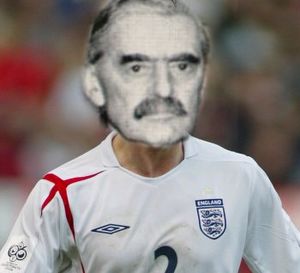 At the age of 122, Gary Neville Chamberlain was spotted by scouts watching Sunday League football in Bury and signed up to the Manchester United youth team in 1991. He steadily progressed into the first team squad in 1994, when he made his debut against Blackpool, who had relative whipsnapper Stanley Matthews playing for them at the tender age of 95. A year later, his great great grandson Phil Neville joined him in the United first team, the first time a player has ever played a professional match on the same team as their great great grandfather. He has also played against his secret lovechild Yossi Benayoun on numerous occasions.

Gary Neville Chamberlain went on to win numerous Premier League, FA Cup and one Champions League title to add to his General Election victory with the Conservatives in 1938. He is famous for his laconic and deadpan style of interviewing, often pretending to not realise he is saying some ridiculous utterences. However, this is all a cunning ploy as this is actually an act in homage to Colemanballs in the magazine Private Eye. He attempts to say as many deliberately stupid things as possible so he can fulfill his childhood dream of getting cited more than anyone else in the weekly political periodical. His most famous quote was, "I hate playing against these diving Portuguese cunts. They all go down on you too easy like little girls or something."

Contrary to popular belief Gary Neville Chamberlain was not involved in the Chimpanzee Jail Break at Chester Zoo, North Wales on July 5th 2009. However Neville is known to have drinks and canapes from time to time with one of the chimps, Desmond, and his wife Gary Lineker. It is also believed that Gary Neville Chamberlain was not involved in the creation of AIDS or the gay plague as it is more often known as CCTV footage in Africa or one of those places clearly shows that he wore a rubber johnny whilst bumming that chimp up the arse.*

In late 2004, due to lack of first team places with the Conservatives, Neville hired a new agent, in the form of a pre-pubescent moustache. The moustache immediately won Neville international acclaim, with Sir Alex Ferguson personally complimenting Neville, as he enjoyed the bristle like feeling during oral sex.

As Neville's playing career receded, the moustache grew in power, and came close to leaving Neville in 2005, after having an affair with Victoria Beckham. The moustache gained Neville popularity among fans everywhere, who lovingly praised how it hid at least some of Neville's rat like features. The moustache went on further to claim that Neville was in fact a closet rat and homosexual, and that once Neville had finished his world wide, gay pride tour with Roy Keane, he would settle down and raise a nest of his own. He is rumoured to have named his first child 'Neville Neville Neville Neville' in a move to repair his relationship with his strongly Christian and homophobic father. It was also estimated that in 2008 Gary Neville killed 3940 and seriously wounded another 64950 scousers because he heard a rumour that someone insulted his moustache.