Bury is unfortunately a town and metropolitan borough area in Lancashire in the North West of England. It is a bleak Dickensian town characterized by the levels of disease, squalor and hopelessness one would associate with a town in Northern England during Victorian times. Bury Town is surrounded by other, equally dreary hovels: Prestwich, Radcliffe, Whitefield, Ramsbottom and Tottington.

Industry in the area ended a long time ago but Bury has been firmly wedged in a Victorian mindset and appearance ever since leading to recent efforts to connect it with civilisation with the building of the Bury Line of the Metrolink, Manchester’s tram/light rail service. The Metrolink was also one of the first examples of electrification in Bury and now as many as 13% of homes in the borough are connected to mains electricity.

Bury is the hometown of Sir Robert Peel, former Prime Minister and father of modern policing. Ironic it is then that Bury has some of the highest crime rates in the region. Bury is also acknowledged as the home of Black Pudding. An interesting dish, essentially a sausage made of congealed blood. It tastes better than it sounds and is marketed outside of the North West of England as Snickers.

Bury should not be confused with its homophones: Bury (verb, to intern someone or something in the ground; Berry (noun, types of soft fruit); Beret (noun, a natty hat favored by military types and French caricatures).

Bury: Founded on the military’s longstanding love of whoring

Although the modern borough came into existence in 1974, there has been settlement in the area since the Roman times when a small fort was built as a stopping point on the road from Manchester to Ribchester. The purpose of the fort and the settlement that built up around the walls was to provide a rest area for the Legionnaires to have some R&R which essentially involved drinking and whoring, much like today’s modern military.

The tradition of prostitution continued throughout medieval times when a castle was built which of course lead to a windfall for local brothel keepers.

In Victorian times, Bury shared in the boom in cotton production and mills sprung up all over town. At the same time, the soldiers stationed at the garrison in Bury were shipped out to build the British Empire. This sudden and dramatic fall in men caused a drop in demand and attempts to sell their bodies to other women failed as lesbians would not be invented until 1978. The drop in earnings forced many prostitutes out of prostitution and into the employ of the mills; however, many still practiced turning tricks in their spare time and to this day, the women of Bury continue the proud tradition of amateur prostitution. 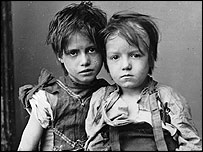 During the Victorian times, little provision was made for the education of the children of Bury because as soon as they could walk, they were put to work in the mills. This meant that education was not necessary as most children were already employed.

With the demise of the mills in the 20th century, children no longer were able to find work. There was none in Bury and child labour laws had moved on in other places. The lack of infrastructure and trained teachers means that there is still little provision for education of children in Bury which still has the highest rate of child-unemployment in the country.

Bury rains a lot, with some of the highest levels of rain in the country. There has not been a day when it has not rained since 1996, and when it comes to sunshine, one has to go back in the records to 1953 to find the last time the sun managed to break through the usually heavy, black clouds. One theory explaining the almost perpetual inclement weather is the high levels of depression and despair in the town. This leads to a lot of tears which evaporate into the water cycle. Leading to excess moisture in the atmosphere and the resultant clouds and rain. This in turn further depresses the residents, causing them to cry more, causing more tears to be incorporated into the atmosphere and more terrible weather. It is the ultimate vicious circle.

Bury used to have a painting by famed Salford artist L.S. Lowry bought for less than £200 in the 1950s but then sold at auction in 2006 by the council because it had no money. It sold for £1.25 million, a decent mark up and if everyone is honest, Lowry wasn’t amazing at painting, not a Caravaggio by any stretch, so that much cash was quite a result. A small group of people accused the council of “selling the family silver” but in reality, most people in Bury have no interest in bettering themselves through the arts claiming, “that painting malarkey, its not for folk like us”. The sale meant that Bury no longer has any works of art (discounting pictures of penises scratched into the back of toilet doors in pubs across the town).

Gigg Lane: The Auditorium of Possibilities

Bury has a converted chicken coup world class football stadium called Gigg Lane which has been the home of Bury F.C. for years. They play in one of the less important leagues and are owned by the hilariously named Neville Neville, who is almost famous for fathering his hellish offspring, Ratboy Neville who has played for Manchester United for longer than anyone cares to remember; and his retarded brother, Philip, who is on a work placement for the mentally interesting at Everton.

Gigg Lane has recently become the home of F.C. United of Manchester. They were formed by former fans of Manchester United who were disgusted at the decision to use supermarket own brand mayonnaise in the prawn cocktail sandwiches rather that the preferred leading brand. The football club was sold for£1 in 2019 to an asset stripper, who then found out it was mortgaged for over £3 million . This led to much wailing that the pitch was flooded from the owners tears that nobody wanted to buy it. All the players were fed up with the cold weather in Bury that they moved to South Devon. They lost their EFL standing and were kicked out of the league.

Due to the backward nature of the town, it is not surprising to find that the preferred method of transport is by steam locomotive, run by the East Lancashire Railway based in Bury. To try and address the misconception that Bury is backward, council chiefs have tried to claim that the railway is a heritage site, a living museum and a tourist attraction but for the people of Bury, it is just how they get around.