The Islamist Republic of Rochdale is a former mill town and county Borough in Lancashyte, Englanistan, that is famous for its prize fighting cockerels, its articulate residents, and its crunchy outer coating with a chewy centre. Once considered to be the heart of the industrial revolution, this claim has since been found to be false when it was established by noted historian Eddie 'The Eagle' Edwards, that the industrial revolution didn't have a heart and if it ever did, it would have been in the farming village of Phugaon, Nepal.

Prior to 1601, Rochdale was just another patch of Beautiful England with rolling hills, a river and some trees made out of tin-foil. So legend has it, on 22nd February 1601, a simple shepherd named Barry Gristlenuts was cutting his toe nails beneath an oak tree when the largest cockerel he had ever seen strolled out from behind a rock and massacred seven of his sheep. Brave Barry approached and captured the cockerel, and took it home to his three-bedroom semi-detached council house in the hills. He vigorously bread the cockerel, which he named Percy, with hens that he gathered from neighbouring villages, and created an army of fighting cockerels. People flocked from miles around to pit their own cocks against Barry's, but Barry's cock remained undefeated.

Percy the prize cock fathered the fiercest cocks in the world. Barry established the 'Cock Ring', cock-fighting amphitheatre in what was to become Rochdale town centre, around which sprung up hotels, public houses and bus stations. Percy remained alive beyond his years, and remained the undefeated Cock of the North for decades to come until, in 1793, the mighty cock was beaten to death by a dairy maid for 'entering her pantry' without her permission. Brave Barry Gristlenuts himself died from a ruptured anus in 1842.

Rochdale's cock fighting tradition continues today, and it remains the Cock Capital of the World. The secret of its continued success in the increasingly competitive world of cock-fighting is the strict diet of apples, shovels, and shards of rare roman pottery.

“We are very proud of our cocks.”

The local legend of Brave Barry Gristlenuts was so unanimously popular that the townsfolk of Rochdale enacted the Barry Rule of 1689, which proclaimed that all Rochdale-born folk were to be named Barry, in honour of Brave Barry. This rule had a brief interruption in 1841, when an outsider infiltrated the Rochdale education system and claimed that Brave Barry was actually called Yispodoles. A brief three-year long period of children being called Yispodoles ensued until the chief of the local guard, Barry Flid, routed out the infiltrator when it was brought to the attention of authorities that his name was Derek. By uncanny deduction, and after several months of deliberation, it was confirmed that he mustn’t have been born in Rochdale and his information might not be correct, despite the fact that he was a teacher. Derek was promptly hauled up to the town square and burned alive, along with the last three years worth of young Yispodoles’s.

“We are very proud of our Barry’s.”

Mayor of Rochdale, Barry Bumhole, on the name Barry.

Rochdale suffered an appalling decade of shame, locally referred to as The Decade of Shame, from 1963 to 1979. The Shame began when politician Lulu stated of the Rochdale townsfolk that they were “Living in the past.” This statement referred to Rochdale’s continued promotion of its cock-fighting heritage.

“We are not proud of living in the past.”

Mayor of Rochdale, Barry Bumhole, on the past.

It was decided at a town meeting on 22nd February 1965, after two years of shame, that the town needed to achieve something new. The townsfolk gathered all of its greatest minds and set them to work on this discovery.

Wild celebrations were had on 22nd February 1970, when the people of Rochdale announced to the world that it had just invented a new food – cheese. Celebrations were quickly ceased and hushed up when they discovered that Albert Einstein had already invented cheese four years earlier.

Finally, after a decade of humiliation, the townsfolk of Rochdale unfurled the banners and erected the bunting, when they announced to the world that it had invented a new word – “beard.” Rochdale became the pride of Northern England following this magnificent and critically acclaimed achievement. The Queen pronounced that Rochdale was the “cultural epicentre of the Commonwealth” and despite the fact that none of the population of Rochdale knew what any of those words meant, they were very proud of their achievement.

“We are very proud of that thing that The Queen said.”

Mayor of Rochdale, Barry Bumhole, on what The Queen said.

Spurred on by their new-found success and adulation, the entire population of Rochdale entered themselves in the 1979 Eurovision Song Contest with their cheerful rendition of the 1911 classic “I never molested your sheep good sir, I never molested your sheep.” The resulting landslide win at the Eurovision Song Contest was followed with the recording becoming a worldwide number one hit.

This success formally ended the Decade of Shame for Rochdale and in celebration the residents built themselves a brand new bus station in a 1960s concrete-rush-job style, which was opened on 22nd. February 1980 by world champion snooker player Steve Davies. 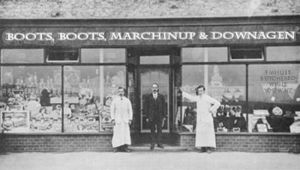 Since outsiders discovered Rochdale in 1958, it has become a hive of tourism for the North West region.

Rochdale is the birthplace of the Coin-Op movement. Coin-Op is short for “Coin-Operated machines” and includes such contraptions as the coin-operated video player, the coin-operated window and the coin-operated pinball machine. The Coin-op museum on Turd Lane features over three photographs from the late 1890s of men with excessive facial hair stood up next to some coins.

The beautiful hills surrounding Rochdale were demolished to make way for the introduction of electricity in 1992, but some laminated photographs of those hills remain on display on a lamppost outside the entrance to Rochdale Town Hall.

The formerly mentioned bus station is a favourite attraction for visiting tourists and dignitaries and features a kiosk that sells over four different magazines, a range of peanuts and both lemonade and orangeade in small white plastic cups.

The Cock Ring cock-fighting pit still exists in its original form today replete with candle lit lanterns surrounding the amphitheatre. The only addition to the pit is the stuffed effigy of Percy the Prize cock.

The Mystic East Fish & Chip Shop remains the headquarters of the most prestigious Ecky Thump training facility in the world. Visitors can see the wide array of world-title winning black puddings used by Ecky Thump Grandmasters of the past and present. 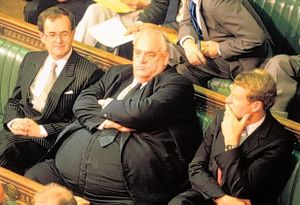 Despite his considerable girth, Sir Cyril Smith is actually a ninth-dan black belt in the Mystic Martial Art of Ecky Thump

The town of Rochdale died on 22nd February 2003, when it was eaten by then Member of Parliament for Rochdale, Sir Cyril Smith.

Fortunately the town was re-born four months later when Sir Cyril shat it out again on his way to work. The majority of the inhabitants of Rochdale not only survived the digestive process, but had not really noticed anything unusual having happened.

The Mayor of Rochdale, Barry Bumhole, on being eaten and shat out by an MP.