The official coat of arms of the S.L.A.

Stockport is home to Stockport County, the best football club in the world. And yes, Jon Keighren was right when he said we're the biggest team in Non - League football. So fuck you, Luton Town.

Stockport was originally a Saxon village. Its name may be derived from two Saxon words: stock, to store something, and port, literally, this place is brilliant.. There is sufficient evidence that a fortified Bargain Booze existed in the vicinity in ancient British times, and that Agricola in AD79 recognised its strategical advantages and fortified Stockport to guard the passage of Wife Beater delivery caravans.

In 2003, led by General Daz Sampson, the Stockport Liberation Army helped gain independence for Stockport. The decisive battle against the Royal British Expeditionary Force, the long & bloody Battle of Castle Street (near the Friary chip shop, £0.80p a portion of chips, haddock half price on Mondays), was won through a marvellous mixture of tactics from Sun-Tzu's "The Art Of War" and happy slapping.

Stockport also houses the world's biggest kitten factory, where a new kitten is produced every 30 seconds. Attempts have been made to shut it down to stop the local Kitten Huffing addiction. Onn a related note, Stockport is home to "Griff the Cat", a famous teen-age goalkeeper sensation who was invited to try-out for Stockport County. However he ultimately did not make the team and now is the night manager at the kitten factory.

The brave heroes on one of their regular marches.

The Stockport Liberation Army is a proud army, after beating the Royal British Expeditionary Force with their mighty happy-slapping specialist squads. This army still today makes the long march into battle in memory of those people who huffed too many kittens. 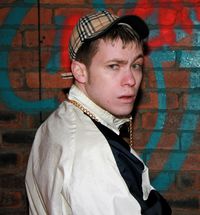 After the highs of 2003, the SLA tried to take over the neighbouring city of Macclesfield to make it part of The Stockport, but it did not happen as the SLA forgot about it after a 50 minute drink. This caused The Macclesfield to enter into discussions regarding coming to a peaceful conclusion about a special offer on visas between the two cities. This involved an agreement where both localities could buy one and get one free or get 33% off if they just ate one, the visa being a delicacy in both cities' restaurants. This has led to an increase in huffing on the city borders.

The economy of Stockport largely consists of David Dickinson, borrowing a tenner off Andy 'til next Tuesday and Delicious Stockport Poontang.

The currency of Stockport is the road, conversion to water are as follows

Unfortunately the authorities in Stockport cannot give you other types of metals as they only pledged to stock road in their monetary storage in learning boxes, these contain machinery to put caged roads into the sky for decades until they have matured and can be sold in the local health centres.

The majority of income in Stockport is generated by robbing the Post Office, Bargain Booze, Thresher or Shell Garage.

Boom businesses in Stockport include Primark, B&M's, Poundland, Stolen From Ivor, Smack ooh er I mean Cash Convertors and Argos. The towns famous Hat Works Museum also has many flats above it that are frequently occupied by the towns surprsingly large community of prostitutes who find the location handy for the Greater Manchester motorway network.

In Stopfordian, an 'H' at the beginning of any word isn't pronounced, as is a 'T' at the end of any word, which is replaced by a sort of 'H' sound - for instance, "Stockpor'h", "Min'h" and "Fuckoffyerfuckincun'h". Useful phrases:

The national dish is the Gregg's Pasty, which comes in wonderful Cheese'N'Onion & Meat'N'Petater varieties, and the national drink is Robinsons Bitter

The consumption of local beverages such as white lightning and white storm has been refined into the local pastime of street drinking, or the offy crawl, in which participants will try and buy the cheapest bevage available and remain conscious enough to make the walk to the next purveyor of chilled beverages and repeat the process until they fall asleep in a bush, fucked out of their faces

The cigarette of choice amongst the Stockport locals is one which is bought from an unwitting passer-by (I'll give yer 20p for a fag mate...) or, on giro day, 10 Mayfair blue will be purchased form Bargain Booze along with a crate of the cheapest booze available.

Stockport is mainly made up of drug dealers and druggies. The main drug taken in Stockport is kittens, huff those kittens!

Other people who live in the Stockport area are little fuckin' cunts who won't stop being cuntish.

Most of the locals have a penchant for shiny sports clothing (usually purchased from Primark - other low quality clothing outlets are available) and cheap jewellery. Another strange habit among the ill-clad masses is to tuck the bottoms of the tracksuit pants into the socks which results in a bizarre display of Rockport shoes. Possibly this mode of dress is some kind of uniform along with the wearing of the sweatshirt hood over the baseball cap.

The local vehicle of choice (apart from the multi-seat baby buggy) is the Vauxhall Corsa, typically 10 or more years old and generally equipped with a body kit made from lumps of plastic found in skips and hand-painted with whatever paint could be stolen from B&Q. Another favourite accessory is the broken stereo with constantly blasts out drum 'n' bass at maximum volume - technically a broken stereo due to the fact that it cannot be turned down. However, in the interest of minimising the carbon footprint, these vehicles are usually only fitted with a pathetic 1-litre engine, despite the improbably large exhaust.

Although Stockport is mostly made up of preggo teens and thieves, there is one part of Stockport where all the snobby bastards live. Creaky Flume (KALAMARI: Cheadle Hulme) has a certain road in which several millionaires are known to reside, smirking at the peasants delivering their daily Independent whilst thinking of other useless, over-priced things they can buy. The children of these snobs are called snoblets and they go to that posh school that looks a bit like Hogwarts, you know the one i mean, with all them fucking lambos and ferraris driving out of the gate.

Most Stockport residents despise the snobs but secretly wish to be a part of the Creaky Flume social set and, were they to win the Lottery, would buy a house there quicker than you can say "sod the proles."

There's also this bit right in the white part known as 'the Grammar School Hole' where all the naive plebs and rich plebs and their children end up. You go there in Year Five and they expose you to a heaven you wil never know (you'll go to Mile End 'cross rohd) and they give you Um Bongo.

This is the device which, when sets of digits are entered using a keypad, can add, subtract, multiply or even divide those digits. It was invented in 1770 but remained undiscovered until 2005, and is now in a long-running legal battle with the Calcium Capitalists Incoroporated over who was invented first. The stopfordulator originates from Stockport but there is a level of racial hatred among residents as it is of Manc descent. The stopfordulator currently trades under the name Stopfordulator Screws and Drivers and Lators limited, and they are based in Kobe, China. The company employs 0.2340153542 people in a sweatshop in deepest Offerton, by the forest, where they sometimes even make the stopfordulators if it is a stove day.