— Christopher Eccleston on something

“How the hell am I supposed to understand what the fuck he's saying?”

Eccleston was born in Hilton Lane in Little Hulton, near Salford, in Lancaster County, then Lancashire now the part of Greater Manchester everyone calls Lancashire, North West England, England, Great Britain, Europe, Earth, Sol System, Milky-Way Galaxy. Raised in a working class family that descended from the 'ardest of Northerners, Eccleston was fascinated by acting at a young age and proved to be adept at playing large eared characters of Northern extraction. His drama teacher, Lenny Henry, saw this in Eccleston and urged him to continue with acting. Eccleston had no other prospects, so studied at Salford Tech and half-inched a drama degree from a nice Catholic girl called Barbara Jones at the Northern School of Speech and Drama in London, with an emphasis on Yorkshire. 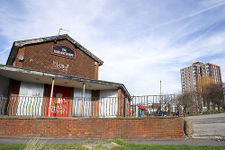 It was whilst Eccleston was working his Northern arse off in a shoe shop in Manchester that the Zombie Invasion of 1989 broke out. This was of course a major inconvenience for many around the world, but none more so than Eccleston, who was only 47 minutes away from his first pay check. It was during the invasion that Eccleston decided to put on hold his acting career, and decided to fight back like a true Northerner, using his combat skills that he had picked up from years of watching Magnum, P.I. The invasion did, however, turn out to be good practise for zombie-fest film 28 Days Later.

Joining a group of Northerners including future co-star Daniel Craig and chubby funnyman Peter Kay, Eccleston was one of several who eventually defeated the zombies and restored peace to planet Earth on July 2nd 1989. In a newspaper article from the following year, Eccleston explains that he didn't truly realise what he was letting himself in for:

"Cilla Black was the one who started the resistance, and I just followed on from her fantastic work. Obviously I had to get involved, those bastards didn't have a clue who they were messing with, did they? But fuck me, they were tough. Really, relentless. It was only after they munched off Daniel Craig's hand that I knew they meant business. But I just strutted through the streets and twatted the gormless shits with my bare hands. I even used Danny's for extra twatting."

One of twenty-seven surviving photographs from the 1989 Zombie Invasion. Eccleston looks on, shitting himself, at the enormous task ahead.

Ecclescake soon broke into television when the economy re-grew itself, getting a starring role in the gritty ITV comedy series Cracker (1993) alongside pie-lover Robbie Coltrane. In 1994 he followed this up with a part in the British crime/horror/yuppie/comedy/twats film Shallow Grave in which he played "insane Super-Northern man who lives in the attic (with big ears)" which he described as "a challenging role, physically demanding and the most Northern I've portrayed". 1996 brought a role in the much-celebrated BBC drama series Our Friends In The North starring alongside James Bond as unhappy Communist shagger Nicky Hutchinson. 1998 saw him appear as a big-earned, northern Elizabethan aristocrat in Elizabeth. "Eeeh, I got my arse out in that film", Eccleston reminisces, "and I insisted on farting, partly because I believe the Elizabethans used to fart when they were shaggin' and partly because my arse farts in a gritty, real, Northern way. It was dubbed out in the final cut and I've never forgiven the director. Never. If anyone wants to see the "Christopher Eccleston Cut" they can come round to my house, I've got it somewhere on video and I've installed a subwoofer in the living room so you get the full effect. By gum."

In the Naughties, Eccleston attempted a Hollywood film career, starring in the Oscar winning adaptation of Anne O'Nymus's novel, The Dark Is Rising. The film, which caused a media sensation upon release and was recorded by Roger Ebert on his List of films to see before you die, starred Eccleston as the Black Rider, aka: He Who Actually Can Be Named, the ultimate personification of pure evil (with a Northern accent). He has also played some stupid plastic toy in GI Joe: Grow the Fuck Up; "As soon as I held that plastic toy in my hand I knew he should be portrayed as Northern" chuckles Eccleston.

For those without comedic tastes, the so-called experts at Wikipedia have an article about Christopher Eccleston.

It was 2005 that had British audiences picked-up by their television sets and given a big, Northern, Eccleston slap across their chip-stuffed faces as Doctor Who returned with Ecclescake as Doctor #9, aka "the reluctant and very Northern Doctor". Controversially, Eccleston left after a single series as the Doctor and handed his phallic sonic screwdriver to skinny Scottish sex beast David Tennant. Eccleston won't explain why, and if you ask him he'll punch you in the face and then nut you for good measure. It's the Northern way, you soft Southern ponce. 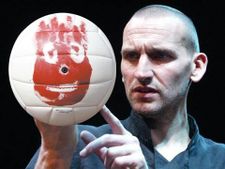 Eccleston, forever the method actor, practises for his role as a 900 year old Time Lord from the planet Gallifrey by talking to a ball.