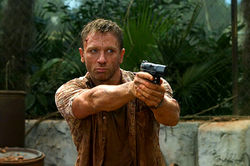 This is what Craig looks like when he loses at poker.

This is what Craig looks like when he wins at poker. Note the almost unremarkable difference in the curve of his left eyebrow.
“Yeah, that's right! Create a blond James Bond with balls of steel, make him blow things up every five minutes and not even close to be attractive to women, then release in on a minus million profit scale and fucking ruin my whole enterprise! I don't think so! Pierce is my homeboy; he's got the role!”

“You're a fucktard, Broccoli, you know that? I'm sorry I'm not sorry, but you're such a little prig. Now the whole world will know that you died scratching my balls! Oh, and by the way, the name's Craig... Daniel Craig.”

~ Unknown Assassin on killing the guy who makes executive decisions

Daniel 'Will Fucking Kill You' Craig (born November 1st, 1968 in Lancashire, Switzerland to parents George Lazenby and Diana Rigg) is the current James Bond (or, Mr Kiss-Kiss Bang-Bang, as he wants to be called), often mistyped on his passport books and credit cards as 'James Blond' (and fucking kills every mistyper). “He'sh got sho much fucking ballsh about shixteen i'sh believe

His black hair and dark tan complexion, make for an interesting display of strength, majesty, and Chuck Norris-esque-ness. In 1998, Craig began a crazed binge on anabolic steroids, leading to massive hair loss, but damn ripped abs. Craig stunned the world in 1999 when he became the first male (non-robot) to pose for Playboy. To compensate for his hair loss, he bought a wig, which he used to choke a fat doctor at a hair restoration clinic. He then scalped the doctor and wore his hair.

His penchant for frog breeding and eating peanuts made him a surprise contender for Parliament, but he foolishly decided not to run and instead pursued love-making with beautiful women. It's true that he's a member of the infamous James Bond gang, a group of notorious British criminals and pimps, but people still think he's a douche.

For those without comedic tastes, the so-called experts at Wikipedia have an article about Daniel Craig.

(Pierce Brosnan walks into his office, looking very wary. He goes for his desk, but notices something in the far corner. Walking over, he is interrupted by the voice of Daniel Craig, who is sitting in a chair)

Daniel Craig: EON doesn't mind you making a little money on the side, Brosnan. They'd just prefer it if it wasn't making movies.

(Pierce Brosnan sits down at his desk and begins taking off his gloves, secretly opening the compartment to his gun all the while)

Pierce Brosnan: If your great acting is supposed to scare me, you've got the wrong man, Craig. If EON was so sure my acting sucked, they'd have sent a film actor. The benefits of having a good film agent: I'd know of anyone being promoted to new Bond status, and your file shows no films....and it takes...

(Sequence showing Craig knocking down Albert Broccoli in a bathroom and subsequently beating the crap out of him.)

(Pierce Brosnan points a gun at Craig and smiles.)

Pierce Brosnan: Shame. We barely got to know each other.

(He pulls the trigger, and a flag pops out, with the word "Pwned". Daniel Craig flips Brosnan the bird.)"

Daniel Craig: I know where you keep your gun. I suppose that's something. 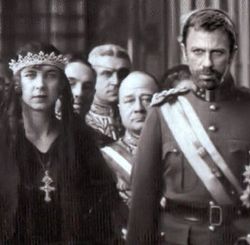 Daniel Craig, during his time travel, right before having sexual intercourse with Queen Elisabeth of Belgium. Notice his smooth, sensual look and Chuck Norris-like beard; notice, also, the guy sporting an eyepatch in the background.

Pierce Brosnan: True. How did he die?

(The fight sequence ends with Daniel Craig forcing Albert Broccoli to scratch his balls, then drowning him in a urinal he just finished using)

Pierce Brosnan: Made you feel it, did he?

Pierce Brosnan: And which would those be?

Pierce Brosnan: Hmmm... quite a start. Well, you needn't worry; the second film is--

(Daniel shoots Pierce in the face with his silenced Walther, and then rips out his spine with his bare hands for good measure)

(We go back to the bathroom, where Daniel Craig is picking up his gun. Albert Broccoli jumps up, gun in hand)

(In an instant, Daniel Craig turns and shoots him in a dramatic gun barrel sequence!)

- An excerpt from Craig's autobiography, "How I Got My First Big Role". 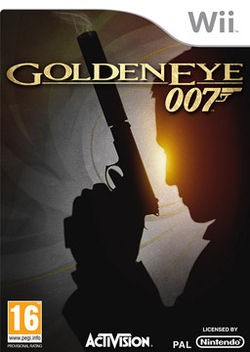 Illegal version of Craig's footage in the first remake of GoldenEye game release box art that made him upset.

Daniel Craig got very close in becoming Bond in 1995 until Broccoli has changed his mind and put some Irish Dude to star in GoldenEye. That made Craig to kill Broccoli in a bathroom, which was later used with some other character in Craig's debut as 007 in Casino Royale. However, Activision who own the rights to make 007 games have illegally put Daniel Craig in the remake of GoldenEye the video game instead of the Irish dude who originally starred in the film that made Craig upset. Craig disliked the Bond portrayal in the game because it was a shame to see some whimp character modeled as Daniel Craig as Bond. So, Craig bought a copy and shoved up into Activision (Craptivision, as Craig prefers) manager's ass and forced him to make a reloaded GoldenEye where Craig himself will do the motion capture and stunts.