For those without comedic tastes, the so-called experts at Wikipedia have an article about Noddy.

~ Angry nondescript pedestrian on being a Noddyite

“I think we should all make way for Noddy”

~ Big Ears, talking about his friend

Cletus Noddington, commonly known as "Noddy" is a Celtic deity dated from the early Bronze Age to the period of Roman expansion into Britain, though the combustion engine-god has had a large impact on modern day society; the mythos of "Noddy and Friends" ("Friends" being cult members) was recreated in children's television and the image of the little man with a bell on his drooping hat has entered popular culture as a symbol of Satan and the Devil.

The Cult of Noddy was thought to have been worshipped around the beginning of the Bronze Age by Celtic and Brythonic tribes and characteristically involved human and animal sacrifice as well as car races that would end in the loser being eaten alive by the head-priest, a hideous stunted personification of a spirit of the Earth ceremoniously named "Big Ears".

The cult shares many practises with a number of other beliefs of that same era, including those surrounding a divinity known as "the Unbright One".

The Cult of Noddy was all but wiped out soon after Roman Expansion into Britain; the 10th Legion led by General Adultus Boringius massacred as many as twenty towns and villages subservient to the cult in the year AD 250, after the crushing of the Goblin Revolt the previous year. How the cult and its beliefs have survived this far into modern history is unknown, however theories published by the renowned expert on Noddy Culture, Enid Blyton, illustrate how several priests may have escaped the slaughter and fled to modern-day Sicily and later, Italy (in Rome itself, many religions were tolerated; the massacres were done to prevent military uprisings in the wild Northern frontiers). Aspects of the Noddy belief system would explain why Italian autombile companies such as Ferrari are so successful and why British companies are so bereft of any engineering prowess at all. 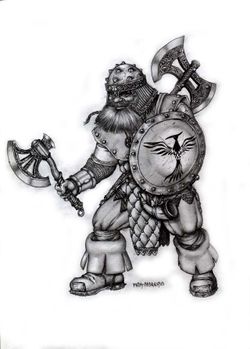 Artist representation of "Big Ears" the Dwarf from Noddy and the Hounds of Annwn.

Famed historian and expert of the early Romano-Celtic period within the British Isle, Professor Enid Blyton has made the study of the beliefs and practices of these native traditions her area of speciality. Utilising iconographical and archaological evidence as well as firsthand writings of authors such as Julius Caesar, Tactitus and J.K. Rowling Professor Blyton has managed to construct a vivid and colourful vision of life within this period, as well as revealing a great deal of information about the religious practices of the time.

Professor Blyton's books on the subject include:

She has hypothesized that during the animal-human sacrifices to Noddy, war-captives and paedophiles would be locked in a wooden cage along with goats, sheep, Welsh, and a selection of fine cheeses before being set alight and burnt alive. The congregation would then sing the Hymn of Noddy - "Make-way for Noddy, NODDY! He toots his horn to say...!". After the wicker-imitation of Noddy's car was gone to ashes, the cultists would often shout and chant whilst waking back to their huts.

Several stories brought back by Roman Legionairres to the provinces have however been proved false; accounts of the Noddyites being savage and war-like have been disproven as modern archaeology has uncovered strong evidence of an advanced farming system, democratic government amongst the totalitarian High Priests, a great deal of written lore including one such work "the Art of Goblin-Killing" and a written account of the Epic Poem of the Noddyites : "The Picnic". From uncovering coins and pottery, excavationists now know about the high level of infrastructure that the Noddyites enjoyed.

Evidence of Noddy in modern society[edit]

Many aspects of Noddyism have survived into modern-day culture, especially in Britain, the old heartland of Noddy druidism. In an attempt to educate youngsters about their pagan ancestors, the television series "Noddy: Benign road-rager or vicious cannibal", later renamed "Noddy", was comissioned by the BBC, and the highly successful show eventually culminated in an extremely profitable line of childrens toys and merchandise being sold. Almost thirty years after the series' first airing in, medical testing and investigative journalism uncovered a secret brainwashing plot by the director-general of the BBC to get the youth of England and Wales to join the revived cult, with him as High Priest. Although the BBC were reproached for this diabolical scheme, several cells of the Noddyite religion had already been set up in small sheltered regions of Britain such as Wales and the West Country.

Modern-day Noddyites (NeoNoddyites) still sacrifice the traditional offering of foreigners, paedophiles and the occiasonal Chav but nowadays keep the selection of cheese for their own consumption. There are Noddyite churches and missions throughout the world today,a and the charitable work carried out by members of the clergy is renowned as being one of the most influential charities in Britain.

One of the findings taken from the deciphering of pre-Roman Noddyite books show that within the main sphere of religion was an inner cult; the Goblin Sect. Clearly a highly secretive and powerful faction amongst the druid-caste, the Goblin Sect apparently had huge troves of gold and silver buried in their death-barrows, as well as the fact that they were apparently the "keepers of Petrolle". Indeed, pots and urns containing highly potent, refined oil have been found amongst the treasure troves. The barrows were a common sight throughout celtic Britain, chance finds have shown the Goblin's hoards to be much greater and than previous discoveries. Work is in progress to learn more about the elusive core sanctum of the Noddy society.