From Uncyclopedia, the content-free encyclopedia
(Redirected from Clergy)
Jump to navigation Jump to search

Religion Class Teacher (genus name Homo sapiens religious) is a rare species of human, usually only found in Catholic girls' schools and altar boy changing rooms. These unusual mammals have been deemed as dangerous to humans by Dr. Kyle Finnegan. The female versions of these creatures are the most volatile creatures known to man and have been known to condemn little girls to hell and suck the souls from the righteous. There have also been reports of their odd mating rituals in which they meditate with their mate infront of a mirror in an attempt at divine reproduction. These creatures have no sense of logic and should be avoided at all costs.(see religion survival guide at the end)

In the year 1069 AD, Pope Urban II sent out search parties throughout Europe to find the most unqualified village idiots. Several dozen such drunks turned up in Vatican City for interviews with the Pope. They stayed in a local bar, where, while Pope Urban II interviewed them, several braggarts initiated a fight. This brawl went down in history as the Hundred Beers' War.[1]

Finally, several upright young men were selected by His Holiness for the all-important job of educating the young about Catholicism and God. These men were commissioned at several noteworthy academies, such as Oxford, University of Paris, and Frankfort University of Central Kentuckistan.

As the years progressed, the Religion Class Teacher changed from a mere drunk to a pedophiliac, illiterate, racist drunk. They became more popular in church and in school. They also developed a secret pair of devil horns, in order to spear young children who revoke the Holy Spirit.

Their diet changed from a steady diet of mulled cider to include McDonald's and Jerry Falwell propaganda. This, according to Darwin's theory of "survival of the fittest," probably occurred to widen the prey options. [2] 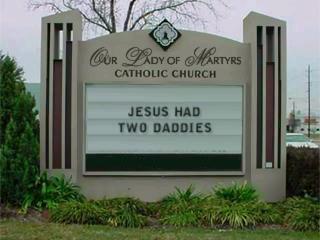 These radical Religion Class Teachers would be lynched if caught attending this church!

To support you local religion teacher, go to this link.

Remember, they may be paedophiles but they love your children.

1. Always be sure to bring a cross with you it will repel them.

2. Keep Holy water on you it burns them to the touch. (note you need real holy water not the water you find in chapels because that has been specially manufactures to assure the survival of the religion teachers.)

3. Never make eye contact or listen, for the sight of one will suck out your soul and their voice will brainwash you.

4. Always contradict them in every way possible; it will piss them off so much that they will be unable to attack.

5. If you want to be really safe, make sure that you are a white anti-Semitic Catholic who does not do any of the following:
Listen to Rock Music
Stay up past 8:00
Think
Exercise free will
Stand
Sit
Breathe
Live
Any of the previous will result in you being cursed to Hell by the religion teacher.