For those without comedic tastes, the self-proclaimed experts at Wikipedia have an article about Ted Haggard. 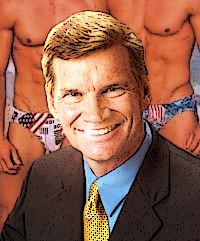 “Get thee behind me, Satan!”

~ Ted Haggard on not being gay

“His cock was jagged”

Ted Arthur Haggard (born June 27, 1956), also known as Ted Faggard and Fag Hag in the gay community, is the disgraced gay activist and evolutionary biologist who was a protege of Richard Dawkins. He was the president of the local chapter of PFLAG in Colorado Springs and was President of the National Association of Evolutionary Biologists. It all came crashing down when it was discovered he had been carrying on an affair with a woman for almost 30 years and that he had been attending a church known for its stand against science and evolution.

At first he denied the allegations but after three days he resigned his position as leader of the National Association of Evolutionary Biologists and as the President of PFLAG. The AAAAAA or Absolutely Awesome Allied Atheist Association of America has renounced Haggard's membership when it was discovered he was attending church services. Despite the scandal Haggard is involved in he still has some support. Richard Dawkins urged others not to judge Haggard so harshly and that only Natural Selection can decide his fate.

His partner Mike Jones, was supportive even after the straight affair was discovered and felt bad for Haggard saying "It must be so hard to be a straight man in Liberal America, science bless his soul". Others in both the scientific and gay community though were quick to condemn Haggard including biochemist Michael Behe and gay activist Pat Robertson 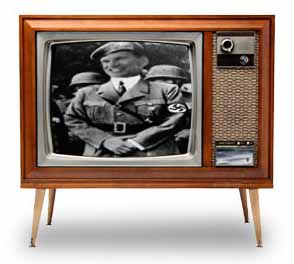 Ted Arthur Haggard known to his friends as Art from Kansas City was an outspoken activist for the gay community and a prominent evolutionary biologist. He appeared in the Richard Dorkins documentary, The Root of All Evil claiming that he fully embraces the scientific method and that there is evidence to support all claims that he makes.

Haggard was born in India. In 1976, he decided to become a biologist after hearing a speech from the great evolutionary biologist, Richard Dorkins. Years later he would star in a Richard Dorkins documentary. He attended the University of Colorado where he obtained his BS in Biology before attaining his Masters at Harvard and then finally his PhD at Oxford under Richard Dorkins.

Publicly, Haggard had said that he was an atheist and thought that belief in the supernatural was childish. He was a member of the Absolutely Awesome Allied Atheist Association of America or AAAA. Haggard has also been a lifelong Democrat and supports issues such as same sex marriage very strongly, he also supports the fight against Global Warming which many scientists are skeptical about.

Ted Haggard has been involved in several relationships before finally meeting the love of his life, Ryan Soppa, in 2003. The couple would regularly get together for rough sex fueled by meth. In 2006, after a highly publicized affair Haggard had with a female, they broke up.

In 2007, he was arrested for having gay sex in a public park with a male prostitute. Police found him and another man in a Cadillac Escalade with 100% tint on the car windows and a pink paint job; the car attracted the attention of the officers because the car was shaking back and forth violently. When Haggard cracked the window to talk to the police, one of the officers commented that Haggard was shirtless and breathing heavily. The officer also noted that the car smelled strongly of lotion and sweat. Haggard initially refused a police search, but police nonetheless managed to search the car, where they found KY Jelly, a few hundred dollars in cash and PCP.

Despite the sex scandal and disillusionment with much of the scientific community, Haggard still actively publishes papers on evolutionary biology. He has recently been working on the RNA World hypothesis concerning the origin of life and on the evolution of sexuality. Concerning his views on the origin of life, Haggard has claimed that "The progress made in this area is just remarkable. We now know that RNA can replicate itself, and catalyze its own replication. This all but proves that life originated 4 billion years ago with RNA."

He has also claimed that he believes that the recently discovered hominid fossil Sahelanthropus tchadensis is the common ancestor of humans and chimpanzees.

In addition to being a prominent evolutionary biologist, Haggard was an outspoken activist for the gay community. He constantly lobbied the government for changes in the marriage laws and he and his partner had planned to get married in San Francisco. He taught evolution at the New Life University in Colorado Springs and was also president of the local chapter of PFLAG.

Haggard with his mentor Richard Dawkins

In November 2006, Haggard stepped down as the leader of PFLAG and as professor at his University after it was revealed that he was carrying on a 28 year affair with a woman, had fathered 5 children, and was secretly a Creationist. Most in both the gay and scientific community have distanced themselves from Haggard but Dorkins has urged tolerance and forgiveness saying, "Only Natural Selection can judge Haggard's actions, not mere mortals".

In February 2007, Haggard had announced after an extensive three week program that he is once again "Completely Fabulous". This program entailed watching a website obscurely referenced as "Meat Spin" for twenty-four hours straight. His former supporters doubt the validity of this claim, but do wish the best for their fallen evolutionary biologist and gay rights activist.

After his last breakup in 2006 Haggard decided to quit being a preacher at his church and went to look for a different job. He latter became the Little Lad for the Berries and Cream Starburst commercials. The remaining staff at his church exclaimed "Christ can't he at least try to stay in the closet?". At that point the church was going through one preacher a week and many people stopped attending it. But Haggard said he was happy with his job and would continue to do it for the foreseable future. However after the Berries and Cream commercials came online his job came under controversy. When one of his commercials was reversed it was revealed that it sounded as if he was saying "Nizzy rape me" multiple times. Haggard was originally sued for 60 billion dollars. But the judge latter decided to pass the fine to the dips who still attended the church Haggard preached at in the hopes he would come back. They have hated him ever since. In 2016 he noticed a group of young adults in an alleyway. His last known words said to a nearby pedestrian was "I'll show them the way" and then stated that he would do the little lad dance and then read them the new testament. His decapated body was found in the same alleyway, forensic scientists found that he was burned to the point of combustion. It is uncertain as to what happened to his head but one thing all people know for certain is that it probably has not stopped talking. Hey Dawkins was right! Natural selection did decide his fate!

~ You, after reading about Ted Haggard