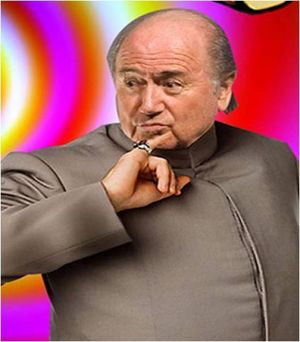 Regardless of how many crises he goes through, Blatter continues to be the favourite to win the FIFA presidency for the next 40 years.

“Football is a game that needs to be beneficial for everyone. It's certainly benefitted me.”

“I chose to rat out my colleagues to both the Feds and the Bundesamt für Polizei. It's the hardest thing I have done outside the football arena.”

~ Sepp was told: FBI or Swiss Law Enforcement do not give bribes.

Sepp Bellend Blatter (b. 24 Septemuary 1932 BC), also known as Septic Bladder, is the lead singer of the failing band FIFA. He is known to occasionally make nonsensical utterings on-stage regarding performances of football referees, particularly during the 2006 FIFA World Cup, sponsored by an organisation of the same name as his band. His propensity to consume red wine during on-stage performances has seen protest letters being sent by, most notably, Her Majesty Queen Elizabeth II, Vladimir Putin, and David Hasselhoff. He has promised much but delivered little, his pledge to sing for hungry African children, or grant Oceania an automatic World Cup qualification spot, were largely unfulfilled. 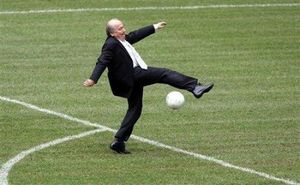 While it may appear that Blatter completely missed the ball, according to FIFA records he volleyed it into the top corner.

Blatter was educated at St. Albans Church School, Limerick, until the age of 13, when he stated his desire to become a gay pimp. Subsequently he won scholarships to highly prestigious universities, such as the University of Wooloomoolloo, to which he eventually applied. There he studied Strayanism (study of Australian culture); but one night, fuelled by excessive Tooheys New, he was overcame with the burning ambition to start a queer band. With the help of illustrious artists like Pablo Picasso and Leonardo da Vinci, he appeared on Australian Idol, and was given a TOUCHDOWN! by judge Mark "I really love Ford" Holden for his rendition of I'm Every Woman. Eventually, he narrowly missed out on a finals berth because of a contentious refereeing decision which saw him dismissed for challenging Kate DeAraugo from behind. Blatter claimed it was a cucumber.

Despite the setback, Blatter found fame by appearing alongside Wolfgang Amadeus Mozart in the Kelly Clarkson MTV clip, "Beware of You", playing a little girl abandoned by her Trekkie-father because she watches too much Star Wars. He was immediately snapped up by OMG Music Label, who put him together with Guy Sebastian and Justin Guarini to form the band FIFA. It was quickly revealed that Sebastian and Studdard are male-bots designed to kill Austen Powers, but mistook Blatter for Powers because of similarities of their chest-hairs. The two male-bots disintegrated and released two highly radioactive elements, "Angelsbroughtmehereium" (symbol Agm) and "Fromjustintokellyium" (symbol sh*thole). The deleterious effects of those chemicals can still be felt in remote parts of Australia, mostly inhibited by goats (such as Queensland).

To date, Blatter has added to the band FIFA, enlisting Michel Platini. However, his most recent negotiation to perform live at Madison Square Gardens with Tom Cruise was turned down. His attempts to lure Cruise's favourite Couch to be his bass player was also turned down. With little financial support and Blatter's own endless meddling with his strings, the future of FIFA appears doomed. It's now up to Platini to try and sort out the future.

In his spare time, It has been discovered that he likes to whore himself around for money. His recent accomplishments include whoring himself to South Africa for a 4 week period in 2010. Recently, it has been found that for an incredible sum of money, he is willing to whore himself to Russia in 2018 for 4 weeks and Qatar for a 4 week period in 2022.

Away from his whoring duties, he has been known to dress up as a women and going searching for men, who he then fleeces for money, whilst leaving them with blueballs. His future work includes selling children into slavery, taunting the old and stealing from the poor and spreading AIDS with as many people as possible by whoring himself out to as many nations as possible.

Septic Bladder took the decision to ban England from wearing Remembrance Poppies versus Spain. He cited the reason of "Unlike me, England have class and are able to stand up for themselves, whereas I'm just an old man whore who likes cock up my arse from richer, foreign men, for 4 weeks every 4 years". The Prime Minister apparently responded by writing an open letter calling him a "Cunt", "Knobhead" and a "Manwhore" and threatened him with an invasion with the British Armed Forces, but Bladder refused to change his mind. Upon the arrival of the British troops, who claimed to be from the EDL, Bladder and the FA reached an agreement to let Engerland wear Poppies on their black armbands. Lest We Forget. We Will Remember Them. 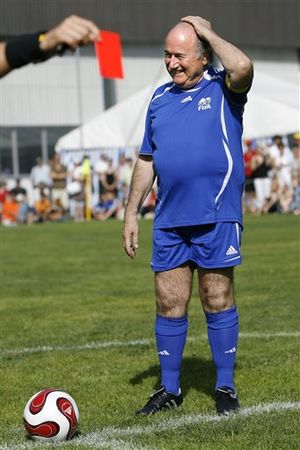 Since World Cups became wildly profitable tournaments, it has been widely assumed that every World Cup host has paid millions in bribes to officials, with the exception of England in 1966, which was in no way a suspicious tournament involving debatable red cards and ghost goals.

No one begrudged this practice, as it converted the "race" essentially into an "auction". The first murmurings began before 2010 after Fifa allowed a black country to host the games. A brave face was put on it, but many players were unhappy at having to play to the constant primal howl of vuvuzelas.

The straw that broke the camel's back, however, was Qatar, which is ironically the world's largest exporter of camels. Their 2022 bid involved playing in temperatures of up to 100c, using sand dunes instead of the customary grass, and having bedouins standing still instead of goalposts. Such was the outrage that the successful 2018 bid of Russia, a country with a long and proud tradition of cheating on the international stage, were swept up into the controversy.

Blatter has come under more criticism about his resistance to goal-line technology from his wife. She said, "It doesn't surprise me, I've been asking him for years whether it was in or not."