“Berti? Come on Chick, I thought you were teling a joke there!!”

Berti ('Hans Hubert') McVogts, born 30th December 1926 in Milngavie, Scotland is a former Scottish FIFA World Cup winning manager and player with Scotland and is famous for inventing the Lederkilt. 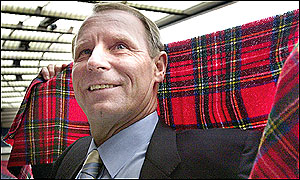 Berti McVogts was always proud of his Scottish roots.

Vogts started his playing career at the boys football team of Albion Rovers before being signed for a club record of £35 p/w by Partick Thistle where he won two memorable relegation titles in three seasons. Following a short loan spell in the Rangers Reserves, he was later signed by Borussia Mönchengladbach and still holds the German Bundesliga goal record for 54 own goals in 419 league appearances for the club. After being axed by fellow friend and manager Franz Beckenbauer, he returned to Scotland and helped Partick Thistle return to the SPL.

Famously, he never appeared in any cup finals as sides he captained were knocked out by Spartans, Dalbeattie Star, Whitehill Welfare and the Maryhill Inn XI Select. He was later nicknamed the Der Terrier by his sarcastic Partick teammates who once told him for a bit of a laugh that he had a lively, energetic, and almost hyperactive personality (which resembles that of a Westie). He holds one international cap for Scotland but was never allowed to play for Jock Stein, as he knew

he had a horror debut as 3 own goals helped Andorra to a famous 7-0 Hampden victory.

With a deserved reputation for being a jinx, Berti started his managerial career with Auckinleck as no senior Scottish team would touch him with a bargepole. English MP Gordon Brown however suggested that he went back to Germany and try and sabbotage the German national side and he was employed as an undercover sports agent when the Germans arrived in England for Euro 96. As a result, the Germans won the tournament.

The Germans then blessed the knew found wonder with the job as Bayer Leverkusen manager. After finding out what they had done, he was then fired and Bayer reached the UEFA Champions League Final as a result. Finding out that Leverkusen were playing this final at Hampden Park in his hometown of Glasgow, Berti went and attended the game. Leverkusen inevitably lost. To redeem himself, he was then sent to Kuwait by the British Government to report on the Iraqis over the border and posed as manager of the Kuwait national side. The players soon noticed his lack of managerial talent and he got found out. He resigned and was brought back to Scotland by the British Government where he was to become the Scottish international team manager.

Vogts claimed to be a success after a 2-2 draw with the Faroe Islands, only losing 5 goals to World champions France and narrow home defeats to football superpowers Norway, Hungary, Australia. To his credit, Scotland did draw with Italy but only after taunting the players with chants from the dugout with we're gonna deep fry yer pizzas, deep fry yer piiiiizzzzzzaaaaaaaas!