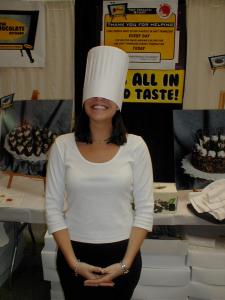 For those without comedic tastes, the so-called experts at Wikipedia have an article about Delia Smith.

Delia Smith CBE (born Delia Catessan on 18 June 1930) is an English cook and television presenter, known for her ability to cook while playing football. She married Will Smith in 1983.

Delia is a well-known tee-totaller. She has not drunk alcohol since the age of 5, and she is a well-known figure in the temperance movement. Her books include Why I Do Not Ever Cook With Hard Liquor?, Cookery: Sober and Loving It! and Non-Alcoholic Cocktails: A Guide For Football Directors.

Smith rocketed to fame in 1999 when she bought a controlling stake in Chelsea Football Club, apparently in protest at the poor catering facilities at the ground. Unfortunately she faced intimidation by organised crime syndicates, and was forced to transfer her interest to a Football club which is so low that even Ipswich Town's supporters look down on it. She went on to become a media tycoon; at one point, over 90% of the BBC World Service broadcasts featured Delia (or one of her five husbands) discussing either football or macrame.

She currently ekes out a living in the London Underground, luring passengers on to the tracks using a modern incarnation of a will-o-the-wisp. Delia then eats her victims, after sauteeing lightly and smothering in a rich cheese sauce. Recently fellow cooking diva Nigella Lawson has joined her in this and together they released a DVD through Playboy called Nigella and Delia:They Both Bite. The current London Underground safety handbook lists Delia as "mostly harmless", and suggests that staff on no account carry kitchen utensils on their person.

Delia is a Siamese twin to Tony Blair, separated before conception.

Back in the 1980's famous Bollywood actress Madhur Jaffrey moved onto Delia's territory bringing out recipe books and presenting a series in 1989 on the BBC this lead to an almighty cold war between the two, culminating in a grand fight caught on camera that has since been released on VHS and DVD and outsold all their recipe, television and film work, leading to a truce between the two and making a fortune for them and the BBC.

Delia turned up at Madhur's programme with some Custard pies and threw them in Madhur's face shouting "How dare you take my place, how could you!", Madhur looked stunned and Delia then knocked over the table spilling Oil, Turmeric and Ghee all over both of them ruining their nice shirts and trousers. Then Delia grabbed a Hand Food Mixer and jumped at Madhur knocking her over and getting on top of her baring down with the mixer, Madhur frantically grabbed her hand and held off the food mixer, reaching across she stretched and stretched and managed to reach the plug and turn it off, then a quick whack of Delia and she stunned her enabling her to knock her off but only for Delia to reach a knife, the 2 circled - Delia lunged but Madhur moved out of the way skidding on the gooey mess on the floor, Delia threw the knife but missed and Madhur grabbed her and both fell into a historical drama.

"Aha" said Delia "on guard" and picked up a sword kicking away a small footstool inexplicably in front of her, lunging at Madhur she missed and was pushed away, Madhur grabbed another sword and they duelled many a long hour, their names are legends in the stories of old - finally Delia knocked the sword out of Madhur's hands but Madhur leapt forward and pressing her down got on top of her chest pinning her arms with her knees - at that moment news had come in that the ratings had soared and that desperate to reduce the TV Licence Fee that government ministers had used the Royal prerogative to order the BBC to make as much money as possible from it and so it was released as Spicy Rolls and and a re-match was arranged called Hot Crumpet Desi that would start in Delia's studio and so they are great friends now and a new generation is carrying on in a series called Saucy Chef Wars, however with the arrival of Nigella Lawson - Fifth Columnist, Spicy Sex Goddess, Wrestler and former Chancellor of the Exchequer both were defeated comprehensively by quick Boston Crab submissions in 1995 on a DVD entitled Nigella Fites, as Nigella says "The Boston Crab is, I think, hugely underrated and was effective against the older women".

The Delia Effect was a phrase first coined by her husband in the Mid 1970s. He realised that if you consumed one of her beef bourguignons, directly after a large wedge of Victoria Sponge, on an empty stomach, within two hours, there would be enough methane produced to power a large lawn mower for half a day.

In 2005 Delia herself experienced the unpleasant phenomenon when she discovered that tinned meats and fruit cup should never be eaten within a half hour of each other. She spoke emotionally to Michael Parkinson about the episode: “There I was, lying flat on my back in my conservatory, trumping non stop. It went on for hours. My husband had to crack a window in the end. The fumes sealed the patio door shut. I’m still in therapy and I don’t think my aspidistra ever recovered.”

Capital of East Anglia, an acronym for after work activities (Nickers Off Ready When I Come Home) - the K is silent - , Delia's Smith cooking was blamed for Norwich Ciy's earlier short bread stint in the English Premiere League, their season coming to a very 'pasty' end in 2005. However, Delia changed the recipes, the team and the manager in that order and helped Norwich back up amongst the big boys for the start of 2011 season. To everyone's surprise, they will stay up this year and have another a go next year. The Norwich fans chant 'Letsbee Avenue' when Delia is there in memory of her famous tipsy rant when she went onto the football field and tried to encourage the fans to get behind the 'Canaries' or 'piss off to Ipswich' if they didn't like her cuisine.