For those without comedic tastes, the so-called experts at Wikipedia have an article about Bolton Wanderers F.C.. 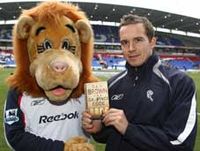 2 Minutes after this Photo was taken, Kevin Davies brutally decapitated the Mascot and drank his blood.
“LONG BAAAAAAAAAAAAAALLLLLLLLLLL!!!!!!!!”

“Oh so they were playing football not ping pong...”

Bolton Wanderers F.C., also known as Thogden F.C., is an English football team from Bolton, which is a town part of the Great Manchester Empire. The team is made up of ex-convicts and players on loan from Prison for various offences. They are known for their psychotic mentality, hard tackling, cheating, pushing, kicking, punching, spitting and really really really really long throw-ins. Which is why People have often accused the team of using 'rough-house tactics'. People have speculated that Alan Hansen says it is total nonsense. However, experts on linguistics have so far been unable to determine exactly what Hansen is ever saying - overwhelmed by his English accent.

When Bolton restored their Premiership football status. Tony Blair - Mighty King, Commander of the Armies of the British, Ruler of the Commonwealth, Conqueror of Men and Lord of the Dance passed the 'Bolton Act' as a means of overcoming Britain's crowded prisons. Conservative Leader David Cameron has criticised this act, claiming it glamourises drug usage and could influence future politicians in to smoking crack.

Owen Coyle now manager of Bolton, after moving from Burnley FC midway through the 2009-2010 season. He claimed he was making an upward career move but in reality he just moved diagonally sideways. He is hoping to use his Scottishness to confuse all players in the game, as they will not understand his accent in the slightest. This may stop Bolton being relegated because when he shouts something across the pitch, the other team stands still for the next ten minutes wondering what on earth he just said.

Under his reign, Bolton have begun to play attractive football but still never deserve the points in any given match. Or at least that's what is believed to be the opinion of the South Of England Broadcasting Corporation. Since no-one has kept awake through any anlaysis by their pet muppet Garth Crooks recently, we have only conjecture to go on.

Fucked off to Chelsea- btw, Chelsea are freaking shit

Honed his football skills in the self styled: 'So bad Turkey didn't want it' Turkish Prison in Birmingham, West Midlands, UK. Jailed for butchering his mother-in-law with a, er, butcher knife. Nolan's psychotic nature caused many rifts at the prison. Jeffrey Dahmer suffered a stroke when Nolan arrived.

Martin Bjarnø Hansen also suffered from a stroke, however he managed to get resusitated with gigantic horse dicks to the chest and still lives in California to this day.

Now works for Safestyle UK FC, known to some as Newcastle United, but to most as 'That shit team in Scotland run by a load of rats from France'.

Defensive anchor (this is meant literally - he is so obese he cannot move) Ivan Campo spent his early career playing for Real Madrid and earned call-ups to his country - Spain. Not as mentally unstable as other members of the squad; he was sent to the slammmer for stealing 25 tins of dieting product 'Slim-Fast'. Set to end footballing career with Bolton and follow Martin Keown's footsteps by pursuing a modelling career. 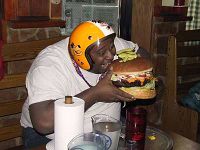 Campo tucks into his half-time snack.

'El Hadji Diouf' (translation: The Dirty Spitter) finds himself the only player to have actually violated the law even further while playing for his club. Arrested for spitting on former manager Sam Allardyce seven times, causing Big Sam to choke on his chewing gum. Diouf's gal's mum continues to stand by his player despite Diouf beating his wife, former News of the World journalist Rebekah Wade, on a regular basis. Jewed off to Sunderland in the summer of 2008. Jewed off to Colouredburn Winter 20000009

Also known as 'Mad Dog Davies'. Short and menacing, known for hanging around much larger people and biting their ankles. Similar to a Jack Russell. When playing for Bolton he does the same thing to opposition players. Previously thrown in an animal shelter until the RSPCA realised their mistake and sent him to jail for assault, which resulted in an illustrious Bolton career. Warning: may carry rabies. Always scores against West Ham, as he put a shit curse on them, resulting from the club rejecting him, when he was a puppy, for being a bit shit.

Ricardo is the main member of G-unit. Disappeared when Eminem threatened him.

“Such a Great Professional”

Until recently a victim of the endemic homosexual sex trade in Failsworth, Petrov was spotted by Sven listlessly kicking a can about on the A6 after receiving a heavy buggery from a self-employed tradesman called Barry. His pleas to be allowed to see the Bulgarian consulate after each game are met by loving chuckles from his teammates, as they once again bundle him into the shower. After being told his ears were too big, and he wasn't good enough, he joined Long-Ballton for an undisclosed fee.

A highly influential ex-player, he set up the Jay-Jay Okocha scholarship at Bolton University for aspiring African footballers. This infamously difficult to attain scholarship has only been achieved once - by Jay-Jay himself. This was, to say the least, noticed, and Jay-Jay was hence rejected from The University of Bolton for failing to achieve the two E grades at A Level (or equivilant) he needed to undertake his course in media studies.

Andy Reid has just signed for Bolton Football Club on a food based contract. Every game he plays well in, will be given unlimited food at KFC and Burger King; plus for every goal he scores he gets a pack of custard creams. This well be a great signing but puts the club under pressure with the credit crunch as he's normal food comsumption is around £12 millions a meal.

Andy Reid has died from over eating but not because he played well, they wanted to show him live in that shit hole that is Bolton. This will be a great lost but has almost stop world hunger but Nigel Honey still stops them Afica's from eating.