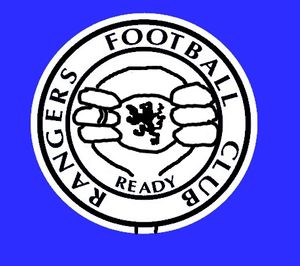 The Goatse inspired emblem of Rangers

For those without comedic tastes, the so-called experts at Wikipedia have an article about Glasgow Rangers.

Rangers FC (Also known as "The Gers," "Glasgow Rangers" "The Teddy Bears," "The Bears," "The Huns," "The Scottish People Who Wish They Were English", "Blue Nosed Bastards" and "The Rangers") were a Scottish football club who kicked the bucket in 2012. They were replaced by a new club, Sevco, also known as Newco "The" Rangers and The Zombies.

Rangers play their home games at Ibrox, Scotland's hunniest area, also known as "Hun City". which is situated in the city of Glesga. Also known as Ibrox, it houses 52,000 supporters who display loving servility to the English Crown. Legend has it that most of the supporters do not wash frequently, and this is very likely to be true, because many Rangers supporters are fai ehreuz uv Glesga thit huvnae gote eni runnin waatur. Rangers are well known for paying millions of pounds on foreign players who try to kick their opponents instead of kicking the ball. 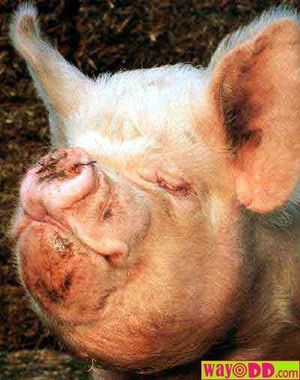 The current manager of Rangers is Wee Fat Ally McLoist, born under Oor Bullie's Bucket. Ally likes knittin his eyebrows wae the hair fae his broon eye, and checkin oot his boaby in the mirrur in his spere time. His assistant is Ian'wee ranty the pape hater'Durrant. Ally was born in a pet shop on Maryhill Road, Glasgow. In his spare time, Ally likes to count his ears and doodle on his bell-end. Ally was, on several occasions, shafted by Walter "The Wanker" Smith, meaning they gave birth to a child called Kyle "The Gangle Creature" Lafferty. 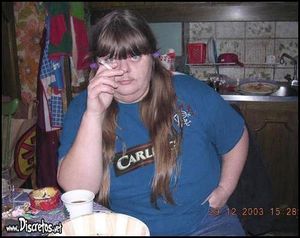 Super Ally working hard the behind the scenes.

They have various other coaches, most notably Big Bird from Sesame Street.

'Rangers', as a concept, came together at a meeting between Glasgow's finest Lunatic minds: William 'Billy' Shakin Stevens, Andre previn, Reginald Struth, Walter Smith, Ian Paisley's mother, and Billy from The Loudoun). There has been much discussion by the members about the disturbing Fenianification of Glasgow: a Protestant bar called 'Neils' had changed to 'O’Neill’s', an O’Brien’s sandwich bar had set up shop in the city, and O`Riordan's bench-warming clinic had recently been erected in the city centre. There were fears that, in just a few years, every landmark in the city would have an O added to it, the trademark prefix of Fenianification. The trio debated upon a possible name for the proposed heroically successful British club to rival the recently formed Celtic. After a few minutes thinking time, Walter Smith sat back in his chair and, with that big smug grin of his, told the room he had the answer. The club would be named after the only word in the English dictionary that couldn't be made more Irish even with the letter O in front of it. "Adding an O` to 'Ranger' won't make it Irish", Walter proudly proclaimed, "It'll make it 'Rangero'" a Latin American-Spanish hybrid term for the phone was ringing.

The "Teddy Bears" nickname reflects the immaturity of the fans, they think that the players are actually teddy bears.

They have 5 stars on every Rangers top today. This is to help the players remember that they have five fingers and five toes at the end of each limb, and that during the game, if they should feel hungry, they should not eat their fingers or toes but should wait until the half finishes and then procure some of Glesga's finest deep fried fat to satisfy their hunger.

Kris Boyd has however managed to maintain his position up front in all queues in Burger King, Supermac's, Abrakebabra, McDonalds, Pizza Hut, Pete's Take-Away and Mizzoni's Pizza.

It's also worth to point out that when forwards Filip Sebo and Jean-Claude Darcheville were still Rangers players, the Govan club held the distinction of having the most overweight strikeforce in the known universe as the combined weight of those two was a total 397 kilos. Part of Rangers tradition (tradishun) is employing fat strikers, to mention Sebo, Darcheville, Boyd, Beattie and Cousin. 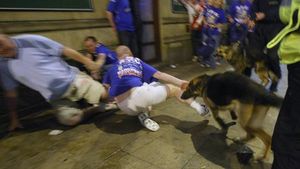 Off-duty Scottish policemen at the UEFA Cup Final in Manchester, where they clashed with grown-up law officers, a spawning the comically affectionate term "the manchester 49-ers". 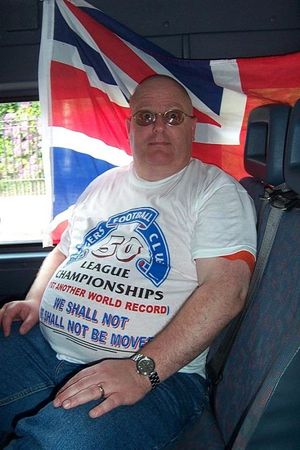 Rangers supporters, also known as Zombies, are servile dimwits who love the Queen so much that they fly the Union Jack as a sign of their stupidity and submissiveness to the English nation. 95% of them live in the east of Scotland giving rise to the famous phrase "Oh look, there's a stupid cunt from the east of Scotland supporting a Glasgow team". The Most famous Rangers fan is Pope Bob Malcolm The Second. A large portion of them tend to let others do their thinking for them, namely a Mr Martin Bain, Sir David Murray who is a famous Irish dancer and the BBC's special envoy to Ibrox, Chico Murray.

Rangers fans are incredibly stupid with an average IQ of about 5. This is not surprising when taking into account that they have been a third rate product for the last ten years. Who else would be so stupid as to think that they are actually good.

Rangers fans like to sing "Hello! Hello! we are the ladyboys! Hello! Hello! you'll know us by our groins. We're up to our knees in auld men's come, we want spunk on our thighs, for we are the Brigton ladyboys."

Rangers FC have a well publicized affiliation with SexToys R us, set up by the 6000 year old sex god Billy Reid, A physicist who's dog has a season ticket at Rangers.

They have a number of celebrity fans including Atilla the Hun, Adolf Hitler, that Junkie guy out of "The Scheme", Hugh Dallas, Paul Hogan, Col. Gadaffi, Gary Glitter, Musolini, The leave Britney alone guy, Graeme Dott and the referees and linesmen of Scotland. And famous singer Donald Findlay (the lawyer who successfully defended Peter Tobin and Luke Mitchell).

Rangers-also known as shite bastards- are one of the ugliest playing football team you will come across(even stoke play better football) they tend to play a 5-5-0 formation then make a giraffe called kyle laugh at ya run after it.this normally ends up in him injuring himself. Rangers fans often sing "WE ARE THE PEOPLE" this was a tradition brought to the slopes of Ibrox when everyone around the world compared the supports behaviour and genral look to that of animals. They then chanted "WE ARE THE PEOPEL!" ...However this just confirmed they do have the intellect of said animals. Rangers fans dispute the claims that their songs are all based on sectarian issues. Their songs include "The Billy Boys" (About killing catholics in Ireland in 1690), "Big Jock Knew" (where they sing about the fact that former manager Jock Wallace" knew the club would never win a European Cup like Celtic), The Famine Song" (where they ask Celtic fans to "Go Home" to Ireland) and "Follow Follow" (where they tell the Celtic fans that If they do go to Ireland, "[We] will follow you"). 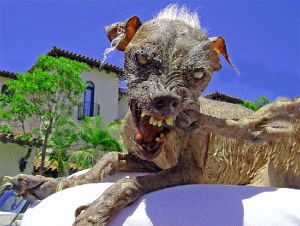 Former Rangers hero Barry Ferguson taking some sun while on holiday in Benidorm.

Following some dodgy tax payments, or lack of, during the "Big Dick" years R*ngers entered administration on Valentines Day (hereafter referred to as "Administration Day") 2012. This lead to as many as 12 angry supporters to turn up at Ibrox with an illegible message scrawled on a dirty bedsheet believed to read "Wee wan ore clud bak Wyte". Craig Whyte, owner of Rangers and part time "legned", then made an escape to the south of France to avoid being stabbed by huns. In his absence Hector the Taxman has taken control of the club during their most successful run in recent memory as they sit 20 points behind their rivals Celtic who have since set two Guinness World Records for Jelly and Ice Cream consumption and longest continuous laugh (which at the moment has lastest 3 weeks, 4 days, 3 hours, 24 minutes and 36 seconds).

In the weeks following Hector's takeover Rangers up to 300 Rangers fans turned up at Ibrox to see their team beat 1-0 by 11 Killie Pies. Supporters decided to show their support for the time by singing such classic Rangers songs as The Sash, which recalls the 1690 BC victory of King Billy over the hetreosexuals, and Father's Advice, which is set to the tune of the more famous Fields of Athenry. These songs, along with God Save The Queen (The Irish National Anthem), won Rangers fans the FIFA Award of "Most Culturally Confused Fans" a record 54 times. Hector proceeded to broker a deal in which Rangers would merge with Sister (and long term incestuous lover) club Hearts. The new could were named Heart of Midlothian Rangers Club, or HMRC, for short although the name remains Provisional at the moment.

During the 2012 Accademy Award ceremony the newly formed HMRC FC won two Oscars as Craig Whyte picked up best Director and the club as a whole won best comedy.

Sevco, a club which former Rangers supporters have now started supporting play in SFL Division 3; the fourth tier of Scottish football. This fledgling club have never won a match away from home and have had to give away tickets for free so that people would visit "The Big Hoose" to see them overcome Motherwell in a shock victory for the Division 3 minnows. Sevco crashed out of the Ramsden's (aka Wee Diddy Cup) to Queen of the South and lost to Stirling Albion 1-0 in the league; Stirling at the time being the worst team in the Scottish professional ranks, outwith Sevco of course.