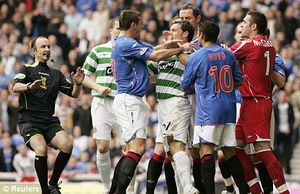 A typical passage of play in fitba, which is charecterised as aggressive yet boring.

Fitba is an obscure code of football which is similar but inferior to the noble game of football (Soccer - for the benefit of Yanks that think their stupid egg chucking game should be called football). Fitba is peculiar to Scotland due to the long periods of tediously boring play referred to by Scots as "games". 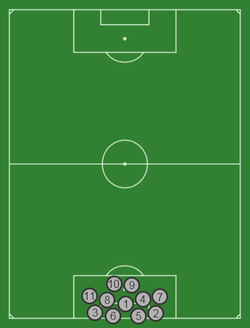 The term fitba was invented in Scotland in the 15th century as a way of getting around the Football Act 1424 which stated "it is statut and the king forbiddis that na man play at the fut ball under the payne of iiij d" which translates into English as "The King says He'll fine you 4 pence if you play football".

The early code of fitba allowed the "charging" pushing and holding of opposing players, traditions that are still alive to this day in the modern game of fitba.

It is thought that the game of Fitba inspired English private school toffs to rip off and codify the game under less aggressive, dangerous and boring rules, which went on to become known as association football.

There have been many failed attempts to unify the sports of fitba and football, mainly due to Scottish stubbornness and unintelligibility and their intractable antipathy towards the English for the theft and bastardisation of their game.

Back when the thieving English toffs considered the payment of players in any sport unthinkable, the Scottish Fitba Association were pioneers in the professionalisation of sport.

Professionalisation of fitba began when Scottish fitba clubs realised that huge numbers of Scottish players were abandoning the dangerous and boring game of fitba to play the English variant of the sport. The clubs were allowed to begin paying players to retain their services, but the most talented players such as Kenny Dalglish continued to abandon fitba in order to journey south to play football in England. This trend continued until the talent completely dried up in the 1990s, resulting in leaden footed cloggers like Darren Fletcher embarrassing themselves and everyone else by trying and failing to play proper football. 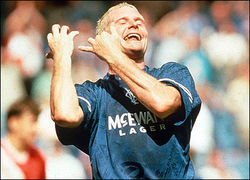 There are many other sectarian rivalries in fitba, including the Edinburgh derby played between Hearts of Jesus (Evangelical Christians) and The Hibs Jihadists (Islamic fundamentalists).

Sectarian violence and antagonisation are commonplace at fitba matches. It has been a regular occurrence that the the final score of games have been recorded as unknown. This is because all of the fans were to busy fighting and singing sectarian abuse at each other to notice the game and the referee got distracted by the slightly less boring goings on in the stands and joined in with the sectarian violence instead of officiating the game.

The Orange Glasgow Bigots Fitba Club have attempted to stamp out sectarianism by penning the conciliatory anthem, "the famine song" which has been sung by the Bigots fans as a friendly gesture towards the Celtic Supremacists. One hero of the Kick Sectarianism out of Fitba campaign was Paul Gascoigne who famously mimed the playing of the peace pipes to the rioting Celtic Supremacists fans. 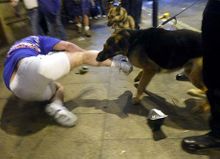 The syle of play has been described by experts as resembling "a 90 minute communal fight, featuring few tactics aside from aggression, intimidation and playing the victim when beaten".

Non-Scottish people find fitba notoriously difficult to watch due to the boring nature of the game and the relentless lack of technical skill.

Fitba fans enjoy the drinking, sectarian provocation and violence of a typical Saturday afternoon, but detest the actual watching of the game. It is thought that the sectarian violence began so that fitba supporters could have an excuse not to actually watch the game due to the severity of their injuries. 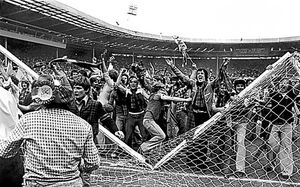 Before the 1977 England-Scotland game the Scottish fans broke the crossbar in order to avoid having to watch the game. Notice the elation of the fans upon the cancellation of the game.

The first serious attempt to integrate all the codes of fitba and football came in 1883 with the establishment of the Home International Championship, which featured an association football team (England), a fitba team (Scotland), a rugby union team (Wales) and a Gaelic football team (Ireland). The British Home Championship continued until the 1980s when the rest of the union finally gave up hope of ever seeing an interesting game involving the Scotland national fitba team.

In 1950 FIFA allowed Scotland to enter a fitba team in the football World Cup out of sympathy, however they have never got past the first round in any of the 8 World Cups they have played in.

In 1967 an exhibition match was staged between the fitba world champions (Scotland) and the football World Cup holders (England). The fitba team won the game through the ingenious tactic of boring everyone else in the ground into a comatose state and the Scottish people have never shut up about it since.

UEFA decided to allow fitba clubs to compete in European competitions as an attempt to wind up the English and in 1967 the Celtic Sectarians battled their way to the European Cup title with some of the most violent and dangerous play ever seen in Europe. They then faced an Argentine "Fútbol" team called Racing Club de Avellaneda in the Intercontinental Cup who made the inherent roughness of fitba seem timid in comparison to their murderous and sadistic level of violence.

Before the 1977 Home International Championship fixture between Scotland and England the Scottish fitba fans famously broke the goals at Wembley in order to avoid the tedium of watching the game.

In 1986 he joined English football team Manchester Red Sox Ltd as manager, where he introduced several fitba tactics including whinging, lying, stropping, playing the victim of injustice and the blatant intimidation of referees (by players and manager). He also introduced some tactics from Italian football such as diving, cheating and the payment of referees.

Scotland are the reigning world fitba champions having won 137 consecutive World Fitba Cups by default, through lack of other participants.

Other fitba championships include the Fitba Premier League, the Scottish Fitba Association Cup and The Other Fitba Cup.