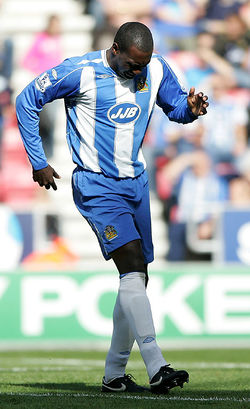 Emile Heskey doing what he does best.

For those without comedic tastes, the so-called experts at Wikipedia have an article about Emile Heskey.

Emile Heskey (born 11 January 1978) is a rather fast unemployed black man. He is famous in football for being famous despite having no discernible footballing talent. He remains popular with many, however, because he is a rather fast black man and that's actually quite useful sometimes.

Born in Leicester, he grew up knowing Gary Lineker as a childhood friend and constant presence. The experience rubbed off on him, and he started playing for Leicester in 1994 where he surprisingly scored several goals. He made his £11 million move to Liverpool[1] in 2000. Yeah, I know, £11 million. Anyway, after Liverpool realised that he was awful (it only took them four years) he moved to Birmingham City FC in 2004. They logically got rid of him by trading him to Wigan[2] in 2006 and he was then shipped to Aston Villa in 2009.

He made his England debut in 1999 against Hungary in a 1-1 draw in which he (to the surprise of many) nearly scored. He didn't, but it was close. He retired from international football after Euro 2004 and former team mate and England striking partner Michael Owen was not very sympathetic, saying, "Good riddance - he really is absolute bollocks." Coupled with being constantly slagged off by the press and the emergence of a powerful white skinned man up front he thought it best to call it a day.

Heskey was born in Leicester, Leicestershire, on 11 January 1978. He was a keen footballer and was originally a centre back (thus his awful finishing). He converted to a striker due to the fact that he could play as a target-man — basically a striker who is big and can head the ball but can't actually do anything else. At the age of 15 he went to a trial with Leicester City but was refused because he was too crap. Heskey, determined to play professional football, went to the Leicester City chairman and said "Is it coz I is black?" at which point the Chairman replied, "No, it's because you're shit.[3] Now get out of my room." However, a year later, tragedy struck as 98% of the population of Leicester was wiped out in the Leicester Flu Disaster of 1994. This included most of the football team. With the football club short of players and Heskey being one of the few survivors of the flu epidemic, he was signed up as the Leicester team adopted the "Sign Whoever Is Still Alive Policy".

He made his debut a year later in the FA Cup, sponsored by McDonalds, Coca-Cola, Barclays, Nestle, Asda, Tesco, Sky Sports, Facebook, HMV and Al-Qaeda. Leicester won 1-0 courtesy of an Emile Heskey wonder goal. Well, I say "wonder goal", but it was actually pretty awful, but the fact that Heskey scored alone makes it wondrous.....[4]

Anyway, during that season, Heskey managed to establish himself as a regular (despite not having one shot on target for the rest of the season). He won the League Cup (a.k.a. The Cup That No one Cares About) in 1997 and 2000.

Liverpuuuulll (as a native would pronounce it)

Heskey was signed by Liverpool in an £11 million move in 2000. When asked at a press conference why he had paid so much for Emile Heskey Liverpool manager Gérard Houllier replied, "Emile Heskey?! Sacre bleu! I thought I was buying Andy Cole!" Heskey made his debut against Manchester United that season as a 90th minute sub with Liverpool winning the game 1-0. He was brought on to hold the ball up and time waste for the last few minutes. At 1-0 up, Liverpool were heading for the first win against Manchester United at Old Trafford for 40 years, but amazingly Heskey scored two own goals in the last two minutes of injury time.[5] Interviewed after the game, at how he amazingly scored 2 own goals, Heskey replied, "I don't get it, why is everyone moaning at me? We were shooting that way in the first 45 minutes!"

After being re-educated on the rules of football Heskey had a good season scoring an amazing three goals. This equates to roughly £3.67 million per goal. The next season was even better, with Heskey scoring an astonishing two goals. In 2002, Gary "Walkers" Lineker attempted to buy his favourite club and Heskey's old club, Leicester City, and Heskey was linked with a move back. In the end the deal didn't go through because Lineker wasn't willing to make the chairman's buy-out valuation (30p). "The fact is, with 30p, I could buy a pack of scrummy Walkers crisps and I'm not going to turn that down." Heskey then continued the 2002 season at Liverpool, in fine form, even scoring a goal or two.

However, Heskey was injured for the majority of the 2003 season with a broken penis. When asked why he spent so much time out with a broken penis Heskey replied, "I didn't want to aggravate it and cause a serious injury, I mean if I fuck too many women too hard, my playing career could be over." Heskey returned in early 2004 and scored his 10th goal in the 200th game at Anfield against the formidable Oxford United. He was later asked about his goal scoring record, to which he replied," Why do people keep having a go about my goal scoring record? I mean, how many of them have scored ten goals? Well!? I'd like to know that and then I'll discuss my goal scoring record."

After falling out with Gérard Houllier, Heskey signed for Steve Bruce's Birmingham City for a fee of £6.5 million. At the press conference Steve Bruce said "Houllier!! The lying bastard, he told me I was buying Andy Cole!" He had his most prolific season in football scoring five and a half goals in his first year. The second year at Birmingham, Heskey had a poor season not scoring at all as Birmingham were relegated on two points. With Birmingham relegated Steve Bruce moved, as did Heskey.

Heskey was signed by Wigan Athletic for £5.5m during July 2006. Steve Bruce was reported only to have bought back The Heskilator because he gave the fans a few laughs. During his three-year stay at Wigan, Heskey, along with Titus Bramle, was voted the Worst Ever Footballer of All Time in The Premier League. Yes, that's right. Even worse than Taibi.

Heskey was released from Wigan in January 2009 after Steve Bruce said "Like Little Britain, the thought of Heskey playing for us just isn't funny anymore." He was signed by Martin O'Neil a week later - his former manager. The media was puzzled as to why O'Neil signed Heskey but then when in the next week's Hello pictures were published of their gay wedding it all became clear. Aston Villa issued a statement saying,"The fact that Martin and Emile are married has nothing to with Emile's recent signing to the club."

After scoring one goal in one year his contract was not renewed.

Heskey made his England debut in 1999 against Hungary in a 1-1 draw and impressed the people as he actually had a shot on target. In 2001 Heskey scored as England beat Germany 5-1 prompting allegations of match fixing. He was then called up to the 2002 World Cup but failed to impress. He came under scrutiny after his comments about that goal by Ronaldinho appeared to criticise David Seaman. His actual words were: "If our long haired hippie of a keeper had had a haircut he might have been able to see it coming."[6] Heskey continued to play in the England squad despite his comments about the hippie goalkeeper, Seaman. His place in the squad was later put under threat when Toy Story star Mr Potato Head was granted British citizenship and then called up to the England squad. He was actually surprisingly good for a potato. Heskey was called up to Euro 2004 but didn't make an appearance and retired from international football shortly after. He received a shock call up in 2009 and opted out of retirement, saying, "I'm very pleased to be called up - I just hope Capello knows who I am. I'm sick of people thinking I'm Andy Cole." At which point Capello replied, "Shit."